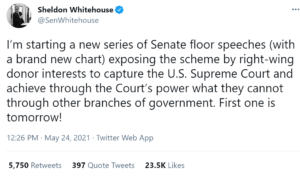 Unless he has found a new conspiracy to worry over, this likely means another round of denunciations of right-leaning and libertarian organizations that engage in legally protected free speech but commit the offense of saying things Whitehouse disagrees with. Previous targets have included dozens of think tanks and other policy organizations, such as the Competitive Enterprise Institute, the Judicial Crisis Network, the Federalist Society, and the Pacific Legal Foundation.

This is an old act.

In a prepared statement in front of a congressional committee last fall Whitehouse went so far as to imply that some of these ideological opponents were traitors: “This has the earmarks of a massive covert operation, screened behind dark-money secrecy, run by a small handful of big special interests, against their own country.”

Later that day, the Wall Street Journal editorial page slapped him for the outrageous hyperbole: “Mr. Whitehouse sees his opponents as treasonous, though all of what he denounces is legal and protected by the First Amendment.”

But this conduct is so common that the Sheldon Whitehouse profile on InfluenceWatch contains a section headlined “Enemies Lists,” so named because one of the think tanks in his crosshairs accused him of keeping an “enemies list.”

The thing about enemy lists is that they rarely get smaller. The full Whitehouse profile can be viewed here. The “Enemies List” section currently reads as follows:

Whitehouse has delivered more than 200 speeches on the Senate floor dedicated to climate change and other environmentalist topics. He has accused some in the energy industry of acting like “thugs” who “own the joint” (meaning the U.S. Congress), and has declared government officials who oppose him to be “stooges” of the energy industry.

In a May 2015 opinion piece in the Washington Post, Whitehouse advocated a federal lawsuit against the energy industry using the Racketeer Influenced and Corrupt Organizations (RICO) Act. Originally designed for and used in criminal cases to prosecute the mafia, RICO has a civil-lawsuit component that has since been applied to corporate targets such as cigarette manufacturers. Whitehouse admitted he did not “have enough information” to know whether “racketeering activity” had actually occurred with the energy industry, but speculated the civil discovery in a RICO lawsuit might uncover the evidence. In March 2016, then-U.S. Attorney General Loretta Lynch announced she had referred Whitehouse’s RICO concern to the FBI.

In July 2016, two months after the Attorney General of the U.S. Virgin Islands sent a subpoena demanding private internal research records, communications, and donor information to libertarian think tank Competitive Enterprise Institute (CEI), Whitehouse led a group of 19 U.S. Senate Democrats in a two-day series of floor speeches denouncing CEI and many other free-market think tanks, with Whitehouse saying the research organizations were part of a “filthy thing in our democracy.” The Senate campaign was aimed at passage of a Congressional resolution that would have called on the non-profit groups to cooperate with “active or future investigations” of their climate-policy positions that might be launched against them by federal or state law enforcement officials.

The CEI president responded, saying Whitehouse had become the “new Sen. Joe McCarthy,” and that it “is unhealthy for democracy and abusive when members of Congress create an enemies list based on policy positions.” A joint letter sent to all of the Democratic Senators from 22 targeted think tanks stated: “Your threat is clear: There is a heavy and inconvenient cost to disagreeing with you. Calls for debate will be met with political retribution. That’s called tyranny. And, we reject it.”

Whitehouse demanded a more-serious pursuit of a RICO case in 2018 and complained that Democrats still “haven’t done the basic due diligence prosecutors do putting an org chart together against a criminal enterprise.”

Whitehouse was the lead witness during a September 22, 2020, subcommittee hearing of the U.S. House Judiciary Committee titled: “Maintaining Judicial Independence and the Rule of Law: Examining the Causes and Consequences of Court Capture.” The committee, controlled by a Democratic-majority, had invited Whitehouse to share his allegation that right-of-center advocacy organizations were exerting an unfair advantage over the selection of appointees to the federal courts and the U.S. Supreme Court. In a July 2020 news release, jointly signed by Sen. Dianne Feinstein (D-CA), Whitehouse had accused these ideological opponents of a “decades long effort” to “rig the courts.”

Whitehouse read to the committee a brief 1100-word opening statement in which he mentioned Leonard Leo of the Federalist Society for Law and Public Policy three times, at one point accusing Leo of playing a lead role in a large network that “has the earmarks of a massive covert operation, screened behind dark-money secrecy, run by a small handful of big special interests, against their own country.” Whitehouse also identified the United States Chamber of Commerce and former U.S. Supreme Court Justice Lewis Powell as among the progenitors of this alleged network, which he accused of seeking to roll back “civil rights and women’s rights” and perpetuating “evil that makes other evils possible.”

After reading his prepared remarks and being thanked by Rep. Hank Johnson (D-GA), the committee chair, Whitehouse stood up, walked out of the hearing room, and refused to take questions. This occurred over the objections of Rep. Jim Jordan (R-OH), who—while Whitehouse was still in the room—asked: “He came in here and leveled all sorts of accusations against Republicans and he is not going to take any questions from us?” Chairman Johnson replied: “Our agreement with the senator is that he would not take questions.”

In an editorial posted hours later the Wall Street Journal editorial board quoted Whitehouse’s statement and criticized him for making a baseless accusation of treason against mere ideological opponents: “Mr. Whitehouse sees his opponents as treasonous, though all of what he denounces is legal and protected by the First Amendment.”

The Journal’s editorial board also criticized Whitehouse for “refusing to abide by the normal practice for congressional witnesses of answering questions.” The Journal editors titled their essay “Sheldon Whitehouse Goes Dark: The Senator refuses to take questions about his own dark-money ties,” and stated a theory for why questions were not permitted:

Mr. Whitehouse knew that, if he answered questions, he was under legal obligation to tell the truth. House Republicans might have asked him about the dark-money outfit Arabella Advisors. This for-profit entity oversees nonprofits including the Sixteen Thirty Fund and the New Venture Fund, which together reported nearly a billion dollars in revenue in 2017 and 2018.

Arabella affiliate Demand Justice ran a smear campaign against Brett Kavanaugh and is now calling for Democrats to pack the Supreme Court. Demand Justice bills itself as a “project” of the Sixteen Thirty Fund and the New Venture Fund, and in public disclosures it lists the same office address as the two nonprofits.

One day earlier the Wall Street Journal editorial board posted an editorial anticipating Whitehouse’s testimony and suggested the hearing was “a chance for the Republican minority to ask Rhode Island Senator Sheldon Whitehouse about his ties to what he likes to call “dark money” and court packing.”

When a Daily Caller reporter asked Mr. Whitehouse last year if Demand Justice and groups like it have donated to his campaign, the Senator replied, “hope so.” So has he received money from Demand Justice and other Arabella affiliates? Has he collaborated with them to block President Trump’s judicial nominees?

[ . . . ] Curious minds may also wonder if any group that directly or indirectly receives funding from Arabella has paid for the briefs Mr. Whitehouse has filed at the Supreme Court. One of those briefs threatened the Court with being “restructured” if it didn’t rule the way he and four Senate colleagues demanded.

Prior to the September 22 testimony, Rep. Johnson gave Whitehouse a routine warning that written and oral statements provided to the committee by a witness were subject to “penalties of perjury.” Johnson then specifically cited the applicable federal statute.