Sharpton and the Unions: A Follow-Up 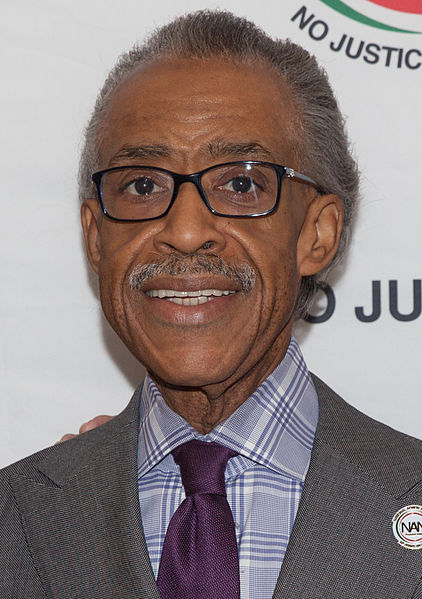 Summary: As we reported in the October 2015 Labor Watch, the Reverend Al Sharpton has been, for more than three decades, a key figure in extremist politics and in hoaxes that have had a major impact on American politics. He has become one of the most influential people in the country, with close ties to New York City Mayor Bill de Blasio and to President Obama, and to the nation’s top labor unions. In this follow-up report, frequent Capital Research Center contributor Carl F. Horowitz goes inside a conference that brought Sharpton’s organization together with union officials.

In this country, labor unions are the principal engine of egalitarian economics and its most potent political vehicle, the Democratic Party.  And as the party platform heavily overlaps with black-identity politics, union leaders have become prominent supporters of “civil rights” demagogue Al Sharpton and his New York City-based nonprofit group, National Action Network (NAN).

The union-“civil rights” bond was in clear evidence earlier this year at Manhattan’s Sheraton Times Square Hotel in the form of a discussion panel, “The State of American Labor Unions Today,” one of nearly 30 held during the NAN annual convention.  The speakers gave the overwhelmingly black audience of about 100 people ammunition for more union organizing, government programs, and “anti-racist” activism.

Organized labor and black civil rights long have marched hand in hand, literally as well as figuratively.  Al Sharpton knows this.  And he knows many labor leaders across the nation on a first-name basis.  That’s why one of the panels of the latest NAN extravaganza consisted of partisan union officials and their allies.  Black Americans have a greater tendency to be unionized than other persons.  According to the Bureau of Labor Statistics, 13.6 percent of all U.S. black workers in 2015 belonged to a labor union.  The respective percentages for whites, Asians, and Hispanics were 10.8 percent, 9.8 percent and 9.4 percent.

In this country, labor unions are the principal engine of egalitarian economics and its most potent political vehicle, the Democratic Party.

The principal speaker on the panel was J. David Cox, national president of the American Federation of Government Employees (AFGE).  Cox, whose Washington, D.C.-based union represents roughly 675,000 federal and District of Columbia government workers, expressed the belief that most social problems in this country could be solved with large increases in union membership.  Unions, he argued, drive human progress more than any one type of institution.  Moreover, they are natural allies of racial minorities and women.  Cox stridently denounced the recent challenge by Rebecca Friedrichs and her co-plaintiff teachers to the public-sector union practice of forcing nonmember workers to pay partial dues (“agency fees”).

(A victory by Rebecca Friedrichs would likely have crippled government-employee unions. Justice Antonin Scalia had been widely expected to provide the fifth vote in favor of Friedrichs, but he died in February 2016. In March, the Supreme Court deadlocked at 4-4, effectively letting stand a federal appeals court dismissal of the case. The new president, Donald Trump, has pledged to fill the Supreme Court vacancy with someone whose views are similar to Scalia’s, so the Court may have another opportunity to examine the issues in the case.)

The interests of public-sector labor chieftains and National Action Network are, for all intents and purposes, identical.

Cox’s combativeness was reflected in the comments of others on the NAN panel.  Jill Furillo, executive director of the New York State Nurses Association, spoke of her organization’s successful campaign to prevent hospital closings, singling out National Action Network for praise in siding with union workers.  She declared:  “We must be advocates for communities.”  Brianne Gorod, chief counsel for the hard-Left Washington, D.C.-based nonprofit legal group, the Constitutional Accountability Center, echoed union positions on economic issues.  “It’s time to give America a raise,” Gorod said.  “People need a raise, whether or not they belong to a union.”  Like Cox, she expressed relief over the Supreme Court non-ruling in Friedrichs and anger over the plaintiffs even being given legal standing.

There was more.  Henry Garrido, executive director of the New York City-based American Federation of State, County and Municipal Employees District 37, bellowed:  “There is an open war on labor in this country.”  As an example, he cited the recent passage by the State of West Virginia of a Right to Work law designed to protect private-sector workers from making mandatory dues or other payments to unions.  The Right to Work idea, the AFSCME leader added, was originated decades ago by a “white racist.” Garrido also skewered the widely loathed (by unions) Wisconsin public-sector reform law of 2011, claiming, without attribution, that it has led to drastic cuts in wages and benefits, and a doubling of fatal workplace accidents.  Shane Harris, a black San Diego pastor and head of the National Action Network chapter in that city, offered loud if not necessarily persuasive commentary, arguing that unions should be seen as human rights organizations, and not simply labor organizations.  Unions, emphasized Harris, are a reflection of a struggle for justice in every aspect of life and thus require everyone’s full support.

Thanks to union support, Reverend Al and his allies are more equipped than ever to launch misleading campaigns against white “racists.”

The panel might have produced even more fireworks had a pair of invited speakers shown up.  The would-be attendees were Randi Weingarten, president of the American Federation of Teachers (AFT), and George Gresham, president of Service Employees International Union (SEIU) Local 1199, the latter now representing more than 400,000 workers in New York City and elsewhere in mainly northeast states.  These are two of the most powerful union leaders in the country.  The AFT, more than any labor organization, supported Hillary Clinton’s presidential campaign of 2008.  And it worked overtime to get her elected in 2016.  SEIU Local 1199 also provided crucial help on behalf of the Obama White House in securing congressional passage of the Affordable Care Act of 2010 (“Obamacare”).

The interests of public-sector labor chieftains and National Action Network are, for all intents and purposes, identical.  That’s why the AFGE, AFSCME, AFT, SEIU and New York State Nurses Association each helped bankroll the NAN convention this April.  And, no coincidence, that’s why NAN set up a labor issues panel for top representatives of these very organizations.  Unions, especially public-sector unions, are moving ever further leftward, especially on racial issues.  Al Sharpton knows who his friends are.  Thanks to union support, Reverend Al and his allies are more equipped than ever to launch misleading campaigns against white “racists.” All to the benefit of the National Action Network and its political allies.