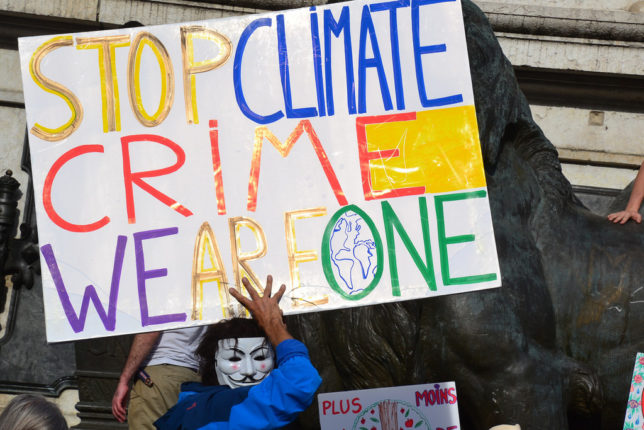 This article originally appeared in the Washington Examiner on April 5, 2019.

A Swiss organization, cloaked in secrecy, is funding a front group in Canada, co-opting local governments to sue Canadian and American energy companies for alleged climate change damages. The deep-pocketed and opaque Switzerland-based Oak Foundation’s funding of a campaign to promote climate change litigation is starting to bear fruit in British Columbia, similar to efforts in the United States.

The campaign is beginning to face blowback from those who are willing to ask what these campaigners hope to accomplish with these lawsuits and whose interests they are serving.

In January, Victoria, the capital of British Columbia, received national attention across Canada when the city endorsed filing a class action lawsuit against fossil fuel companies alleging damages from climate change, making it the first Canadian municipality to do so. The city is also calling on municipalities around the province to explore additional avenues for climate change litigation.

Another critical turning point in this campaign came last November when the mayor of Whistler, a small town in British Columbia that serves as a major ski destination attracting tourists from all over the globe, penned a letter to energy companies asking them to “pay a fair share of the costs of climate change” that he says affect his community. The letter drew the ire of energy companies, who immediately responded by scrapping their portion of an investing conference that was set to take place in the city the following February.

As it turns out, Whistler and Victoria are just two of 20 British Columbia towns that have sent similar letters to energy companies since the summer of 2017. Behind the push is an outfit known as West Coast Environmental Law, a legal advocacy group based in Vancouver, British Columbia, which has been orchestrating the letter-writing campaign targeting the oil and gas industry.

Perhaps of greater concern, however, is that the Oak Foundation gave a grant of $100,000 to WCEL in 2015 “to support the emergence of a public and legal narrative that fossil fuel companies and other large-scale greenhouse gas producers in the U.S. should pay compensation for the damages caused by their productions and operations.”

U.S.-based foundations typically have a transparent organizational structure and fully disclose their assets and grants in 990 tax filings. Not so with the Oak Foundation, which provided more than $350 million in grants in 2018 alone. Its U.S. foundation, however, only holds about $34 million in assets. That’s a sure indication that only a small portion of Oak’s activities are subject to public disclosure.

This foreign foundation is pumping millions into an effort to turn brother against brother, and in the end, the only winner will be the lawyers who score untold millions in attorneys’ fees. Oak, WCEL, and others tell these communities that their lawsuits will help fight climate change, but the reality is far different. The likely result of this litigation will be to put many thousands of workers out of a job, without curbing any of the demand for the product they’re producing, and without reducing any of the emissions these campaigners wish to abate.