Senator Leahy Stands Up to Terrorist 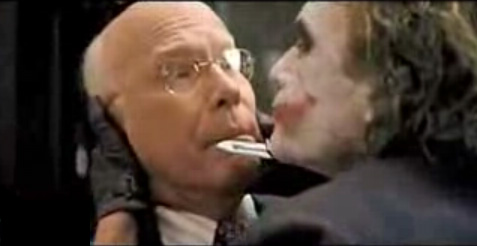 Leahy, chairman of the Senate Judiciary Committee, a man who’s done everything in his power to obstruct President George W. Bush’s efforts to fight Islamofascist terrorism, has a cameo appearance in The Dark Knight.

The Hill reports that in the movie Leahy confronts Batman’s nemesis, the Joker, played by the late Heath Ledger. (See screen capture above from a clip of the movie on youtube.com.)

“You know you remind me of my father. I hated my father,” replies the Joker as he threatens Leahy with a knife.

Perhaps Senator Arlen Specter (R-Pennsylvania), who periodically plays a conservative lawmaker on C-SPAN, should have been cast as Two-Face in the movie instead of Aaron Eckhart.