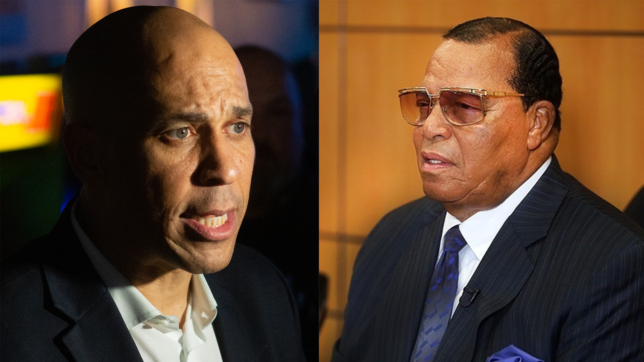 New Jersey senator and Democratic presidential candidate Cory Booker has been embroiled in controversy over comments he made about the possibility of meeting with Nation of Islam (NOI) leader Louis Farrakhan. However, the senator’s ties to Farrakhan appear to go deeper than previously known; in fact, Booker seems to have recently sent a letter asking for support from a pro-reparations group that honored Farrakhan this week and is deeply tied to the anti-Semitic, racist NOI leader.

On June 5, Booker sent a letter to the National Coalition of Blacks for Reparations in America (N’COBRA). In the letter shared on Twitter by Howard University Department of Afro-American Studies chair Greg Carr, Booker asked N’COBRA to “join me in building support for S. 1083 in the Senate,” Booker’s reparation proposal which was introduced in April:

We have begun! The 30th annual national convention of @NCOBRA40 is underway at the @TheWrightMuseum in Detroit. The oldest coalition of Africans struggling for #Reparations , locally and globally. #ADebtStillOwed pic.twitter.com/Bpof6qBF8l

I am honored to be among the invited speakers for the 30th Annual National N’COBRA Convention being hosted this weekend in Detroit. https://t.co/qg4YUFxWYI #Reparations #Farrakhan pic.twitter.com/PxDF1F87fZ

In March 2019, N’COBRA wrote on its website and tweeted about Farrakhan endorsing the 30th Annual N’COBRA Convention:

Today our leadership team @Kamm29207971 & @DrConradWorrill met with @LouisFarrakhan and he has endorsed our upcoming conference in Detroit. More to come! #ReparationsNOW pic.twitter.com/gLinofRBlv 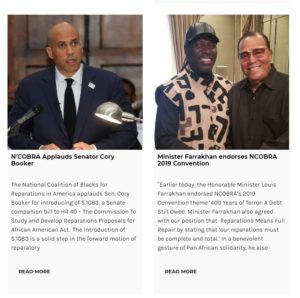 Farrakhan has long been a supporter of N’COBRA and N’COBRA has long supported Farrakhan. Information on the N’COBRA “events” page reveals that in 2005:

“The National Coalition Of Blacks for Reparations in America (N’COBRA) will mobilize and organize our members and Reparations supporters to attend the 10th Anniversary Million Man March/Day of Atonement called by Minister Farrakhan and the Nation Of Islam. On October 16, 2005, N’COBRA and Reparations Supporters are coming back to Washington DC, this time N’COBRA DEMANDS:  AMERICA MUST ATONE, REPARATIONS NOW!”

Similarly, Farrakhan’s The Final Call website details Farrakhan spoke favorably about N’COBRA on the eve of the Millions for Reparations March in 2002 and thanked them for inviting him:

“First to my dear sister, Ms. Dorothy Benton Lewis, thank you for your gracious introduction and invitation to be a part of a program with such distinguished brothers and sisters as Dr. Ron Daniels and Maulana Karenga and all of these wonderful, wonderful fighters, Dr. Conrad Worrill and Sister Viola Plummer and, the founder of the National Coalition of Blacks for Reparations in America (N’COBRA), my dear brother Dr. Omari Obadele and all of you. I’m honored to be in your company.”

According to Carr’s tweet, Booker’s reparations bill was explicitly discussed as part of the welcome from the N’COBRA co-chairs:

“Speaking of HR 40, introduced by Congresswoman Sheila Jackson Lee, and SB 1083, introduced by Senator Cory Booker, NCOBRA will unveil our national plan to get these bills before full Congressional debate. We are calling this action NCOBRA Action 535 (The number 535 refers to the 535 federal legislators in the House of Representatives and Senate.”

The Capital Research Center has reached out to Booker’s office for comment but has not received a response by publication time.