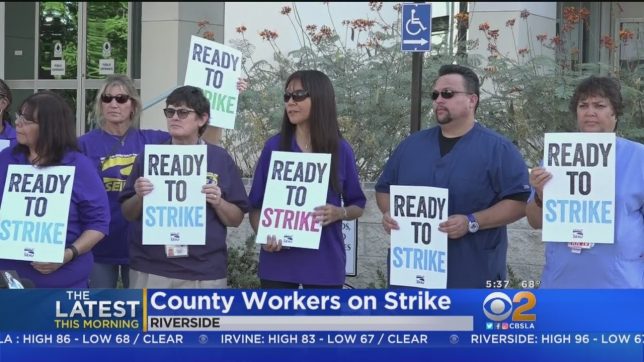 Healthcare workers in the Services Employees International Union (SEIU), Local 721 in Riverside County, California walked off the job to protest last week, forcing the county to spend $1.5 million on replacement medical personnel to ensure patients were properly cared for.

The employees announced their plans to strike on August 29 in a rowdy, disruptive protest during the Riverside County Board of Supervisors meeting. The county won a court injunction that prevented 1,000 of the would-be strikers from protesting because of the critical nature of their work in local healthcare services. However, the county was not able to avoid hiring replacement workers because of the short notice that SEIU members gave and the close timing of the court order to the beginning of the strike. The stop-gap measure ensured that emergency room operations continued without disruptions while the workers marched and chanted outside the University of California, Riverside Medical Center.

On Tuesday, the County Board of Supervisors closed a contract with Omaha-based Nurse Bridge Consultants, a temporary staffing agency, to fill future staffing gaps should the unionized healthcare workers strike again. According to the contract the county is prepared to spend up to $7 million to cover the expense of staffing the Moreno Valley hospital and a mental health treatment facility. A staff report to supervisors says the measure “will ensure (the county) fills the temporary staffing positions to meet requirements such as patient to nurse ratios.”

More than 7,000 of the county’s 20,000 employees are represented by the SEIU, the largest healthcare and public employees union in California. The local union has been without a new contract for about a year as negotiations have dragged on with county officials. Union leaders say a lack of transparency, unsafe working conditions, and employee harassment caused the strikes. But county officials say the strikes are an attempt to gain bargaining power for the SEIU in the contract negotiations. The county’s executive office spokesman, Ray Smith, told the local City News Service that the average SEIU-affiliated worker’s salary has risen 38 percent since 2012.

Capital Research Center has covered the SEIU’s attempts to gain a stranglehold on the healthcare profession in multiple states. The union, which is one of the largest in the United States, has even convinced pro-union governors to sign laws essentially conscripting home healthcare providers as official state employees. This led to the Harris v. Quinn Supreme Court decision in 2014 which ruled such practices unconstitutional.

Few working Americans follow Supreme Court cases, however, and many home healthcare providers did not know about their right not to join or pay dues to a labor union. When the Freedom Foundation – a free market think tank – attempted to inform workers of these rights the SEIU launched a “lawfare” campaign to bankrupt the nonprofit through frivolous lawsuits.