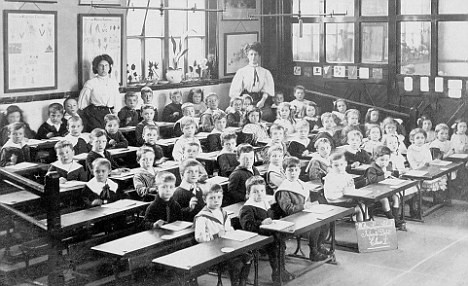 Every step in creating the statrix can be seen in the development of our public education system. I will elaborate more on this below, but to briefly offer a preview:

Public education is considered by many to be an essential function of the government. Without government-provided schools, many argue, we would have a highly inegalitarian society in which the children of the rich are educated at well-heeled schools such as Groton—a prestigious private school in Massachusetts that boasts Franklin D. Roosevelt as an alum—while the poor are left to fend for themselves, getting little or no education at all. After all, modern private schools are primarily for the rich, so where would poorer students get an education outside government-provided schools?

This view, however, simply takes the world as it is now, removes public schools, and holds everything else constant. But imagining a world without public education is not as simple as imagining, say, your street without street lights, or road signs, or missing a few of the houses across the way. For over a century, state-funded, -licensed, and -provided education has reformed the world and influenced the set of options we can imagine.

To truly understand the effects of public education on our world, we need to look at history. No one alive, at least in America and throughout the Western world, can remember a time before governments began spending substantial amounts on public education. Like Boris Yeltsin in the produce aisle, to us, the concept of privately provided education is almost mystifying. Many people confidently assert that an effective and egalitarian system of private education is an impossible dream.

There was never a specific moment in time when American state-funded education “began.” During the colonial period, some towns and communities contributed to education in a variety of ways, while others did nothing. Nowhere, however, was schooling either compulsory or fully tax-supported. Nevertheless, schools were common, as well as other sources of education such as churches, apprenticeships, and family instruction. The people demanded education for their children, and a network of private or mostly private schools was the result.

The late-18th and early-19th centuries were, of course, a very different time. Children were expected to work at very young ages, and families that had been farming for generations didn’t always see the benefit in having their children learn much more than the three Rs. Nevertheless, in the words of historian Carl E. Kaestle, “provincial America’s informal, unsystematic, local mode of schooling resulted in a relatively high level of elementary education and proved capable of expansion.”

Many rural schools were funded by both local governments and parental fees. Schoolmasters would charge quarterly fees and, according to Kaestle, the fees were “within the means of perhaps three-fourths of the population.” For the truly destitute, apprenticeships and church charity schools were available. New York had six charity schools in 1796, and Philadelphia had at least 12 by 1810.

And those private schools did an effective job of educating their pupils. Economist Albert Fishlow estimated that by 1840, before the emergence of a major movement for government-funded schools, more than 90 percent of white adults were literate (obviously, there were other barriers that hindered the education of African Americans and other people of color). As Fishlow writes, “popular education successfully preceded an extensive system of publicly supported and controlled schools.”

The movement for increased support for public schools arose in the 1830s and 1840s. Reformers were less concerned about how to better educate the people than how to mold uniform citizens. They didn’t call them “public schools,” they called them “common schools.” Common schools were, in the words of education historian Charles L. Glenn, a “deliberate effort to create in the entire youth of a nation common attitudes, loyalties, and values, and to do so under central direction by the state. In this agenda ‘moral education’ and shared national identity were of considerably more ultimate importance than teaching basic academic skills.”

The leaders of the common-school movement jumped to the head of a parade and pretended they were leading it. They convinced many municipalities and states to increase support for public schools. Yet, initially, rather than increasing the total number of children being educated, increased financial support for public schools simply crowded out private schools. For example, in Boston in 1826, before the common-school movement, 44.5 percent of children under 19 were in some school, with 32.6 percent in private school. By 1850, total school attendance had barely risen to 45.4 percent, but the percentage of students attending private schools had dropped to 12.2 percent. Because it is extremely difficult to compete against a subsidized competitor, government schools were crowding out private schools.

Local district schools became the target of common-school reformers who wanted larger school districts with more centralized supervision. By consolidating districts, creating systems for state regulation and supervision, and increasing funding, reformers hoped to not only do away with private schools, but also systematize and professionalize the process of educating children. Moreover, in a nation where immigration from Catholic countries, such as Ireland, was on the rise, common-school advocates thought independent private schools were inadequate for inculcating morality, discipline, patriotism, and cultural assimilation. Suspicion of Catholics, who were thought to be beholden to a “foreign despot” (i.e., the Pope), was particularly rampant. Separating those children from their parents to properly Americanize them was one of the goals of the common-school movement.

Over the decades, common-school reforms were adopted throughout the country and low-cost, secular private schools were slowly crowded out. In New York City in 1829, 62 percent of students were in private schools. By 1850, it was 18 percent. In Salem, Massachusetts, the number dropped from 58 percent in 1827 to 24 percent in 1846. In Milwaukee, private attendance rates fell from 61 percent in 1845 to 46 percent just two years later. Such numbers delighted common-school reformers. In 1868, the Illinois superintendent celebrated that “the public schools are steadily weakening and decimating private schools, and that they will ultimately crowd them almost wholly from the field.”

While the common-school reformers pursued some ignominious ends, such as nationalism and the forced acculturation of immigrants, they had some good ideas. They helped introduce “grade school,” wherein children would be “graded” and ascend through the ranks. They worked to professionalize and educate teachers. They fought for better school buildings and equipment. We should recognize these as earnest policies designed to make schools better.

Perhaps the privately-run local schools in the 18th and 19th centuries were inadequately serving their students. And, while there was an extensive network of charity schools and other low-cost alternatives, the old system certainly left people behind. Reforms were likely needed, particularly as the world became more urbanized and succeeding in life began to require more than knowing the three Rs. But those reforms did not have to come from the slow takeover of education by the state. Those reforms could have just as easily come from entrepreneurs seeking to provide parents with a better product. What the common-school reformers sought, however, was centralization and systematization—the great McGuffin of all bureaucrats—and effective, low-cost, non-centralized private schools would not help them achieve their common-school dreams.

But the history of American public education at least shows that government-funded schools aren’t necessary to the existence of schools, including schools for the poor and indigent. That, by itself, is an important fact that can help our imaginations break free from the statrix.

We can also look to developing countries around the world that have not yet instituted, or have only begun instituting, substantial government funding for education. That’s what James Tooley, of the University of Newcastle upon Tyne, has done for over 20 years, traveling to the poorest parts of the world—the slums of Lagos, Nigeria; rural Chinese provinces; remote Ghanaian villages—to search for private schools. In every instance he has found them, often thriving despite substantial public funding for education. Public funding and oversight haven’t yet entirely crowded out and eliminated private schools, but many are struggling.

In the poor shantytown of Makoko in Lagos, Tooley and his team found 32 private schools, none of which were recognized by the government, which educated around 70 percent of the school-age children. The large publicly funded schools in Makoko were viewed as inadequate for a variety of reasons, from lazy teachers, to large class sizes, to persistent teacher strikes. Yet the government still makes it difficult for the low-cost private schools: One proprietor complained that “we find it impossible to meet all their regulations; we can’t possibly afford them all.”

Schools in those regions like Makoko charge modest fees, usually between 4 to 8 percent of the minimum income level for the region. In addition, like schools in early America, charitable and subsidized tuition for the poorest students is common. And the schools consistently outperform the public schools, not only in educational outcomes but in other forms of parental satisfaction.

Tooley’s story, recounted in his remarkable book The Beautiful Tree, is one in which he constantly encounters state officials asserting that there are no private schools for the poor in their country. Private schools are for the rich, one Chinese official tells him, “our minorities don’t value education, so they will not invest in schools, they don’t care about their children.” Tooley’s team found 586 private schools serving the poor in Gansu province, enrolling nearly 60,000 children.

The existence of low-cost private schools for the poorest people in the world might surprise those raised in the education statrix. But what’s happening in the developing world is what happened in the United States, and learning these stories can help rejuvenate imaginations that have been enervated by the education statrix. That’s how we begin to entertain possibilities; new horizons of education not saddled by an ossified state-education system. The 19th-century model of education may have worked then, but the world has changed drastically. It’s time for something new, but not one single thing—that would commit the same centralizing fallacy as the common-school reformers—but many things, a thousand flowers blooming.

In the conclusion of Seeing the Statrix, learn how America’s Byzantine health care system was created by the American Medical Association.