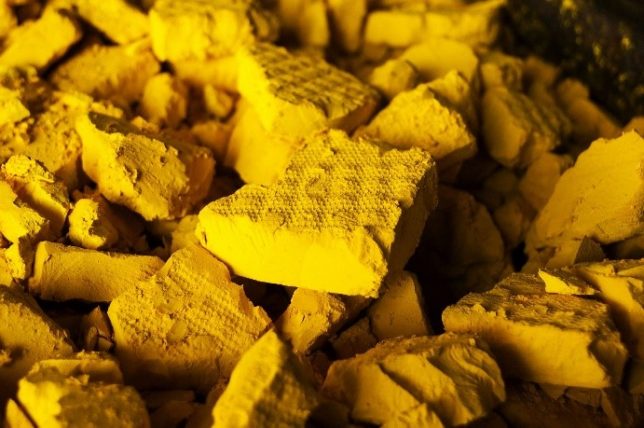 Import Race to the Bottom

The U.S. is beholden to Russia’s government-backed mineral industry, and former Soviet satellites Kazakhstan and Uzbekistan, for over 40 percent of total U.S. uranium imports. That number is likely to go higher because of the fragility of the entire U.S. domestic nuclear cycle—from exploration, mining, conversion, enrichment, and disposal—due to environmental activism and an unwarranted fear of today’s nuclear energy.

The result is a situation where the U.S. uranium miners cannot supply the needs of civilian nuclear reactors as there is a steady growth in demand for electricity. As a result, our country has become wildly import over-reliant despite America’s relatively vast geologic uranium endowment. According to the Energy Information Administration (EIA), the U.S.’s 99 civilian nuclear reactors are currently operating mostly on imported uranium, meaning that there is at least the potential for a partially compromised energy grid should relations with these uranium supplying countries deteriorate.

As of 2016, four major and eleven minor exporting countries provide almost all of the uranium to power U.S. nuclear reactors:[i]

The Politics of Uranium Production

In addition to the fragility of U.S. uranium mining and processing, the federal government has a history of making the uranium import over-reliance situation worse. For example, over the past decade the Department of Energy (DOE) routinely exchanged excess stockpiled uranium—some from decommissioned nuclear weapons—as payment to contractors for cleanup services at a DOE contaminated site in Ohio. Officially known as “barter,” this process apparently sidestepped the lack of congressional funding for various DOE site cleanups. [ii]

Contractors ultimately sell the excess inventory, which undercuts the relatively small U.S. uranium mining market. Unfortunately, for the past seven years, the DOE has bartered away more uranium than was produced domestically. And in 2016 and 2017 a milestone of sorts was reached when the amount bartered to contractors was more than double the amount of U.S. uranium production in both years.[iii] [iv]

If the DOE sold all of its uranium in the open marketplace, those funds would go to the U.S. Treasury, and not be transferred to the department in exchange for contract work. But, because bartering circumvents Congress’s power of the purse, the Government Accountability Office (GAO) declared it illegal in 2006 and again in 2011.[v]

However, the DOE persisted![vi] Finally, Secretary of Energy Rick Perry on March 20, 2018, suspended the practice of bartering excess U.S. uranium to contractors as payment, and mandated that funding for cleanup of DOE facilities should be only be provided through congressional appropriations. Unfortunately, years’ worth of damage to the market had already occurred.[vii]

America in the 21st century runs on electricity, which is why this issue is rightfully discussed within the context of national security. As the nation approaches 100 percent reliance on foreign uranium, there is always the possibility for an embargo or partial restriction of exports to the U.S. by one or more countries. Such action may not be as dramatic as a rare earth-related or other critical-mineral embargo, because the U.S. does have alternative forms of energy to supply power. But that reasoning seems to ring hollow in terms of the great value America places on its comprehensive approach to provide reliable and affordable energy to the nation. The U.S. previously declared “energy independence” and now the current administration policy is “energy dominance.” Neither will come to pass if we abandon the American uranium industry.

Thus, a key question remains. Why does the U.S. rely on adversaries and unstable countries for uranium supplies, especially when uranium is in relative abundance in our own land? Ostensibly, the U.S. could mine and produce many tens of millions of pounds a year, relying on friendly countries for the remainder.

Answer: Because uranium import over-reliance and uranium mining underperformance are locked together—each is caused by the other—and the cycle continues to spiral downward in a race to the bottom.

In addition to dwindling mining output, another problem that drives increasing imports is the United States’ limited capability to process uranium after the metal has been mined. Production of uranium concentrate (U3O8) in the U.S. now relies on the only conventional uranium mill in White Mesa, Utah, and six in-situ leach operations: four in Wyoming, one in Texas and one in Nebraska.

The White Mesa uranium processing mill in southeast Utah, owned by Energy Fuels, was idled during much of 2017 because of license renewal issues. During that time, all uranium mined in the U.S. needed to be sent to France and Canada for processing into yellowcake, and then reimported for conversion and enrichment and use in domestic nuclear power plants. It is hard to imagine why the nation would have to send something as critical as part of its nuclear fuel cycle out of the country for processing, especially due to heightened security concerns of yellowcake falling into the “wrong” hands.

As of February 2018 the White Mesa facility is again operational. However, America’s uranium processing capabilities are far too fragile still, and represent too much of a bottleneck to the country’s power generating capability (Figure 6).[viii]

In yet another blow to the U.S. nuclear fuel cycle, the nation’s sole uranium conversion facility that converts U3O8 yellowcake into uranium hexafluoride gas for later enrichment, was shuttered in November 2017 and has been idled since. Honeywell, the company in charge of the Metropolis, Illinois, plant, one of the few such facilities in the world, suspended uranium hexafluoride (UF6) production pending an “improvement in business conditions.”[x]

Honeywell made their decision to suspend production as the result of “significant challenges” faced by the nuclear industry. For example, they attribute decreased demand for UF6, especially from Japan and Germany, to the 2011 Fukushima nuclear incident in Japan. The company also sites current worldwide oversupply of UF6, an oversupplied uranium fuel cycle, and downward trend in uranium markets.[xi] .

Players such as Russia, Kazakhstan, and Uzbekistan, and some other uranium exporters are benefitting from the U.S.’s current uranium policy debacle by continuing to flood (“dumping”) the U.S. with cheap uranium to gain geopolitical leverage. Uranium “dumping” occurs because foreign uranium mining companies usually produce much more cheaply because they have huge advantages over American miners. For example, foreign mining companies are often subsidized by their governments, their environmental restrictions on mining are less stringent than the U.S., and the wages to their workers are significantly less than American miners. These factors combine to drive down American mining output.

In addition, American uranium production continues to decline under historically low uranium prices. During 2017 the price of uranium ore (U3O8) was between $20 and $25 per pound—lower than at any time since 2004.[xii]

Consequently, two U.S. uranium operators, Energy Fuels and Ur-Energy, on January 16, 2018, again petitioned the Commerce Department under Section 232 of the Trade Expansion Act of 1962 (as amended) to investigate uranium import dumping in the U.S. by Russia and its surrogates Kazakhstan and Uzbekistan. Both companies are seeking relief from imports of uranium products that threaten U.S. national security.[xiii]

But it gets worse. While the U.S. does not import significant quantities of uranium from China at this time, the Chinese have significantly grown their state-owned nuclear enterprises and announced that they intend to penetrate the U.S. nuclear market with nuclear fuel that will compete directly with U.S. uranium miners.[xiv]

In the conclusion of Russia’s Uranium Gambit, learn about the real Uranium One scandal.

[i] Energy Information Agency, Where Our Uranium Comes From, https://www.eia.gov/energyexplained/index.php?page=nuclear_where