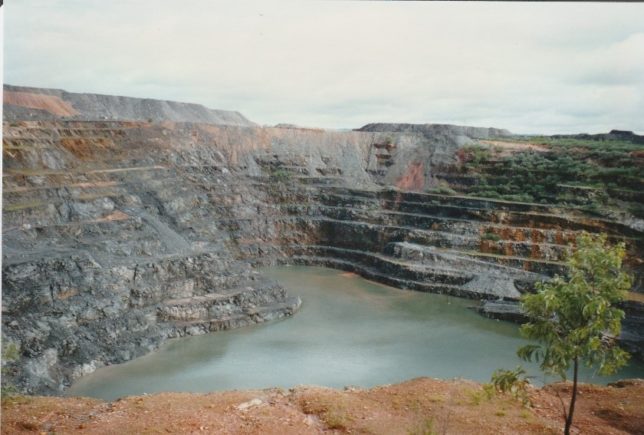 How Much Uranium Does America Have?

The western United States contains the country’s major sources of uranium deposits (Figure 2) and its production, including Arizona, Colorado, Wyoming, Nebraska, New Mexico, Utah, and Texas. In the East, Virginia has large untapped high-grade resources of uranium located along its southern border in Pittsylvania County. Some Western-state locations were made famous by their association with the discovery and mining of uranium over the past century. 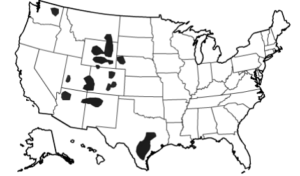 For example, Arizona’s uranium occurrences are known throughout the state in a variety of different geologic settings. By far the most uranium production has been from the Colorado Plateau known as the northern “Arizona Strip.” Previous exploration there has resulted in the discovery of numerous “breccia pipe” ore bodies. These deposits are attractive exploration targets because they represent the highest-grade deposits identified thus far in the U.S.[i]

A typical breccia pipe, shaped like a giant cylinder or funnel full of volcanic rocks, is about 300 feet in diameter and may extend 3,000 feet beneath the surface. Thousands of pipes occur at or near the surface, but only about one percent of them contain uranium ore. Since the 1980s, dozens of uranium-ore-bearing breccia pipes have been identified that have excellent potential for development as ore bodies. The total amount of mineable uranium discovered to date in northern Arizona is estimated to be in the range of 35 million pounds, but additional exploration will undoubtedly push that total much higher.[ii]

Meanwhile, in Colorado, some of the U.S.’s largest and highest grade deposits occur within the Rocky Mountain, Colorado Plateau, and Great Plains provinces. In fact, on the Plateau in southwest Colorado, more than 1200 uranium mine shafts were driven from surface outcrop into sinuous uranium ore bodies in what is known as the Morrison Formation (of dinosaur fossil fame). Following the uranium ore in the Morrison is difficult, and many mines were abandoned long ago. Modern exploration techniques suggest southwestern Colorado and the central Rocky Mountains remain good prospects for uranium production. Many abandoned Colorado uranium mines are being re-evaluated and production restarted.[iii]

In northeast Colorado’s Great Plains province, the uranium deposits do not outcrop at the surface, but are deeper underground, and are prime candidates for in-situ recovery. In situ recovery is a relatively simple process whereby a mixture of groundwater and dissolved oxygen is pumped into a deeply buried mineralized sandstone, where it contacts, dissolves, and leaches the uranium ore. The mineralized solution is then pumped back to the surface where the uranium is removed.[iv]

Farther north in Wyoming, uranium was first discovered in 1949, with production in the 1950s centered in the Gas Hills area and nearby Shirley Basin. Major discoveries in the late 1960s and 1970s also occurred in the Powder River Basin and in neighboring Nebraska.

Conventional mine production peaked in 1980, and decreased through the 1980s. Many in situ projects were placed on standby or shut down. However, at its peak, Wyoming uranium mining produced 12 million pounds annually, and roughly 210 million pounds of U3O8 since uranium was first discovered there.[v]

New Mexico’s Grants Uranium Region has been the most prolific producer of uranium in the U.S. Since 1948, over 347 million pounds of U3O8 have been produced from the region during the 40 years from 1950 through 1990. Since the 1960s, billions of dollars have been spent by U.S. government agencies (forerunners of the Department of Energy), and to a lesser extent the private sector, exploring for uranium in New Mexico, resulting in the discovery of classic uranium deposits in New Mexico’s San Juan Basin.[vi]

Surprisingly, Texas contains many shallow uranium deposits along the lower coastal plain in areas more commonly associated with oil and gas resources. In fact, the Texas Gulf Coast Uranium Region has been a surprise major producer of uranium in the United States. Texas production initially began in the early 1960s, resulting in over 76 million pounds of U3O8. This represents one of the largest concentrations of uranium production in the U.S.[vii]

Utah had the earliest uranium mining, beginning on a small scale in the 1870s and 1880s, with its ore shipped to France and Germany in 1884 for use in forming salts and oxides as colorants for ceramics and dyes, especially in the manufacture of glass and pottery, and also for use in photography and steel plating.

The eastern and southeastern regions near the basin margins of the Green and Colorado rivers contain deposits of uranium. There, Utah’s famous uranium discoveries of the 1950s created another “bonanza” period in Utah mining, and within a five-year period, almost 600 producers on the Colorado Plateau were shipping uranium ore. The associated bonanza in penny uranium stock established Salt Lake City as “The Wall Street of Uranium.”[viii]

Today, southeast Utah is home to the lone operating conventional uranium processing mill in the U.S. known as White Mesa—owned by Energy Fuels Company. The nearby Ticaboo uranium mill, owned by Uranium One—the company embroiled in the controversial buyout of U.S. uranium by Russian interests—is currently on standby. A significant number of past active Utah uranium mines are considering restarting operations depending on continued uranium price increases. In addition to the existing infrastructure, a number of companies are carrying out exploration programs for new resource areas in Utah.[ix]

Geologically, the U.S. would appear to have the potential for enormous uranium resources. However, despite this apparent abundance and the long history of uranium development in the West, the U.S. is a relative lightweight regarding the amount of “known recoverable resources” of uranium compared to other countries.

Known recoverable resources are concentrations of minerals that have a reasonable prospect of economic extraction—specifically because the location, grade, quantity, and continuity of the resource is known based on geologic evidence. Like other minerals, a uranium prospect is not a resource until enough work has been done to demonstrate a good understanding of the mineral occurrence, and the quantity and quality show the potential to make it an economic success.

The World Nuclear Association in 2014 compiled a list of the top 13 countries with the most known recoverable resources of uranium as a percentage of the world total (Figure 3). Number one is Australia with 29 percent, followed by Kazakhstan (12 percent), Russia (9 percent), Canada (8 percent) as the top four countries. The U.S. is ninth at 4 percent of the world total with roughly 208,000 tons, behind Brazil at eighth (5 percent) and ahead of China at tenth (4 percent).[x] 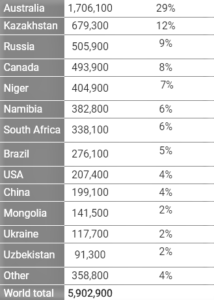 The same World Nuclear Association survey for 2015 indicates that Australia, Kazakhstan, Canada, and Russia are again the top four countries (Figure 4). However, in one year the U.S. ranking has slipped from ninth to fourteenth at 1 percent of the world total of recoverable uranium—sandwiched between Botswana and Tanzania, each at 1 percent.[xi]

As with other minerals, investment in geological exploration generally results in an increase of known resources. For example, worldwide exploration in 2005 and 2006 resulted in a 15 percent increase of the world’s known uranium resources. 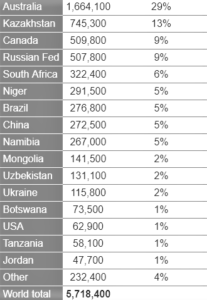 U.S. recoverable resources, on the other hand, have decreased roughly 145,000 tons or about 70 percent from 2014 to 2015 according to the survey data above—a very strong indication of decreased spending on exploration at a time when U.S. uranium mining and production needs to be stimulated to provide for private sector power generation and national defense and military readiness.[xii]

Over the past decade, U.S. mining output has been erratic, but it was cut in half between 2007 and 2017 due to decreasing uranium demand because of increasing cheap foreign imports and rising natural gas production. This can be compared to other major producing countries whose mining output has been either flat or on the increase during the same period as shown in Figure 5.

In summary, even though the U.S. is endowed with enormous uranium prospects, efforts at boosting exploration, mining, and production have all been trending steadily downward for almost the past 40 years. It will take exploration dollars to turn U.S. uranium prospects into additional resources and reserves, and a national commitment to turn those reserves into production needed to grow the nuclear industry back to profitability.

In the next installment of Russia’s Uranium Gambit, learn how Russia uses its surrogates to destablize the U.S. uranium market.

[i] Uranium Producers of America, http://www.theupa.org/what_is_uranium/