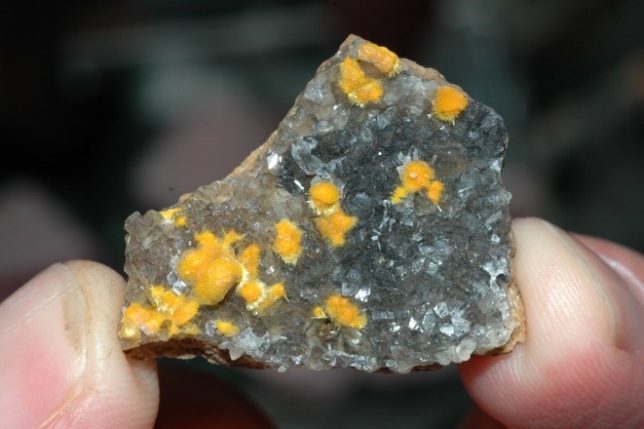 Like iron and bronze millennia ago, uranium is a metal that changed the history of the world. It plays a vital role in maintaining America’s national security, powering 20 percent of the U.S. Navy’s fleet, and is at the heart of the most ferocious implements of war ever created.

Uranium will probably always be a critical material no matter how much of a supply the U.S. has because it is the only naturally-occurring fissile element on earth—there is no real satisfactory replacement for what it can do. The U.S. imports over 90 percent of its uranium from a dozen countries around the world. Worse, it is over-reliant on Russia and two of its former satellite countries, Kazakhstan and Uzbekistan, for more than 40 percent of those imports.

Closer to home, uranium also provides electricity for at least 20 percent of American homes and businesses. However, American nuclear power has reached a tipping point—the once thriving U.S. uranium industry that was self-sufficient in the 1970s through 1980 has been in free-fall along with much of the rest of the mining industry over the past several decades.

Although the U.S. has abundant uranium resources and reserves, demand is shrinking for several reasons. Older nuclear power plants are reaching the ends of their life cycles and are being decommissioned rather than upgraded, and cheap foreign imported uranium is more cost-efficient for those newer nuclear plants that will be producing electricity on into the future. This is why reversing America’s dependence on so-called cheap foreign uranium will be very difficult under current market conditions. Also, cheap and plentiful natural gas is edging out uranium for power generation.

Sustained over-reliance on foreign uranium from potentially hostile countries without a plan to reverse that dependency is absolutely counter to the nation’s security. In addition, it flies in the face of basic understanding of geology, economics, trade policy, geopolitics, and technology surrounding the U.S.’s uranium abundance and use. Many of the same issues that plague the uranium industry resemble those which caused the nation’s over-dependence on China for rare earths.

Uranium is also found in most rocks and sediments, seawater, aquifers, and hot springs. Normally the amount of uranium in a given area is very small, but where certain geological conditions exist, uranium can be more concentrated and may be economically recovered.[ii]

Like other minerals, uranium mining operations consist of four primary stages—exploration, mining, mineral processing, and mine reclamation. Several of these stages can take place simultaneously, depending on the characteristics of the operation. The mineral processing stage for uranium is the basis for the nuclear fuel cycle (Figure 1).[iii] 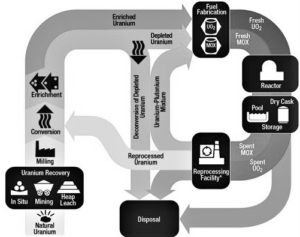 Stages of the Nuclear Fuel Cycle

The nuclear fuel cycle is what happens to nuclear fuel from its creation to disposal. Uranium is processed in different chemical and physical forms to create nuclear fuel.

In the next installment of Russia’s Uranium Gambit, learn about America’s vast uranium resources—and why these resources remain largely untapped.

[i] Uranium Producers of America, http://www.theupa.org/what_is_uranium/