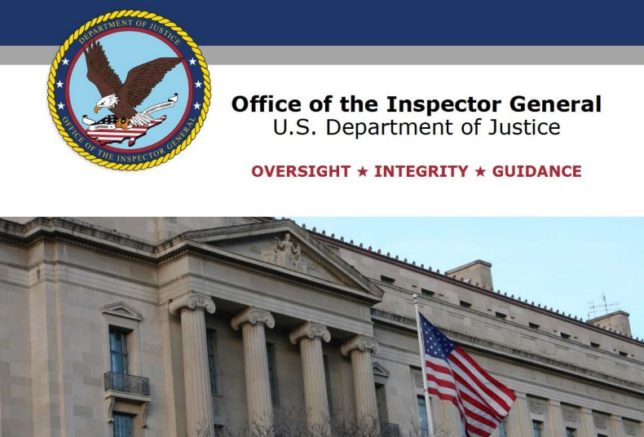 A major objective of the FBI’s Crossfire Hurricane investigation and the subsequent probe by Special Counsel Robert Mueller was to find out “whether individual(s) associated with the Trump campaign are witting of and/or coordinating activities with the Government of Russia.”

The answer was a definitive “no.” Four years and tens of millions of taxpayer dollars failed to uncover even a single person who collaborated with the Russian government while working on the 2016 Trump presidential campaign. What the U.S. Department of Justice (DOJ) Office of the Inspector General has discovered are “serious performance failures” by federal law enforcement in the conduct of the investigation.

A new and comprehensive profile at InfluenceWatch lays out the gory history of the Trump-Russia Collusion Claims (“Russiagate”) and why the world’s only superpower credulously fell for them.

A sample of the information available in the profile is today’s ranking of the five most outrageous ironies during the hoax.

GOLD: Carter Page helped the CIA get information about the Russians.

The CIA repeatedly told the FBI that Trump aide Carter Page was a friendly source who had been giving the agency information about the Russian government and intelligence officials. The bureau repeatedly ignored this and made Page the only known Trump campaign official targeted for eavesdropping under the Foreign Intelligence Surveillance Act. (With only slight exaggeration, President Donald Trump often asserts this was “spying” on his campaign.) The FBI also failed to inform FISA court judges that Page was trying to be one of the good guys, an oversight that earned the FBI multiple harsh reprimands in the inspector general’s report.

And the top Barney Fife Bumbling Cop award of all goes to FBI lawyer Kevin Clinesmith, who turned a CIA memo stating Page was an agency source into a memo that stated he was not a source—behavior that has led to his subsequent indictment and guilty plea.

Despite a year of this unjustified snooping with ill-gotten warrants, nothing untoward was discovered about Page. Imagine your local police pulling over an Amish buggy for speeding, and you would have a rough idea of what went on.

Hillary Clinton has repeatedly claimed that President Trump has been compromised by or is colluding with the Russian government. In October 2019, she even expanded her conspiracy theory to include allegations that U.S. Rep. Tulsi Gabbard (D-HI) and 2016 Green Party nominee Jill Stein were also doing the Russians’ bidding.

But only one 2016 presidential campaign is known to have paid Russians to provide compromising information about another candidate. Perkins Coie, a political law firm working on behalf of the Hillary Clinton campaign and the Democratic National Committee forked over $1 million to an opposition research firm for incriminating information about Republican nominee Donald Trump. That firm, Fusion GPS, paid $168,000 of this to Christopher Steele, author of the Steele dossier, a now-discredited collection of memos alleging Trump was compromised by the Russians.

Looking critically at this in July 2019, Jonathan Turley, a law professor at George Washington University, wrote:

A shared Pulitzer Prize was awarded to the Washington Post and New York Times in 2017 for:

deeply sourced, relentlessly reported coverage in the public interest that dramatically furthered the nation’s understanding of Russian interference in the 2016 presidential election and its connections to the Trump campaign, the President-elect’s transition team and his eventual administration.

In a January 2019 commentary for the Intercept, a left-of-center news website he co-founded, journalist Glenn Greenwald provided his list of “The 10 Worst, Most Embarrassing U.S. Media Failures on the Trump-Russia Story.” The apparently award-hungry Washington Post snagged two of Greenwald’s 10 spots, and the New York Times received one “dishonorable mention.” If the Pulitzer committee honestly cared for enhancing “the nation’s understanding of Russian interference,” it would rescind the award given to the two credulous newspapers and hand it over to the staff of DOJ Inspector General Michael Horowitz.

CIA Director John Brennan revealed in September 2016 that as a college student in 1976 he had voted for Communist Party USA (CPUSA) presidential candidate Gus Hall. The New York magazine story of the incident was titled “CIA Director Reveals He Was Once a Communist Sympathizer.” Archives revealed after the fall of communism in the Soviet Union showed that the CPUSA received $40 million from the Soviets during the last two decades of communist rule.

Brennan’s revelation coincidentally occurred shortly after his summer 2016 briefing of Senate Minority Leader Harry Reid (D-NV), in which the CIA director raised the alarm with Reid about suspicions that Trump campaign officials might be colluding with the Russian government. After the election and after he was no longer the CIA director, Brennan became a featured guest on cable TV news, sometimes accusing President Trump of treason.

According to Brennan’s account, he confessed his CPUSA vote way back in 1980 when he took a CIA lie detector test and was asked if he had ever supported an organization seeking to bring down the U.S. government. Apparently, the agency accepted that the vote for a communist White House four years earlier as nothing more than a youthful indiscretion, gave Brennan his security clearance, and set him on a path that would lead to the top job at the CIA.

5th Place: John Podesta was once the “point man” for NSA data and security policy.

According to Politico, when Bill and Hillary Clinton loyalist John Podesta joined the Obama administration in early 2014, the president made him “the point man on data and privacy as part of the NSA [National Security Agency] reforms.” Two years later, as chairman of the 2016 Hillary Clinton presidential campaign, the man once tapped to oversee data and privacy for the nation’s most technologically sophisticated spooks clicked on an unsolicited email sent by hackers trying to steal his private messages. Soon thereafter, an embarrassing trove of emails from the accounts of Podesta and the Democratic National Committee were in the possession of Wikileaks and publicly released.