Reaction to “The Daily Show” Segment from the New York Times

Today I received the following email via Facebook from Dan Mitchell, a New York Times reporter. It was a reaction to my appearance last night on the satirical news show, “The Daily Show with Jon Stewart.” On the show I talked about community organizing, ACORN, electoral fraud and related matters.

I notice that you have a picture of you and Oliver there. This seems to be fairly common among people who have humiliated themselves before millions of people on shows like the Daily Show — they pretend they were in on the whole thing and it’s all just a big laugh. But it doesn’t change the fact that the vast majority of people who know you will *always* know you as a giant asshole. And this will never change. This video will be online forever, haunting you, and superceding everything you have ever done or ever will do. And rightfully so. You deserve it.

The photo he is referring to is a profile photo I posted in Facebook that was taken of me with reporter/comedian John Oliver after the taping a few weeks ago.

Here is a screen grab of the email: 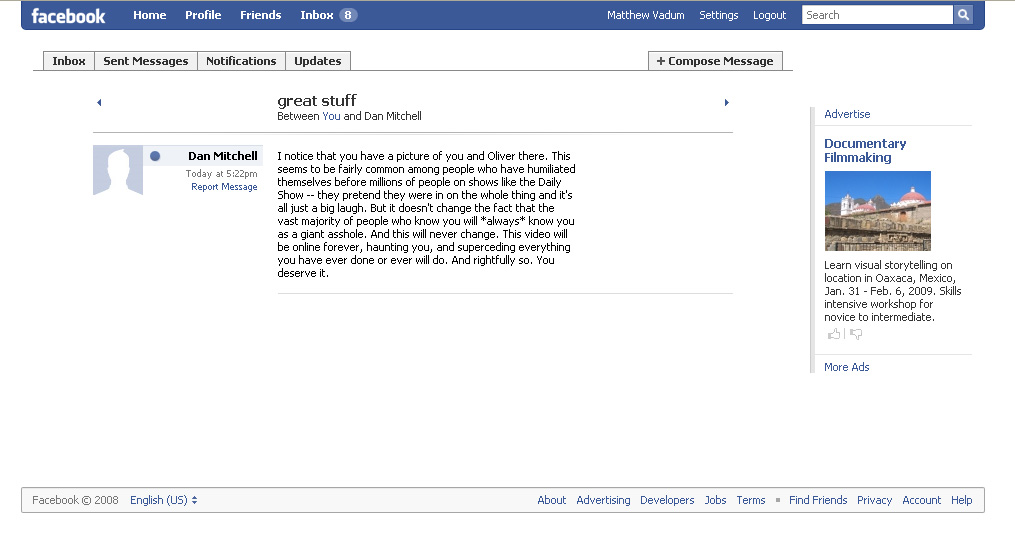 How do I know Dan Mitchell is a reporter for the New York Times? Because when I attempted to block Mr. Mitchell from communicating with me, this helpful information box popped up (another screen grab):

Isn’t it interesting how the New York Times has been using Facebook to attack conservatives? Just two weeks ago it was revealed that New York Times reporter Jodi Kantor went snooping around on Facebook and sent an email to the youngest daughter of Senator John McCain, Bridgette, in hopes of scoring an exclusive interview.

And isn’t it interesting that just today a new news story broke about yet another ACORN employee involved with crack cocaine. Talk about a Bill Ayers moment.

We’ve received quite a few negative comments related to my appearance on “The Daily Show,” but the last thing we expected was harassment from a reporter for the nation’s supposed newspaper of record.