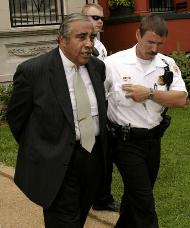 Could Charles Rangel be in trouble with the law again? Here he is after being arrested at a protest at the Sudanese Embassy in 2004.

It’s good to be the king, or a powerful congressman. House Ways and Means Committee chairman Charles Rangel (D-New York) has been living high off the hog, the New York Times reports. While ordinary New Yorkers struggle with sky-high rents, the archliberal Democratic lawmaker, the scourge of landlords, has not one, not two, not three, but FOUR rent-controlled apartments in New York City.

And apparently his behavior is illegal.

An excerpt from the NYT report:

While aggressive evictions are reducing the number of rent-stabilized apartments in New York, Representative Charles B. Rangel is enjoying four of them, including three adjacent units on the 16th floor overlooking Upper Manhattan in a building owned by one of New York’s premier real estate developers.

Mr. Rangel, the powerful Democrat who is chairman of the House Ways and Means Committee, uses his fourth apartment, six floors below, as a campaign office, despite state and city regulations that require rent-stabilized apartments to be used as a primary residence.

Mr. Rangel, who has a net worth of $566,000 to $1.2 million, according to Congressional disclosure records, paid a total rent of $3,894 monthly in 2007 for the four apartments at Lenox Terrace, a 1,700-unit luxury development of six towers, with doormen, that is described in real estate publications as Harlem’s most prestigious address.

The current market-rate rent for similar apartments in Mr. Rangel’s building would total $7,465 to $8,125 a month, according to the Web site of the owner, the Olnick Organization. [emphasis added]