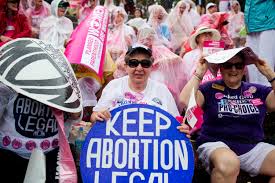 On June 26, 2018, the Supreme Court came to the defense of the First Amendment with their 5-4 decision on National Institute of Family and Life Advocates (NIFLA) v. Becerra protecting pro-life pregnancy crisis centers’ right to not engage in speech that does not reflect their beliefs, namely, a state-scripted speech advocating for abortion. This came much to the disappointment of many liberal organizations. Social media and news outlets erupted in hysterics, with some of the most outspoken pro-abortion non-profits virtue signaling their displeasure including Physicians for Reproductive Health (PRH), Emily’s List, and NARAL Pro-Choice America (NARAL).

Since the news broke, these three non-profits have been rallying their supporters with alarmist claims in press releases and on Twitter. PRH, a 501(c)(3) charitable organization focused on contraception and abortion, put out a statement from their chairman calling the pro-life pregnancy crisis centers “fake women’s health centers” and claiming they are a threat to women’s reproductive rights, using “deceptive or manipulative tactics to prevent someone from learning about abortion or contraception.” Similar unsavory sentiments were shared by the staunchly liberal NARAL, a 501(c)(4) political action and advocacy group focused on expanding access to abortion. Emily’s List, a political action committee intent on putting pro-abortion Democratic women in office, even went so far as to call pro-life advocates “extremists.”

These leftist non-profits are hypocrites. Plain and simple. Here’s why:

PRH claims on its website that it is “advocating for all reproductive health care needs over the course of a lifetime,” as well as “ensuring everyone has access to the best family planning method for them.” That is not entirely true. If PRH was working on behalf of all women’s right to choose where they go for care and guidance, they would support pro-life crisis pregnancy centers which offer other viable alternatives such as adoption resources, birthing classes, doctor referrals, and post-abortion counseling. Pregnancy crisis centers offer women the choice to carry their pregnancy and give that child a chance.

By calling pro-life advocates extremists, Emily’s List is discrediting individuals who believe life is precious and worth protecting. For an organization whose values encompass “champion[ing] diversity” by “listen[ing] and celebrat[ing] the points of view that different cultures and histories bring to our societies, and work towards making every space an inclusive one,” they aren’t very tolerant of the differences in opinion and mission of resource centers that offer pregnant women other options and help.

NARAL says on their website that “everyone should be able to determine if, when, how and with whom to start or grow a family.” That would mean pregnant women should be able to make the decision about whether to seek help and information on available options at a pregnancy center, just as they could at an abortion clinic.

Being pro-women means being supportive of all women and all the diverse ways available to help them, regardless of the beliefs on either side of the issue. These organizations directly undermine the very thing they purport to want for American women. By fighting against pregnancy crisis centers’ right to conduct business according to their beliefs they are denying women the right to choose to carry their pregnancy to term with the help that works best for them.

NIFLA, a non-profit who was the voice of the pregnancy centers targeted in California for their pro-life beliefs, envisions a world where “all life—born and unborn, regardless of infirmities, handicaps, age, or gender—is protected under the law.” Taken literally, that means the protection of life for women today and women that have yet to be born. They do this through offering legal help to pregnancy centers and by providing a legal path to these centers so they may become licensed medical clinics.

SCOTUS correctly held that crisis pregnancy centers should not have to post a notice, give a phone number to abortion clinics or recite a state-mandated script that goes against their own beliefs—beliefs that are probably shared by the women they serve. PRH, Emily’s List, and NARAL may want to look at the hypocrisy of their respective mission statements before they preach on behalf of womankind against free speech, religious freedom, and the right to life. From where I stand, these groups aren’t as pro-women and pro-choice as they seem.