Some alleged conservatives have lined up to back former investment banker Henry Paulson’s proposed $700 billion-plus bank bailout that amounts to nationalization of a huge chunk of the mortgage business. The cure may be worse than the disease. Call it socialism, state capitalism, crony capitalism, or whatever you want, but Congress is now considering cleaning up the mess that it created. It is the largest “affordable housing” program ever imagined and has nothing do with conservatism. This government-managed capitalism is not capitalism at all.

Conservative Lawrence Kudlow, a relentless booster of the stock market day in and day out, not only backs the plan, but perpetuates what can only be called a speculative half-truth, to wit, that the government “will actually make money on the deal”:

According to the Paulson plan, distressed assets will be sold by banks through a reverse auction (the low bid wins) to various investment funds, hedgies, private-equity boys, and other banks. And taxpayers will have a strong ownership position in these asset sales. When the assets are worked out over time — as they will be once housing and the economy recover — taxpayers will actually make money on the deal.

This is a pipe dream. If the federal government makes a profit from the deal, that money will disappear faster than free food at a Capitol Hill reception packed with poor, hungry interns. Whenever the federal government generates surpluses, Congress finds a way to spend the money and expands the size and scope of government. It’s practically the law.

The left’s preeminent walking and talking piggy bank, George Soros, is all for the bailout. Soros has an op-ed in the Financial Times in which he essentially endorses the bailout but complains about how the funds would be allocated:

Now that the crisis has been unleashed a large-scale rescue package is probably indispensable to bring it under control. Rebuilding the depleted balance sheets of the banking system is the right way to go. Not every bank deserves to be saved, but the experts at the Federal Reserve, with proper supervision, can be counted on to make the right judgments.

Surprisingly, David Brooks, the token conservative at the New York Times whose enthusiasm for low taxes and limited government is often in question, doesn’t seem to tip his hand on how he feels about the bailout package. However, he observes that America may be entering a new era of activist government and quotes economist Arnold Kling who calls this approach to governance “Progressive Corporatism.”

There’s another name for corporatism: Fascism.

The late Italian dictator Benito Mussolini would be proud that decades after his former subjects hung his lifeless body upside down on meat hooks at an Esso gasoline station in Milan’s Piazza Loreto that his once-discredited ideas had become so popular in America’s corridors of power. 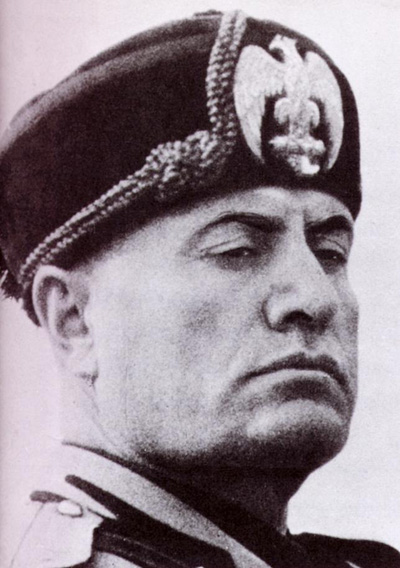 Il Duce: he liked corporatism too.

“Fascism should more appropriately be called corporatism because it is a merger of state and corporate power.” -Benito Mussolini