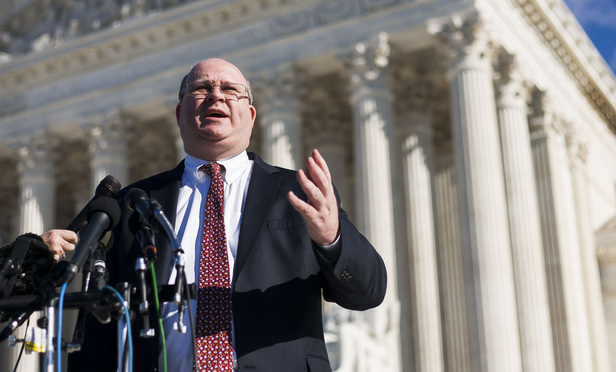 This is the first in a two-part profile about Marc Elias and his work for Perkins Coie.

When Florida Governor (and now-Senator-elect) Rick Scott’s apparent victory over Democratic incumbent Senator Bill Nelson fell within a margin thin enough to warrant an automatic recount, Democrats sent in one of their most useful legal weapons. Marc Elias, Chair of Political Law at the white-shoe law firm, Perkins Coie, flew down to Florida on Nelson’s behalf—and on behalf of his many other Democratic-aligned clients.

Although he was unsuccessful in securing a win for Nelson—it was the attorney’s first such loss—Marc Elias’s legal expertise helped Al Franken secure his Senate seat in 2008. But election law isn’t the only area in which Marc Elias aids Democrats.

In 2016, Marc Elias worked for Hillary Clinton’s presidential campaign as general counsel. In his capacity as an adviser to the DNC, he was perfectly positioned to defend both Hillary and the DNC when POLITICO reporters started asking questions about the Hillary Victory Fund, a joint effort between state Democratic committees, the DNC, and Clinton’s campaign. The fundraising effort was supposed to help Democrats in down-ballot races, but only a fraction of a percent of the money raised made it to the states.

The bulk of the money was passed around to the DNC and the Clinton campaign. Eventually, Americans learned the Clinton campaign controlled all the money and used the funds for its own purposes and to help the financially struggling DNC stay afloat. The agreement that established this unusual arrangement was signed by the DNC’s former CEO Amy Dacey and Clinton campaign Manager Robby Mook. Counsel to both parties, Marc Elias, was copied on the August 2015 agreement.

This drew the ire of campaign finance watchdogs and Clinton’s primary rival, Senator Bernie Sanders, whose campaign complained about the cozy relationship. The DNC, state parties, and the Clinton campaign were able to raise a prodigious sum—over $82 million. (This was largely due to a recent Supreme Court decision in the case of McCutcheon v. FEC, which rescinded the “biennial aggregate limit” on contributions to PACs, party committees, and federal candidates. As Marc Elias noted in an article for the Harvard Law Review Forum, McCutcheon likely helps political parties regain power in a post-Citizens United world. It certainly helped strengthen Hillary’s control over the DNC.)

According to emails made public through WikiLeaks, when Sanders complained, Marc Elias advised the DNC to “push back DIRECTLY at Sanders and say that what he is saying is false and harmful to the Democratic party [sic].”

Clinton secured the nomination, in no small part because her campaign controlled the DNC almost a year before the 2016 Democratic National Convention. Although candidate Trump had a similar fundraising arrangement with the Republican National Committee, it’s important to note the agreement came after Donald Trump mathematically clinched the presidential nomination.

Before President Trump’s inauguration, BuzzFeed News published the full contents of the notorious “Dirty Dossier.” It took nearly a year for the public to learn the opposition research came from FusionGPS—a firm retained by Marc Elias on behalf of both the DNC and the Clinton campaign.

Even as more and more candidates and liberal organizations make known their opposition to the Supreme Court’s 2010 decision in Citizens United v. FEC, Marc Elias has been on the cutting edge of finding new ways for Democrats to increase their campaign contributions. In fact, not long after the U.S. Supreme Court handed down its decision, he made inquiries with the Federal Election Commission which led to the creation of Super PACs. (These independent expenditure-only committees can accept unlimited sums of money so long as they do not coordinate their activities with political candidates.)

In 2014, Marc Elias advised then-Senate Majority Leader Harry Reid on a campaign finance proposal, which was included in a trillion-dollar funding bill. The bill was compromise legislation passed by a Republican House and Democratic Senate to fund the government late in 2014.

The policy rider backed by Marc Elias increased the limit donors can give to national party committees from $97,400 to $777,600. Many liberals—including President Obama and California Representative Nancy Pelosi—saw the rider as an expansion of the power mega-donors hold in the American political process.

Since Marc Elias and his firm represent a host of the Democratic Party’s committees, he and Perkins Coie stood to directly profit from the increased limit on committee donations. In the 2018 election cycle alone, the DCCC paid Perkins Coie over $1.7 million; the DSCC added over half a million. With an increased contribution limit, Democrats have a larger pool of money from which to pay his legal fees.

So much for Democrats being the party of the 99 percent.

In addition to being a recount guru, Marc Elias has led the charge in a number of lawsuits regarding voter ID laws and early voting in a number of red states. In a number of cases, Marc Elias and Perkins Coie convinced judges that measures intended to strengthen voting integrity actually created disparate impact on minority voters.

While many of his suits are in concert with civil liberties bulldogs like the American Civil Liberties Union and the NAACP Legal Defense and Educational Fund, Marc Elias’s partisanship on voting rights is particularly remarkable. When it comes to strengthening the Voting Rights Act—something that would realistically require bipartisan support—he glibly told the Washington Post in 2016:

The way to reauthorize the Voting Rights Act is to make Nancy Pelosi the speaker of the House and Chuck Schumer the [Senate] majority leader and put Hillary Clinton in the White House.

This overt partisanship has worried these nonprofit groups, who fear their civil rights work could be painted with a political brush. They are right to be concerned. States of political interest to Hillary Clinton’s failed campaign received special attention from Marc Elias, who filed a number of suits independently from other pro bono civil rights groups.

Remember though, that Perkins Coie isn’t a pro bono defense fund. When the firm filed voter suppression cases independently, the suits were paid for by a trust. But who funded this trust? None other than George Soros.

In 2017, Marc Elias joined the board of one of his clients, Priorities USA (a pro-Clinton super PAC), which announced its entry into the arena of election law. At this time, Priorities absorbed another organization, which engaged him to litigate in Ohio, North Carolina, Wisconsin, and Virginia—all fights that ended with favorable outcomes for Democrats.

In Virginia, Marc Elias took the fight up to the Supreme Court in the case of Bethune Hill v. Virginia State Board of Elections, which caused Virginia to throw out its electoral map because the court ruled that twelve districts were gerrymandered based on race.

In the second half of this profile, learn how Marc Elias helped the Democrats fund the National Democratic Redistricting Committee.