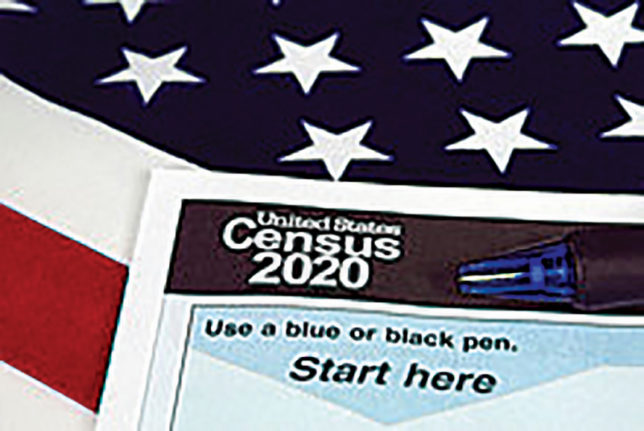 Census data about how the American population has changed over the past decade are collected by the U.S. Census Bureau through mail-in forms, online surveys, and in-person interviews. Besides determining how the 435 seats in the U.S. House of Representatives are apportioned among the states, that data also heavily influences how some $675 billion in federal funding is spent. Credit: PublicDomainPictures. License: https://bit.ly/3b3DjFf
by Hayden Ludwig

One such group trying to tilt the census is Census Counts, which virtuously describes itself as a “collaborative campaign” of 60 organizations “working together to make sure that the 2020 Census is fair and accurate.” But fairness is not its goal; the group is a front for the decidedly left-wing Leadership Conference on Civil and Human Rights. The Leadership Conference has been pushing a social justice agenda for 70 years and was a key litigator in the lawsuit demanding that the Trump administration remove the citizenship question from the 2020 Census.

Census Counts publishes a state-by-state list of local affiliates, all of which coordinate with the national headquarters on their census strategy. NC Counts Coalition, its North Carolina affiliate, offers paid training to become enumerators—official census data collectors—who “can go out into their communities and inform others about the importance of completing the census.”

NC Counts Coalition is clear on its census target demographics:

The group even published an 11-page pamphlet entitled “The Statewide Implications of Undercounting Latino Children.”

Then there’s Blueprint NC, part of State Voices, one of the most influential groups coordinating the Left’s redistricting strategy nationwide. State Voices was formed after the Democrats’ defeat in the 2004 election, with the goal of crafting permanent left-wing infrastructure in battleground states. Consequently, it’s one of the Democracy Alliance’s “recommended organizations,” meaning the elite funders’ collective considers State Voices a key group for all its 2020 efforts—and its funding proves it. Since its creation, State Voices has received $43 million in grants from the George Soros’ Open Society, Ford, and Tides Foundations—to name a few.

State Voices isn’t shy about its objectives: “The two pillars of our civic representation work are the 2020 Census and fair redistricting in 2021.” The officially “nonpartisan” group plays up traditionally Democratic-leaning constituencies in GOTC activities ahead of the 2020 Census. Between 2016 and 2017 State Voices paid out almost $6 million in grants to its affiliated voter/census turnout groups in battleground states (e.g., Blueprint NC, Minnesota Voice, and Pennsylvania Voice) and constituencies, particularly Latinos (through Mi Familia Vota). Those groups in turn trickle part of their funding down to their own network of in-state activists and the use the rest to push likely Democratic voters to support redistricting and the census.

Blueprint NC is a convening hub for a sprawling list of local “partners” sharing the same 2020 strategy. Notables include the Fair Elections Center, Democracy NC, LEAD NC, and Progress North Carolina. Far from being independent grassroots groups, these well-funded organizations are working in tandem to help Democrats win big in 2020.

According to Mapping the Left (a website run by the conservative Civitas Institute), Blueprint NC was founded by a who’s who of North Carolina leftists, including representatives from the state’s Planned Parenthood affiliate, Democracy NC, NC Justice Center, and the local League of Conservation Voters branch. A glance at Blueprint NC’s website reveals how far left its current leadership is. Its executive director is Serena Sebring, a community organizer and self-described “queer Black feminist, mother, organizer, and educator.” The group’s board of directors includes representatives from nine left-wing state activist groups, including the Southern Coalition for Racial Justice, the NC Public Service Workers Union, and Action NC.

The group’s top donors are two North Carolina grantmakers, the Mary Reynolds Babcock Foundation and Z. Smith Reynolds Foundation, which founded Blueprint NC in 2006. Blueprint NC has also received hundreds of thousands of dollars from George Soros’s Foundation to Promote Open Society. One Soros grant for $225,000 in 2016 leaves little to the imagination: “To build and strengthen collaboration and civic engagement capacity in North Carolina.” The phrase “civic engagement capacity” is a euphemism for get out the vote.

Blueprint NC is cagey about its census and GOTV operations in 2020, and it isn’t hard to see why. In 2015, the group made an embarrassing blunder when a strategy memo leaked detailing the group’s cynical game plan to “Eviscerate, Mitigate, Litigate, Cogitate, and Agitate.” Excerpts from the Charlotte Observer include:

“Eviscerate the leadership and weaken their ability to govern.”

“Pressure McCrory at every public event.”

“Slam him when he contradicts his promises.”

“Private investigators and investigative reporting, especially in the executive branch.”

But Blueprint NC almost had the last laugh. In 2018, the group accused Republicans of suppressing the votes of minorities in that year’s midterm election, co-hosting an election fraud meeting in Bladensboro with the NAACP and allied groups to accuse Republicans of “stealing our votes.” That culminated in seven indictments of Republican political operatives charged with ballot harvesting—taking voters’ absentee ballots and failing to mail them—to help the campaign of Rep. Mark Harris (NC-09), who won reelection by a scant 905 votes against Democrat Dan McCready.

Harris declined to run again in the special election ordered by the North Carolina State Board of Elections amid the fallout from the scandal, citing medical issues. However, it didn’t seem to damage the GOP credibility in the district because Republican Dan Bishop beat McCready in the special election in September by roughly 3,800 votes.

Supporting Blueprint’s effort is Democracy North Carolina, a litigation group often portrayed by the media as a neutral actor but which is little more than an extension of the network funded by the Reynolds family foundations. It was formed in 1991 as Democracy South, an extension of the Institute for Southern Studies, which is a leftist agitation group co-founded by Julian Bond, who also co-founded the Southern Poverty Law Center.

Democracy NC’s primary goal is breaking down voter integrity laws. It adamantly opposed the voter ID law added to the North Carolina constitution by ballot measure in the 2018 election after it passed with 55 percent of the vote. The NAACP launched a lawsuit to overturn the new requirement, and the state Supreme Court ultimately struck down the voter ID law as unconstitutional in December 2019. As a consequence, no photo ID was needed to vote in North Carolina’s primary in March 2020 and won’t be required in the November general election.

R.J. Reynolds was a Winston-Salem entrepreneur who built the second-largest tobacco company in the country. The public-spirited generosity of Reynolds and his children is one of the great stories of American philanthropy.

Sadly, much of the vast Reynolds family fortune later came under the control of leftists, who soon abandoned Reynolds’ donor intent as well as his belief in free markets—turning the Reynolds foundations into the biggest funders of left-wing, anti-capitalist groups in North Carolina. These include the Z. Smith Reynolds, Mary Babcock Reynolds, and Arca Foundations, first created nearly a century ago to fund hospitals and schools but which have since been warped into clearinghouses for radical “social justice” causes.

Today the Reynolds family foundations are top donors to dozens of groups such as the Center for Community Change, the Southeast Immigrant Rights Network, and the North Carolina League of Conservation Voters. One Reynolds heiress, Jane Lehman, even co-founded the Tides Foundation with Drummond Pike in 1976, now one of the largest incubators of new activist groups in the country.

In the next installment of “Plans to Flip North Carolina,” assess the effects of a Supreme Court ruling on North Carolina redistricting.