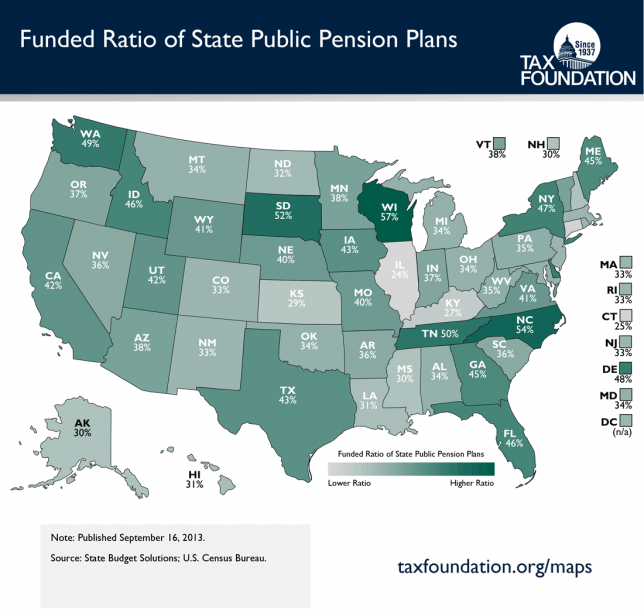 A new report by the Hoover Institution entitled “Hidden Debt, Hidden Deficits” finds that the majority of governments in the United States massively underreport the unfunded liabilities in their employee pension systems.

The Hoover report arrives at this figure by calculating the total “market value” of these liabilities—interest owed plus costs for servicing pension plans—which few government disclosures do. This has the result of hiding the substantial cost of employee pension plans from the general public—at least until payments to retirees are due.

The California state government, for example, identifies unfunded liabilities totaling $242,746,943. But according to Hoover’s calculations, the real figure owed by the Golden State is $769,407,011—or nearly 217 percent more than is officially reported. That’s a conservative figure, too; a Stanford University study estimates a nearly $1 trillion overall funding gap in California, or $76,884 per household.

Illinois, the state with the second-highest pension obligation, reports $188,066,253 in unfunded liabilities; the real figure is closer to $360,521,175. That’s 95 percent higher than is officially reported. While Illinois currently contributes 11.1 percent of its annual budget to servicing pension obligations, Hoover estimates the state must raise spending to 23.4 percent of its budget simply to prevent a rise in overall pension liabilities.

Much of the country’s looming pension payment crisis stems from sweetheart deals brokered by public sector unions and politicians. Unlike private sector unions, whose fortunes rise and fall with market prices and corporate revenues, public sector unions do not engage in adversarial collective bargaining – a fact AFL-CIO founding president George Meany was keenly aware of when he said that it “is impossible to bargain collectively with the government.” Since governments do not rely on revenues from the market, and are not beholden to a board of directors, public sector unions find little opposition when they demand pay increases for their members.

It’s a positive-feedback loop that has racked up trillions in pension liabilities – all paid for by American taxpayers.