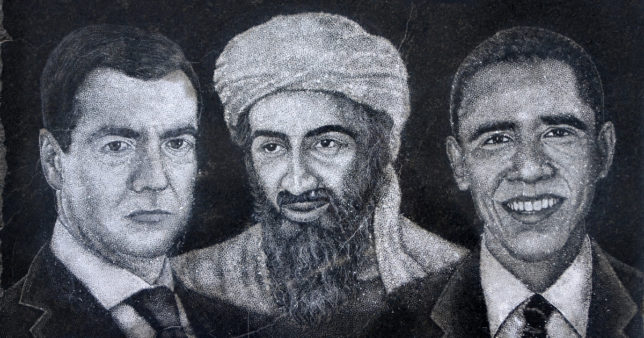 Climate change isn’t just a fixation for liberals in the U.S. It’s also a basis for anti-American extremism abroad.

The idea is that Western countries—the U.S. especially—have become wealthy by unfairly exploiting poor countries, which has changed the climate change to the detriment of these undeveloped regions. That’s why Warmism (aka, “climate change” ideology) is part of the school curriculum in countries like Kenya, South Africa, and Vietnam.

The same ideology is also a major part of radical Islamism. Osama bin Laden—killed by U.S. Special Forces in 2011—left behind a letter “to the American people” calling for “a great revolution for freedom.” According to bin Laden, it’s imperative “to free Barack Husayn [Obama] so he can implement the change you seek. It does not only include improvement of your economic situation and ensure your security, but more importantly, helps him in making a rational decision to save humanity from the harmful gases that threaten its destiny.” In 2010, he wrote a similar letter claiming that “talk of climate change isn’t extravagant speculation; it is a tangible fact.” Bin Laden has even referred to climate change as a judgement from Allah, an ideology underpinning his assault on the countries that supposedly perpetuate it—the U.S. in particular.

Apparently, that message isn’t falling on deaf ears. A core pillar of Warmism is that developed countries like the United States should pay poor countries reparations for exploiting them. That’s another idea that bin Laden liked, and the Green Climate Fund is projected to collect $100 billion a year in taxpayer money from the developed world by 2020. That money will “help wean the worldwide victims” of climate change, distributing the West’s wealth to poor countries—on the taxpayer’s dime.

If only the U.S. had the same commitment to fighting ISIS and murderous terrorists like bin Laden—who continue to plague the Middle East.

For more, you can read the April edition of “Green Watch” here.

This blog post was adapted from the April edition of Capital Research Center’s “Green Watch,” by Steven J. Allen.