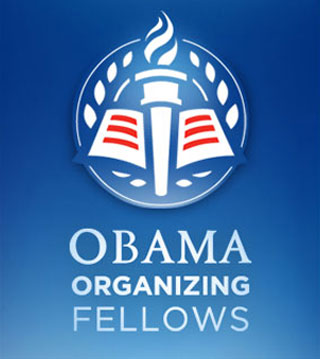 In exchange for working on the presumptive Democratic presidential candidate’s campaign, fellows are promised training in community organizing techniques, which is a euphemism for leftist political agitation. (Perhaps fellows will be instructed in the fine art of fraudulent voter registration ACORN-style.) As this month’s Foundation Watch report on Obama’s radical roots notes:

Agitation is what Chicago-born Saul Alinsky (1909-1972), the father of community organizing, called “rubbing raw the sores of discontent.” In his classic book Rules for Radicals, Alinsky prescribed the tactics and defined the goals of community organizing. Among his “rules”: “Keep the pressure on. Never let up” and “Pick the target, freeze it, personalize it, and polarize it.”

Applications are now closed, according to the campaign, which claimed more than 10,000 people applied for the temporary gigs.

On the Obama campaign page devoted to the fellowships, Obama himself appears on a brief video saying the program will “train a new generation of leaders that will not only help us win this election but help us revive democracy in communities all across the country.”

Hold on a moment there. America may have its faults, but does Obama really believe it doesn’t have enough democracy already?

The answer is both yes and no, because left-wing extremists like Obama don’t use the word democracy the way other Americans do.

To radical leftists, democracy is a coded word for socialism. In other words, if they don’t end up with the political result they want, it’s not really democracy.

Obama’s ideological soulmates are people like Amy Goodman of “Democracy Now!” and Princeton professor Cornel West, an advisor on his campaign team.

West wrote a book with the word democracy in the title, but it’s not really about democracy. The book, Democracy Matters: Winning the Fight Against Imperialism, is about how the U.S. is supposedly under the control of racist, patriarchal, authoritarian fundamentalists who are intent on spreading empire no matter the cost.

West hails democracy as a concept but at the same time calls himself a “progressive socialist,” and has written that “Marxist thought is an indispensable tradition for freedom fighters.”

West is so committed to his through-the-looking-glass version of democracy that he supports Venezuelan strongman Hugo Chavez, who wants to overthrow the elected government of neighboring Colombia, a real-life democracy.

When West visited Venezuela in 2006, he praised the government of leftist Chavez which has nationalized industries, jailed and murdered its opponents, and threatened the United States: “We in the United States have so many lies about President Hugo Chavez and the Bolivarian Revolution.” West said he visited Chavez’s Venezuela “to see the democratic awakening taking place.” By “democratic awakening,” West meant the transformation of Venezuela into a socialist state.

Another example of this odd lip service to democracy by those who don’t actually support it can be found among countries. During the Cold War era, the official name of the Soviet Communist puppet state of East Germany was the German Democratic Republic. Even today Stalinist North Korea insists it is a true democracy. That tyrannical state calls itself the Democratic People’s Republic of Korea.

Real democracies tend not to be insecure about the fact that they’re democratic.

Similarly, the radical American activists who scream loudest about democracy in this nation that is awash in democracy tend not to give a tinker’s cuss about it.