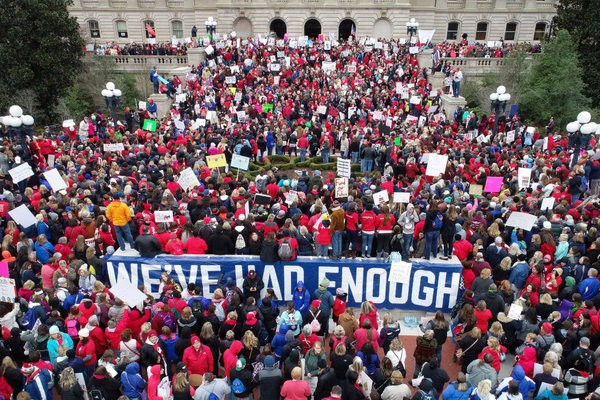 On June 27, the Supreme Court ruled in favor of Mark Janus, an Illinois government worker who dissented from union representation and paying union fees, in the case of Janus v. American Federation of State, County and Municipal Employees. The court held that mandatory “agency fees” charged by unions for collective bargaining on behalf of nonmembers forced to accept representation by the union by law violate the First Amendment protections of free speech and association.

Collective bargaining—when done on behalf of government employees—is an inherently political activity since the union is advocating for certain standards and benefits for a group of people from a government agency. It makes sense that some employees would strongly disagree with some aspects of the union’s mission. Workers who have decided to opt out of union membership based on opposing political beliefs or because they don’t believe they need what the union is offering will be able to keep more of their hard-earned money—rather than pay into a system from which they do not receive clear benefits or support.

The Janus decision benefits the independent worker and supports our economy because it gives government workers more autonomy over their professional lives. Those employees can now negotiate the income and work environment that works for their personal needs, and they can choose how to spend more of their income. According to a report from the Albany-based think tank, the Empire Center, non-union public workers could save roughly $53 million a year in agency fees, and members who opt out of their union could save upwards of $110 million as a result of Janus. This is great news for the American workforce, right?

Wrong… at least according to union leaders and labor union-supported liberals.

As Justice Elena Kagan wrote in her dissent in Janus, “Public employee unions will lose a secure source of financial support.” This loss of revenue will in turn severely affect unions’ ability to engage in politics. (Never mind that past precedent allowing agency fees—in both the private and public sectors of employment—is based on the pretext that such payments not be used for political and public policy purposes.) How will they be able to influence elections and line their pockets without the money they’re forcing out of the pockets of individuals who have no choice but to pay?

In response, creative liberal politicians are now looking for ways to keep the unions afloat. One New York state assemblyman, Richard Gottfried (D-Manhattan), is drafting legislation to work around the Janus decision. (Over the course of his tenure in the N.Y. state legislature, Gottfried has received endorsements from some of the nation’s most prominent pro-union groups and unions, among them the AFL-CIO labor union federation, Citizen Action of New York, a community organizing outfit; the “union that rules New York,” Service Employees International Union 1199; and New York City’s public schoolteachers’ union, the United Federation of Teachers, an organization affiliated with the American Federation of Teachers.)

Gottfried’s plan, according to one source, would use taxpayer money that has been set aside for members’ raises and essentially give it directly to the union by folding the unions’ collective bargaining costs into their contracts with the government. It would then turn into a trickle-down system where the union gets paid first with taxpayer money to cover their collective bargaining, and the employees receive a reduced raise after the union gets its cut.

One professor from the Davis School of Law at the University of California said that this plan would not be another attack on the First Amendment. It would instead “say that New York believes that public sector bargaining is important. The government can’t force individuals to fund it…but the government thinks it’s important enough to fund itself.”

There’s one issue with that statement.

The government doesn’t just have its own money to throw around. Actually, it gets its money from the people—individuals who work hard to earn that money. It gets that money through taxation, which, in and of itself, is a forced payment to the government from an individual—including non-union member public sector workers who would rather see their money go toward something they support and not into the coffers of a union that use money to “collectively bargain” for its own interests.

Gottfried’s proposal is a naked political power grab and an end-run around the First Amendment freedoms protected by the Supreme Court of the United States’ decision on Janus. If this legislation ever comes to fruition, the only winners will be union bosses and the politicians they patronize.