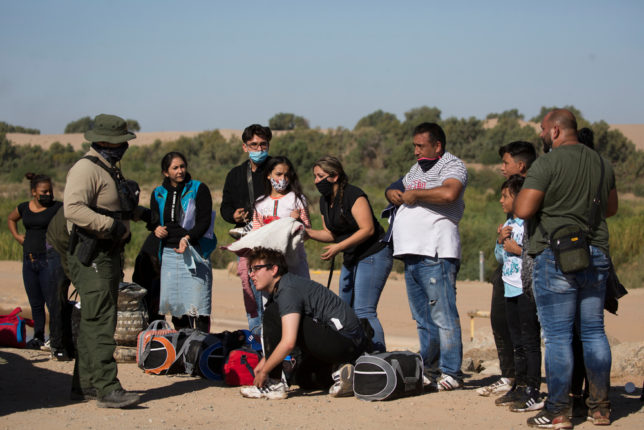 The American people can’t be blamed for confusion over Joe Biden’s official policy on illegal immigration, but a cursory look at federal funding flowing into immigration-related nonprofits might clear things up for them.

Since the start of the Biden term, the White House has been all over the place on immigration, one minute signaling an open border, the next treating the growing crisis like an invasion. The cognitive dissonance of expanding Title 42 to include Venezuelan dissidents and, almost simultaneously, bragging of convincing the mayor of El Paso to hold off declaring a state of emergency has been stunning to watch. And while these policy contradictions play out before the midterms, fentanyl is pouring across the border and Mexican cartels are becoming unimaginably wealthy.

So where does the Biden White House actually stand? The answer is in the money. And the nonprofits who receive it.

In July, a little-known nonprofit called the Acacia Center for Justice with ties to the left-leaning Vera Institute of Justice received “$41 million in taxpayer-backed government contracts” to “to help illegal immigrants fight deportation amid the escalating border crisis,” Fox News reported:

“’The objective of the Acacia Center for Justice (“Acacia”) is to expand on Vera’s work over the past twenty years in providing legal support and representation to immigrants facing deportation through the development, coordination and management of national networks of legal services providers serving immigrants across the country,’ the group’s website states.

Using taxpayer funds to help people entering the country illegally avoid deportation has conservative policy makers and pundits starting to ask questions, especially since it seems to have ramped up lately. The legacy media doesn’t report much on the crisis of illegal immigration at the southern border, but they’ve been doing a lot of reporting on the lack of funds to nonprofits that help border crossers.

Just before stopgap spending was approved at the end of September, Roll Call reported “[b]oth the White House and Senate Democratic leadership hope[d] to include language in an upcoming stopgap funding measure to boost assistance for local nonprofits that help asylum-seekers.”

Shortly thereafter, The Catholic Legal Immigration Network, Inc. (CLINIC) began announcing the receipt of grants from the U.S. Citizenship and Immigration Services to their affiliates – including left-of-center Catholic Charities – to help “expand [the network’s] range of services for our low-income immigrant clients on their path to citizenship”.

While helping illegal immigrants fight deportation and walk a path toward citizenship sounds like a noble goal, there’s an inherent “inequity” in the system:

[T]he notion of using government money to represent undocumented residents strikes some as unfair. U.S. citizens who are parties in other civil proceedings aren’t provided a lawyer, so why should someone who is in the country illegally, asks Lora Ries, senior research fellow for homeland security at the Heritage Foundation.

Former New York Lieutenant Governor and columnist Betsy McCaughey, writing in July of this year, sees something altogether more sinister in the funding of nonprofits to carry out the work of assimilating border crossers: money laundering in the pursuit of facilitating illegal immigration:

Democratic politicians want to maximize illegal immigration, but they don’t want their fingerprints on it. The remedy: pay so-called charities that will do the work for them. Who’s in on this scam? President Joe Biden, and politicians across the country including Gov. Kathy Hochul, DC Mayor Muriel Bowser and our own Mayor Eric Adams.

Even before crossing the border, migrants still in Mexico are being handed debit cards loaded with $800 a month to enable them to pay for necessities. The gift cards are distributed by the non-profit Organization for Migration, thanks to money provided by the US State Department.

Other reporting backs this up. Joshua Philipp of Epoch Times aired a special on Sept. 29th detailing human trafficking at the border and wondered, “[H]ow can charity groups cover such high costs? If law enforcement is passing immigrants to charities, is it through a legal agreement? Who pays for it? Is this a local issue or something bigger?”

All great questions. As usual, the answer lies in where the money goes.

This article first appeared in Townhall on October 19, 2022.