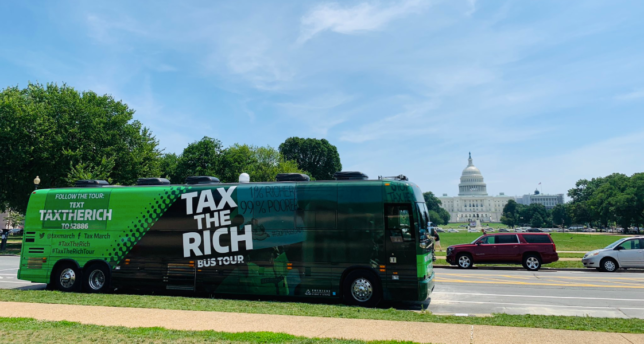 The Tax the Rich bus in Washington, DC, with the Capitol in the background. In 2017, Tax March launched its Tax the Rich Bus Tour. Credit: Tax March.
by Hayden Ludwig

Who are they kidding?

Tax March, which calls itself “a grassroots effort to demand accountability and tax fairness,” launched a $2 million advocacy campaign last month demanding Republicans support the Biden agenda, accusing them of shielding the wealthy and big companies at the expense of the poor and middle class.

If “accountability and tax fairness” are what it’s after, let’s start with Tax March itself, which neatly hides the fact that it’s a front for a major dark money group based in Washington, D.C. One has to hunt for a difficult-to-find “disclosure ” page to find that important detail. Yet these “grassroots” activists will happily accept donations from unwitting supporters who might care to know that they’re funding an ultrawealthy activist group that pulled in $138 million in 2019, all of it tax-free.

Sixteen Thirty Fund, in turn, is managed by staffers and officers from Arabella Advisors , a for-profit consultancy catering to the Left’s biggest foundations and donors who pump hundreds of millions of dollars each year through Arabella’s nonprofit organizations to push political causes disguised as “charity.”

Arabella’s network has pulled in more than $3 billion in tax-free revenues since 2006. The largest of these groups, New Venture Fund, paid its president a cool $384,000 in 2019. How many small-business owners can boast the same success?

But this network isn’t a business. It doesn’t build, manufacture, grow, or move anything. Instead, it relies on the heaps of money, generated by long-dead capitalists and left to corrupt foundations, which shield their unearned lucre from taxes behind the fig leaf of “philanthropy” to pay professional failures-to-launch to attack the free market, making oodles of money in the process. Great work, if you can get it!

According to lobbying filings, Sixteen Thirty Fund spent close to $2 million lobbying Congress in the first half this year on bills ranging from D.C. statehood to the $1.9 trillion stimulus package and the Democrats’ extreme For the People Act , which was supposedly meant to curb the “corrosive influence ” of “dark money” on our politics.

I wonder how that escaped the attention of today’s crack journalists in the legacy media?

What’s so rich about this latest attack campaign is that at least three of the “grassroots” organizations backing Tax March are also Arabella front groups run from the same office — Health Care Voter , Protect Our Care , and Health Care for America Now . It’s a classic deception campaign to beef up coalitions so that they look like groups of angry local citizens rather than seasoned professionals collecting another paycheck for picketing outside Congress.

If we’re soaking anyone, let’s put the Arabella empire into consideration.

This article originally appeared in the Washington Examiner on October 25, 2021.