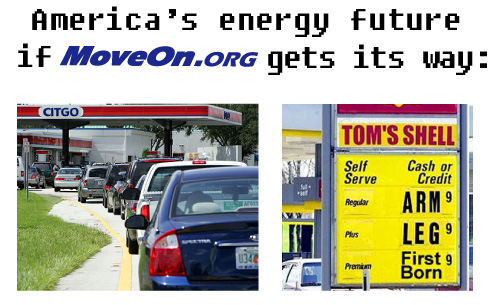 The little boys and girls at the gimmicky liberal group MoveOn.org’s latest political stunt involves protesting Republicans’ support for offshore oil exploration. The group is currently whining about GOP lawmakers’ refusal to leave the House floor after the Democratic majority shut down the chamber Friday out of fear that many Red State Democrats were planning to defect and support expanded drilling on the Outer Continental Shelf.

MoveOn says those lawmakers who support freeing America from dependence on foreign oil are the real pranksters. The group said in a statement that:

“Since Friday, the Republicans in Congress have been playing to the television cameras with theatrical stunts because Speaker Pelosi blocked their offshore drilling plan. The Republican plan will not lower gas prices but it will line the pockets of Big Oil executives, the same people donating millions of dollars to Republicans.”

MoveOn and all the other oil-hating groups such as Environmental Defense, Greenpeace, Natural Resources Defense Council, and the Sierra Club, have no interest whatsoever in reducing gasoline prices. They don’t care about Americans who are suffering because of skyrocketing fuel prices. They consider human beings to be a form of pollution, a “cancer” growing on the planet.

Now they’re demonizing oil, the commodity, which is essential for economic growth. When they demand America free itself from its supposed oil “addiction,” what they’re really demanding is that the nation free itself from capitalism. Oil has become a proxy for capitalism, consumption, and wealth itself.

Interestingly, MoveOn has decided to swarm the Annandale, Virginia, office of Representative Tom Davis (R-Virginia), a prominent moderate who is not seeking reelection in November.

MoveOn reportedly sent out an email to its supporters yesterday urging them to protest at Davis’s office. Here is an excerpt:

“We’ll tell the media and the Republicans that voters aren’t buying their oil industry scams. Together, we’ll deliver hundreds of thousands of signatures from voters who’re demanding real solutions-renewable and clean energy sources. Republicans have been dominating the debate around gas prices for weeks with their sham drilling plan. Oil drilling is a gimmick, and the only reason they’re pushing for it is because their donors in the oil industry want it. Their latest stunt is getting a lot of press coverage. But no one has challenged their ridiculous arguments, so we have to.”

The event is also referenced at MoveOn’s website here.

Ironically, gas is relatively cheap in Annandale. A source on the scene tells me that it’s selling for $3.57 per gallon at the Exxon at Edsall Road and I-395, which is well below the national average of $3.84, according to GasBuddy. (Figure as of August 6)

But how did MoveOn choose Davis as a target?

MoveOn may have political payback in mind. Davis was the lawmaker who last September urged a congressional probe of the New York Times for providing a steep discount to the leftist group for its infamous “General Betray Us” ad. The Senate voted to condemn that unpatriotic ad that questioned the truthfulness of Army General David H. Petraeus, the U.S. commander in Iraq.

Davis sent a letter to House Oversight and Government Reform Committee Chairman Henry Waxman (D-California) demanding a hearing to explore “whether the discount was a deliberate attempt to subsidize MoveOn.org’s message” and “whether the campaign finance laws prohibiting such discounts are effective and enforceable.”

POST SCRIPT: Americans for Prosperity crashed MoveOn’s protest at the U.S. Capitol on August 5. A video of the event is available here. MoveOn supporters made it clear they want gasoline prices to rise even higher.