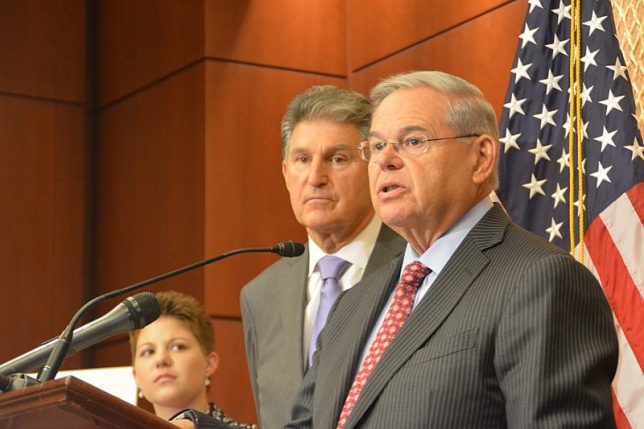 New Jersey Senator Bob Menendez (D), won reelection last week, despite being indicted by the FBI for conspiracy, bribery, and honest services fraud. This successful bid for a third term by a corrupt politician proves why America needs term limits at all levels of government.

Over his 12 years in the Senate, Menendez has earned the reputation of a sleaze. For years, he traded political favors for bribes from a close friend. In exchange for debasing his office, Menendez enjoyed multiple vacations on a private jet, received $40,000 to his legal defense fund, and took in more than $750,000 in campaign contributions from groups supporting him. All Menendez had to do was lobby the U.S. State Department to approve a contract with the Dominican Republic that would benefit his friend’s business and secure visas for three of his friend’s girlfriends. In 2012, Menendez also allegedly paid for underage prostitutes on trips to the Dominican Republic.

Senator Menendez’s connections to Washington D.C.’s elite political circles almost certainly helped protect him. These connections would have been difficult to build if term limits were in place. The FBI indicted Menendez in April of 2015, back when Republican Chris Christie was still governor of New Jersey. Democrats feared if Menendez was convicted while Christie was in office, they would lose a reliable liberal vote and see it replaced with a conservative one. That did not happen because Menendez staved off conviction by negotiating multiple delays in his trial date. By the time the trial started in fall of 2017, Christie, who has a rife history of scandals as well, was out of office—thanks to New Jersey’s two-term limit on governors.

When Phillip Murphy won back the governorship for New Jersey’s Democratic Party, talk of Menendez’s trial resumed. The trial lasted two-and-a-half months and ended inconclusively with a mistrial. The State Department, also embroiled in a series of politically motivated scandals, declined to retry Menendez.

In 2012, Menendez’s friend (now felon) donated $600,000 to Senate Majority PAC. That same year, the PAC spent $582,000 on Menendez’s reelection campaign. Prosecutors used this donation as evidence of  bribery in the case against Menendez’s friend.

All of this influence peddling contributed to Menendez’s successful bid for a third term. If term limits were in place, it wouldn’t have even been an option.

The debate over term limits is not new. In 1789, when asked about term limits during a Virginia legislative session, Founding Father George Mason declared, “nothing is so essential to the preservation of a Republican government as periodic rotation.” Third President of the United States and drafter of the Declaration of Independence Thomas Jefferson also agreed that term limits would keep the government honest.

Those who disagree with term limits usually argue that the ultimate term limit is the will of the people. After all, politicians are accountable to their constituents who have a chance to vote them out of office every few years. But by capturing influence and political favors, incumbents have an inherent advantage. Menendez is just the latest case in point. Even though he should be serving time for corruption, the Democratic establishment backed him up and helped turn New Jersey almost entirely blue.

Here are three main reasons supporters of term limits think the policy should be implemented nationwide. First, power corrupts. James Fenimore Cooper, a famous writer during the early 1800s, warned, “contact with the affairs of state is one of the most corrupting of the influences to which men are exposed.” Limited power will result in limited corruption. Second, term limits will minimize the influence of big money. Lobbyists and campaign donors spend millions of dollars each year to influence elections and politicians. The third reason term limits should be implemented is to incentivize service-oriented leaders and discourage career politicians. The Founding Fathers hated going to Washington D.C. because it took time away from their family and businesses. Today, politicians like Bob Menendez usurp government by clinging to power for decades. Term limits will discourage this career-politicking and return the focus to selfless service.