Meet the People Who Want to Make Washington Traffic Even Worse 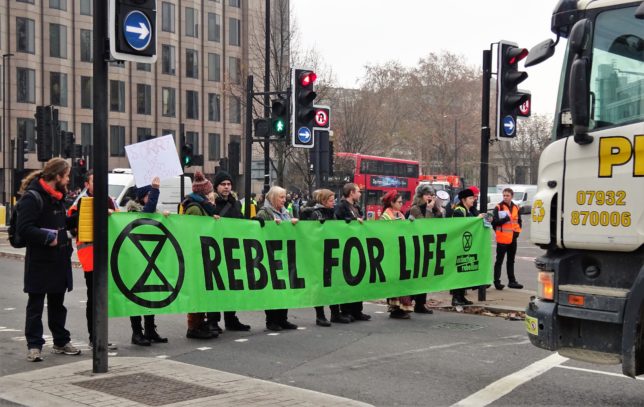 Shut Down DC, a coalition of environmentalist activist groups, has announced plans to significantly disrupt traffic in Washington, D.C. on September 23, 2019 to raise awareness about climate change. The group has stated that it aims to affect the most powerful people in the city by blocking key areas, such as Massachusetts Avenue, the headquarters of Immigration and Customs Enforcement (ICE), and various intersections around the White House, the National Mall, and Capitol Hill. As of September 13, about 250 people had confirmed they would join in the demonstrations.

The coalition is sponsored by All Out D.C., an umbrella group of activists that formed after the inauguration of President Donald Trump. All Out D.C. has hosted rallies involving Antifa members in the past, which led to hundreds of D.C. police officers needing to separate them from right-wing demonstrators to prevent violence. Additional sponsors include Rising Tide North America, Extinction Rebellion Washington DC, and CCAN Action Fund.

Shut Down DC has aligned its demands with the political platform put forward by the environmentalist movement Strike With Us, which includes the Green New Deal, the halting of all fossil fuel extraction and planned fossil fuel infrastructure projects, and legislation for the so-called “Rights of Nature” which would include a ban on the extraction of seemingly all natural resources.

However, Congress will no longer be in session to vote on September 23 due to an unfortunate circumstance that occurred in the private life of a Member of Congress. Whether this sudden turn of events may hamper the effectiveness or success of the Shut Down DC protests remains to be seen.

In addition to Shut Down DC’s protest, there will be two major demonstrations led by the Strike With Us coalition on September 20. The event description claims that 1,000 protestors will be involved in the D.C. strike, while over a million students have been given permission by the New York City public school system to skip school without penalty so that they can attend the Strike With Us rally in Manhattan. This will be a part of a wider protest that same day coordinated by Future Coalition involving over 800 groups across the country, including over 1,000 Amazon employees and websites like Tumblr, Kickstarter, and WordPress who will be “going dark” to show solidarity with the coalition, according to a press release from 350.org. This strike will launch a week of global environmentalist protests from September 20 through September 27, bookending an emergency UN climate summit in New York City to be held on September 23.

To read more about Shut Down DC, the Future Coalition, and Strike With Us refer to our Influence Watch profiles.