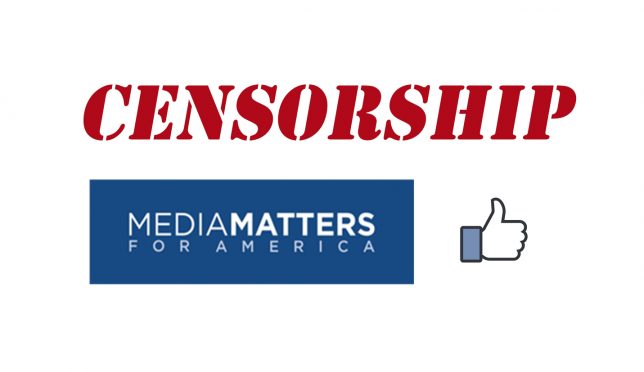 Lachlan Markay at Washington Free Beacon reports that Facebook’s anti-“fake news” efforts are being driven by the George Soros-funded Media Matters for America.

Media Matters told current and prospective donors at a retreat in Florida over the weekend that it has been in discussions with Facebook leadership about their policies on inaccurate and partisan news stories on the website that many liberals blame for political losses last year.

“We’ve been engaging with Facebook leadership behind the scenes to share our expertise and offer input on developing meaningful solutions,” the group said in a briefing book obtained by the Washington Free Beacon at the conference.

Markay posted a PDF copy of the MMfA briefing book online. It may be viewed here.

Conservatives complain that Facebook deliberately de-emphasizes and in some cases censors right-leaning voices, “a theory that could be fueled by the social media network’s ties to Media Matters, among the harshest critics of conservative figures and ideas,” he writes. MMfA has glommed on to the Left’s current obsession with so-called fake news, “a loosely defined category of misinformation that has been invoked to attack everything from Russian propaganda efforts to political blogs deemed factually dubious.”

Brock promised what critics call his “Brocktopus” of pressure groups and big money super PACs would keep Trump out of the White House.

Now he promises to lead the resistance to the new president’s agenda.

That may be difficult because he is already meeting resistance on his own side, reports Asawin Suebsaeng at the Daily Beast.

Many Democratic Party insiders “talk about the man not as a sought-after ally in the fight against Trumpism, but as a nuisance and a hanger-on, overseeing a colossal waste of cash,” Suebsaeng writes. He adds that Brock’s “former employees say that he has hurt the cause.”

(I have profiled Media Matters and Brock exhaustively over the years. Here are two examples: Organization Trends, December 2014; and Townhall, April 2009.)