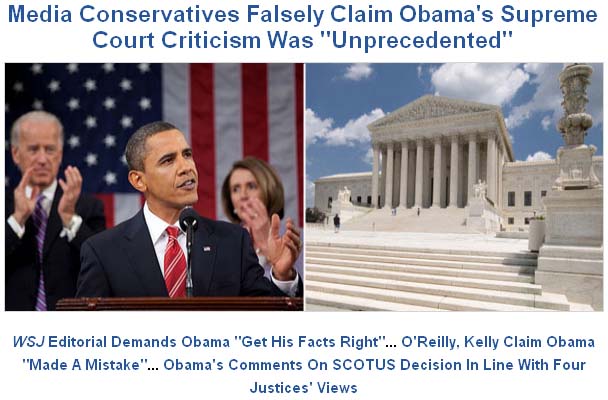 His left-wing character assassination factory, Media Matters for America, has been caught lying once again. Media Matters uses deception and counts on you not making the effort to read the full quotations it truncates.

The new blog post, Media conservatives falsely claim Obama’s Supreme Court criticism was “unprecedented” is a distortion from start to finish. (Things have a habit of disappearing on the Web so here is a PDF copy of the blog post preserved for posterity.)

In it Media Matters fails to demonstrate its hypothesis, which is that critics of President Obama are incorrect when they say Obama’s calling out of the Supreme Court by name and criticism of it during a State of the Union address was unprecedented.

In fact the evidence that Media Matters presents –past State of the Union addresses from previous presidents– only demonstrates the opposite, namely, that Obama’s actions are unprecedented.

Harding criticized the Supreme Court for overturning the Child Labor Law in his 1922 State of the Union. In 1922, the Supreme Court found the Child Labor Law of 1919 to be unconstitutional. In his State of the Union address, President Warren G. Harding criticized the court for putting “this problem outside the proper domain of Federal regulation until the Constitution is so amended as to give the Congress indubitable authority. I recommend the submission of such an amendment.”

Of course the Harding quotation has been selectively edited to suggest he was criticizing the court. Criticism must be in the eye of the beholder because the full quotation doesn’t read like criticism. Here it is:

Closely related to this problem of education is the abolition of child labor. Twice Congress has attempted the correction of the evils incident to child employment. The decision of the Supreme Court has put this problem outside the proper domain of Federal regulation until the Constitution is so amended as to give the Congress indubitable authority. I recommend the submission of such an amendment.

This reads like a mere statement of fact. Harding recognizes the high court has produced a result he didn’t agree with and recommends that the Constitution be amended. (Harding SOTU transcript here)

And let me add here: So many of our greatest statesmen have reminded us that spiritual values alone are essential to our nation’s health and vigor. The Congress opens its proceedings each day, as does the Supreme Court, with an acknowledgment of the Supreme Being. Yet we are denied the right to set aside in our schools a moment each day for those who wish to pray. I believe Congress should pass our school prayer amendment.

And while I’m on this subject, each day your Members observe a 200-year-old tradition meant to signify America is one nation under God. I must ask: If you can begin your day with a member of the clergy standing right here leading you in prayer, then why can’t freedom to acknowledge God be enjoyed again by children in every schoolroom across this land?

During our first 3 years, we have joined bipartisan efforts to restore protection of the law to unborn children. Now, I know this issue is very controversial. But unless and until it can be proven that an unborn child is not a living human being, can we justify assuming without proof that it isn’t? No one has yet offered such proof; indeed, all the evidence is to the contrary. We should rise above bitterness and reproach, and if Americans could come together in a spirit of understanding and helping, then we could find positive solutions to the tragedy of abortion.

Incidentally, on the campaign trail Obama used language similar to Reagan’s to describe abortion: “Those are all things that we put in the Democratic platform for the first time this year, and I think that’s where we can find some common ground, because nobody’s pro-abortion,” Obama said during the third presidential debate. “I think it’s always a tragic situation.”

Activist judges, however, have begun redefining marriage by court order, without regard for the will of the people and their elected representatives. On an issue of such great consequence, the people’s voice must be heard. If judges insist on forcing their arbitrary will upon the people, the only alternative left to the people would be the constitutional process. Our Nation must defend the sanctity of marriage.

The outcome of this debate is important, and so is the way we conduct it. The same moral tradition that defines marriage also teaches that each individual has dignity and value in God’s sight.

Has the Supreme Court addressed the issue of gay marriage? If it did, I missed it.

Again, President Bush doesn’t name the Supreme Court or refer to any particular ruling. He discusses a public policy issue and suggests ways to deal with it. (Bush 2004 SOTU transcript here)

Here’s the bottom line: The George Soros-backed Media Matters is desperate to defend a failing president.

Now it’s grasping at straws in an effort to defend the thuggish, Huey Long-like demagoguery of Barack Obama.