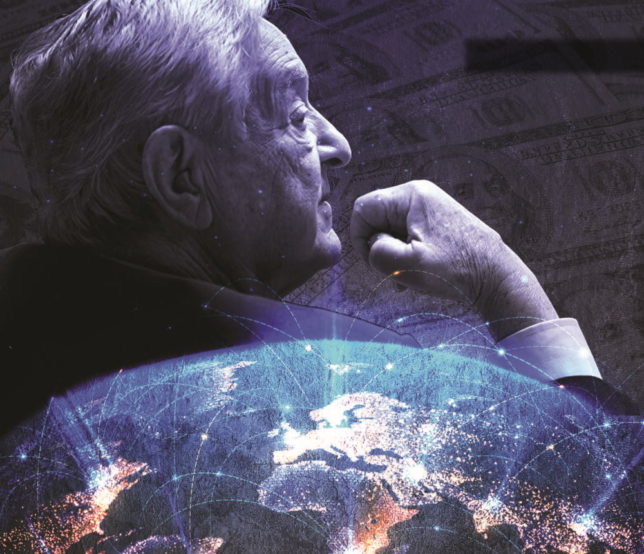 Billionaire financier and philanthropist George Soros, “the man who broke the Bank of England,” has a philosophy about how society should work, adapted from philosopher Karl Popper’s theory of the “open society.” Accordingly, he founded dozens of foundations to push the world in that direction, led by his flagship nonprofit Open Society Foundations. He is open about his objectives. As of 2017, Soros had donated more than $32 billion to his foundations to realize his “open society” vision and his foundations give away almost $1 billion dollars annually to make “open society” a global reality.

The Open Society network of foundations and nonprofits has a physical presence in dozens of countries around the world, supporting largely left-wing causes. The network has incurred the displeasure of several governments, including those of the Russian Federation—which could arguably be more of a credit than a black mark—and Hungary, Soros’s birth country.

Billions of dollars flowing through such a tangled web of organizations have inevitably generated widespread speculation, more than a few conspiracy theories, and sometimes outright fear. The Open Society network’s ironic lack of transparency only feeds the speculation and concerns.

Untangling this “riddle, wrapped in a mystery, inside an enigma” would be the work of a lifetime, if not many lifetimes. Money and influence flows through the network to its allies in countries around the world, but the exact amounts, destinations, and purposes are largely hidden.

Researchers at Capital Research Center have pulled on several threads of this mystery, including massive funding of district attorney candidates in local U.S. elections, meddling in European parliamentary elections, and supporting of caravans of migrants attempting to cross the U.S. southern border.

Since 2015, Soros has spent more than $17 million on district attorney and other local races in swing states such as Pennsylvania, Virginia, and Arizona and in large, predominantly left-of-center states such as California and New York. These huge contributions make it difficult for the other candidates to compete. District attorney elections are usually on a small scale and the campaigns typically do not need to raise millions to run local ads and mobilize voters. When Soros’s vast resources appear, constituents are swamped with propaganda, and the opposing non-liberal candidates are often victims of unfair character assassinations, such as defaming them as racists and white supremacists.

His objective apparently includes ending “mass incarceration” in American prisons. What started as contribution to the American Civil Liberties Union has evolved into a broader, more granular effort to change the U.S. law enforcement system from the ground up by electing likeminded local prosecutors.

Leaked internal documents from OSF, headquartered in New York City, demonstrate clear intent from the top to deliberately alter election outcomes in other countries, particularly in the 2014 elections for the European Parliament and some national parliaments in Europe.

In the early 2010s, OSF became increasingly worried about the European Union and the trends in Europe that were creating an increasingly hostile environment for OSF. To counter and even reverse these trends, OSF adopted “a two-level strategy to reduce the number of opponents of the open society who get elected.” Open Society Initiative for Europe (OSIFE) distributed $5.7 million to organizations to “to turn out the vote” in sympathetic constituencies. Open Society European Policy Institute (OSEPI) was assigned to “engage pan-European parties to influence their manifestos and campaigning tactics.” However, these efforts to achieve particular election outcomes appear to violate U.S. tax law on nonprofits.

A leaked internal OSF document indicates that OSF’s International Migration Initiative provided 40 grants totaling more than $8 million to 22 organizations during 2014–2016. Almost half ($3.7 million) went to organizations working on migrant and refugee issues in the “Asia/Middle East corridor” and the “Central America/Mexico corridor.” In North America, Soros and his foundations are apparently trying to erase U.S. national borders by facilitating refugee crises on the U.S. southern border—much like the European refugee crisis (2015–2017) put massive pressure on the European Union. OSF invested $136 million to influence societies, politics, and economics in Latin America from 2015 through 2018, along with tens of millions of dollars for U.S. groups supporting illegal immigration. The migrant caravans assembled in this context, and contrary to media narratives, the migrations were not spontaneous.

What We Don’t Know

States and many other countries.