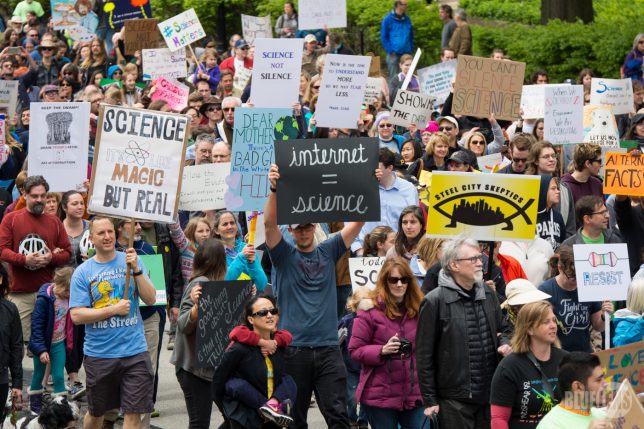 Summary: The American Association for the Advancement of Science (AAAS) is the largest general science organization in the world; judging by the accomplishments of many of its members, it has contributed widely to our understanding of science and technology. But the association also has a long and painful history of “science-activism”—promoting ties to Marxist and other extremist groups, propounding junk science theories, and supporting draconian population control policies.

Shall the Clay Question the Potter?

Not all of AAAS’s leaders have been crypto-communists and eugenicists, of course. Some were merely scientific charlatans.

The dewy-eyed New York Times hailed Mead’s book as “unbiased in its judgment, richly readable in its style…a remarkable contribution to our knowledge of humanity.” It sold hundreds of thousands of copies, making it the most widely read book on anthropology for forty years. That changed in 1983, when New Zealand anthropologist Derek Freeman (who had lived in Samoa since 1940) published Margaret Mead and Samoa: The Making and Unmaking of an Anthropological Myth. It turns out, Freeman discovered, that the Samoans shared the same stigmas against premarital sex and infidelity as every other culture on Earth. A 1988 documentary based on Freeman’s work cited one of the Samoans Mead had interviewed five decades earlier:

We girls would pinch each other and tell her we were out with the boys. We were only joking but she took it seriously. As you know, Samoan girls are terrific liars and love making fun of people but Margaret thought it was all true.

Nevertheless, Mead’s book paved the way for her to join the AAAS and the American Anthropological Association as “the most famous anthropologist in the world.” She’s frequently listed as one of the greatest anthropologists and female scientists of the twentieth century. The Society for Applied Anthropology offers an annual Margaret Mead Award. In 1979, President Jimmy Carter posthumously awarded Mead with the Presidential Medal of Freedom. Her face appeared on a 1998 USPS postage stamp. Someone even named a crater on Venus after her.

Mead’s Marxist-tinged teaching that infants are essentially moldable putty was welcomed by numerous behavioral psychologists. It seemed to greenlight as “scientific” the promotion of sexual promiscuity, cultural relativism, atheism, and other favorite topics of the Left. In reality, Mead’s approach to anthropology—which her husband, Luther Cressman, later criticized as always “If it isn’t, it ought to be”—proved to be confirmation bias disguised as science. Sloppy fact-checking was too-quickly labeled “classical research” by Mead and many in the scientific community. Mead’s own purported attraction to casual sex and bisexual relationships romanticized the otherwise ordinary reality of Samoan sexual attitudes. Her dislike of religion further cemented her argument that profligate islanders were guilt-free atheists—and not the “devoted polytheists” and, later, pious Christians they actually were.

According to data from the website Foundation Search, the organization received just under $60.7 million in 352 grants between 1995 and 2016. Most of that money came from a number of large foundations, including the Golden Family Foundation, a New Jersey-based 501(c)(3) private grantmaking foundation responsible for the AAAS’s largest donations: $5.3 million in 2003 and $4.4 million in 2015 ($9.9 million in total, including additional grants). Other major funders to the AAAS include the left-leaning David and Lucile Packard Foundation (nearly $5 million); Larry Ellison’s—founder of the technology firm Oracle—Lawrence Ellison Foundation ($5.1 million); the Maryland-based Howard Hughes Medical Institute ($1.5 million); and smaller donations from the MacArthur Foundation, Verizon Foundation, Moore Foundation, Rockefeller Foundation, Carnegie Corporation of New York, and the Joyce Foundation (whose board once included Barack Obama).

But AAAS’s biggest funder is the federal government. Between 2008 and 2017, federal funding to AAAS averaged over $3.3 million annually, with grants ballooning from $2.92 million in 2016 to over $13 million in 2017. Data from the website USA Spending (managed by the Office of Management and Budget) shows AAAS received $27.9 million in 451 contracts between 2004 and March 2018. Of this sum, the largest contracts were given to AAAS by the Department of Health and Human Services (largely from its sub-agency, the National Institutes of Health) and the Department of Homeland Security. AAAS received another $41.5 million in 25 grants between 2011 and December 2017, of which an overwhelming majority ($35.5 million) came from the National Science Foundation.

What do you get when you cross science with politics? Would that it were a joke; in reality, the science-activism of the AAAS threatens both scientific inquiry and American public policy.

Modern science developed out of an appreciation for the freedom to pursue independent thought, guided by respect for the Christian moral landscape that fathered it. Early scientists like Francis Bacon and Isaac Newton were as devoted to the study of God as they were to His creation. The rigorous scientific method they developed reveals a devotion to the search for ultimate truth—a search their progressive-minded successors have swapped for political ends. Phrenology (identifying one’s personality by the bumps on their skull), eugenics (human selective breeding), and racial biological supremacy theories are all examples of the more dangerous agendas pushed by science-activists.

Perhaps the AAAS could learn something about the prudent pursuit of truth from the famed astronomer and almost-Lutheran minister Johannes Kepler, who penned the words of his own epitaph shortly before his death in 1630:

I used to measure the heavens,

Now I must measure the earth.

Though sky-bound was my spirit,