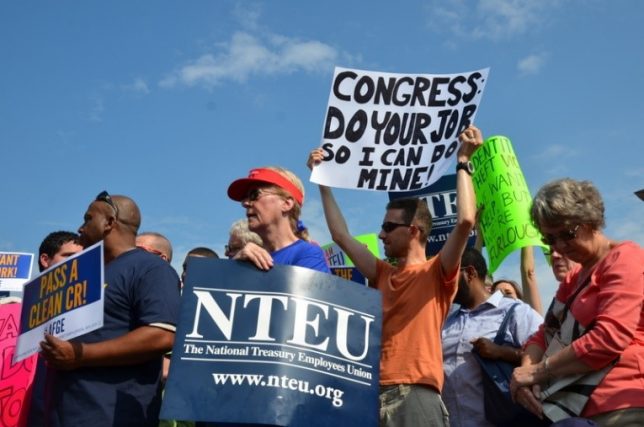 Summary: Banking millions of dollars in pay raises and bonuses for its members? Check. Corrupt officials charged with fraud and embezzlement? Check. Donations to the Democratic Party? Check. The National Treasury Employees Union has it all. But some say that the union played a key role in the IRS’s scheme to target Tea Party groups ahead of Barack Obama’s 2012 reelection campaign.

The National Treasury Employees Union (NTEU) represents tens of thousands of employees in the Treasury Department, most notably those who work in the Internal Revenue Service (IRS). As far as labor unions go, it’s par for the course; like many unions, the NTEU has had its share of corrupt officials charged with embezzlement, fraud, and even bank robbery. It’s a regular supporter of the Democratic Party, and its leaders had connections with the Obama administration.

But some think that there’s a darker side to the NTEU’s connection with the former president—suggesting that the union may be the key to unravelling the 2010 plot to target Tea Party groups headed by Lois Lerner, then-head of the IRS Exempt Organizations division.

History of the NTEU

The National Treasury Employees Union began in 1938 with the unwieldy name of the National Association of Employees of Collectors of the Internal Revenue—less a labor union than a professional association with limited aims at securing better salaries and working conditions. Originally limited to the Wisconsin employees who founded it, the association expanded membership to include all IRS employees around the time of the reorganization of the Internal Revenue Service (IRS) in 1952.

In the mid-1960s, there was a short-lived effort to organize the association into a full-fledged labor union as a part of the much-larger American Federation of Government Employees. The effort was defeated, however, as the association moved toward establishing itself as an independent labor union encompassing all Treasury Department employees by the early 1970s, when NTEU adopted its current name.

The NTEU has a well-established reputation for suing parts of the federal government in order to obtain settlements and benefits for its members.

In 1973, the union successfully sued President Richard Nixon for denying “a 5.14 percent pay increase . . . contrary to the Federal Pay Comparability Act.” The suit (settled in 1975, after Nixon had resigned) resulted in $533 million in backpay to federal employees. Ten years later, the union again sued the government over salaries—a suit which was settled (nearly two decades later) in December 2002 with $173.5 million in backpay to some 212,000 “former special rate federal employees” (employees in positions the government has historically struggled to keep filled, such as medical and law enforcement personnel).

In June 2006, NTEU defeated its major competitor, the American Federation of Government Employees (AFGE), for the right to represent roughly 30,000 employees of the Department of Homeland Security’s Bureau of Customs and Border Protection (CBP), an election certified by the Federal Labor Relations Authority in early 2007. A decade later, the union settled a lawsuit against CBP for $184 million in overtime and other salary appropriations not paid to employees.

Sometimes NTEU has been successful at simply pressuring the government into paying out millions of dollars. In 2013, IRS Acting Commissioner Danny Werfel canceled $98 million in bonuses to IRS employees, citing budget cuts. “Given the unprecedented budget situation and consistent with government-wide policy,” he said in a statement, “I do not believe there should be performance awards this year for IRS employees, managers, or executives.” The announcement came on the heels of scrutiny from House Republicans following the discovery that the IRS had improperly targeted conservative and Tea Party nonprofits prior to the 2012 presidential election.

Naturally, then-NTEU president Colleen Kelley disagreed. “It is NTEU’s position that the awards are legally required as part of the collective bargaining agreement between NTEU and the IRS,” she said in her own statement. In February 2014 (and at NTEU’s urging), Werfel’s successor, John Koskinen, partially reinstated the 1.75 percent pay bonuses (amounting to $62.5 million) to IRS employees.

In the next installment of Litigious Labor in the White House, learn about the treasury workers’ partisan leanings.