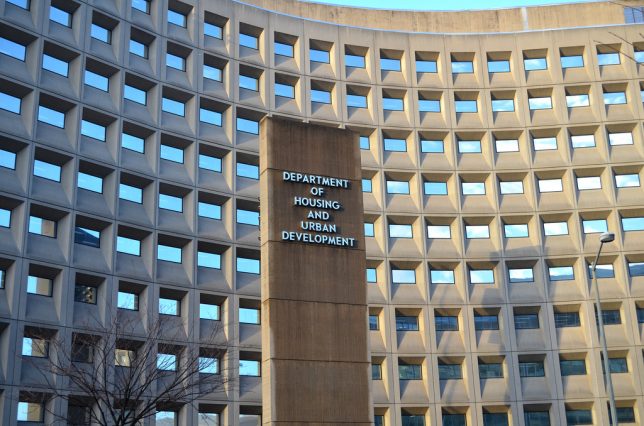 Now that Donald Trump is president, dissent is patriotic and investigative journalism is suddenly cool again.

Aided by Obama holdovers and leakers from the White House on down, virtually every nook and cranny of the Trump administration is now being FOIA-ed and scrutinized by reporters in search of potential wrongdoing.

Now we learn that after less than a year on the job U.S. Department of Housing and Urban Development Chief Information Officer Johnson Joy recently resigned when a left-wing newspaper highlighted his connection to a mysterious Trump-friendly Christian nonprofit in Texas. Maddeningly, the Guardian fails to mention that HUD has been corrupt and scandal-plagued since it was created in 1965 as a component of President Lyndon Johnson’s futile War on Poverty. Corruption and dysfunction are normal at the Robert C. Weaver Federal Building in the heart of the nation’s capital no matter who is president.

Joy left the agency after the Guardian reported that he was running “an opaque religious charity with a colleague,” senior HUD adviser Naved Jafry, “who resigned from the administration when the Guardian found he was accused of fraud and exaggerated his biography.”

If you dig a little deeper you will find that Jafry was not charged with fraud. Business associates and the widow of an investor accused Jafry of fraud, an allegation he denies.

Johnson administered the group, GJH Global Ministries, alongside Jafry who became its registered agent in January.

According to the British newspaper, the nonprofit’s mission statement appears to have been cribbed from other groups and it was unclear what the nonprofit actually did to carry out its charitable mission.

GJH was formed in 2014 but Stephen Austin, one of its directors, said in a brief interview:

“We literally did nothing.”

Following inquiries by the Guardian, GJH’s website was locked from public view. Other directors declined to be interviewed. The group last filed a tax return with the Internal Revenue Service for 2014. Churches and affiliated groups are not required to file annual returns.

By the same token, the newspaper article didn’t produce evidence of fraud or wrongdoing at GJH. Being small-time is not illegal. Plenty of people start nonprofits only to lose interest in them or to have plans fall through. It is not a crime.

Although nonprofit entities are not allowed to endorse political candidates, GJH’s website contained a photo of Joy speaking to an audience whose members wore Trump campaign hats and carried Trump signs. In another picture, Joy posed with Greg Abbott, the Republican governor of Texas, the newspaper reported.

Whether any of this actually matters in the scheme of things is a different question altogether because it isn’t at all clear if GJH Global Ministries is active or that it has run afoul of any laws. Besides, the IRS wouldn’t necessarily strip the nonprofit of the tax-exempt status it was given in 2015 simply because there are photos of Republicans on its website. Perhaps GJH’s leadership had plans for the nonprofit that had yet to be realized. It’s not like GJH would be the only nonprofit that was inactive in the beginning before it got its act together.

GJH is required to file an IRS Form 990-N, which suggests the nonprofit is tiny. The IRS Form 990-N is for “[m]ost small tax-exempt organizations whose annual gross receipts are normally $50,000 or less,” the IRS states on its website.

Make no mistake: the case of Johnson, Jafry, and GJH Global Ministries is a legitimate subject of inquiry by the media, but the left-wingers at the Guardian really don’t have much on Jafry, and even less on Johnson. They want to make Trump guilty by association. That the two men are Christians with connections to a well-known televangelist may have also figured in the Guardian’s calculus.

But conservatives have to wonder where these guardians of civic virtue were during the eight long years of Barack Obama’s presidency? Why were these gumshoes twiddling their thumbs while President Obama was using HUD as a piggy bank for his friends and allies in the world of left-wing organizing?

At HUD, corruption and incompetence are more or less normal. The department is plagued by fraud, misappropriation, mismanagement, and cronyism. Long a plaything of left-wing activist groups, HUD helped to create the 2008 financial crisis by encouraging high-risk mortgage lending while conducting lax oversight of secondary mortgage market giants Fannie Mae and Freddie Mac.

HUD often doesn’t monitor or follow up properly on grants and grantee groups, some of which hoard or misuse taxpayer funds.

Scammers view HUD as an easy mark and this image of the agency has leaked into popular culture. For example, in a case of art imitating life, writers at the TV series, “The Sopranos,” used HUD as the clueless victim of a mortgage fraud scheme run by mobsters and a community development nonprofit.

HUD’s “Section 8” housing welfare program is criticized by both the Left and Right as ineffective and fraud-prone.

The perennially dysfunctional HOPE VI “revitalization” program is supposed to demolish or rehabilitate severely distressed public housing. Billions of dollars in grants have gone to housing development nonprofits but relatively few housing projects have been demolished or rehabilitated. HUD’s inspector general found in 2013 that the agency unfairly handed out grants under the program without bothering to notify the public of the availability of funding.

The agency has been in so much trouble over the years that author Irving Welfeld wrote a whole book on its tribulations titled, HUD Scandals: Howling Headlines and Silent Fiascoes.

A Cato Institute paper by Tad DeHaven described HUD as “a sort of graduate school for ethics-challenged officials.”

There was President Reagan’s legendarily corrupt HUD secretary, Samuel Pierce. During his tenure, an independent counsel probe of the agency led to 17 convictions, including three former assistant secretaries of the department. Former Trump campaign manager Paul Manafort was embroiled in a Reagan-era scandal involving the alleged diversion of HUD funds to Republican operatives. Manafort was not charged in the affair but others were.

President Clinton’s first HUD secretary, Henry Cisneros, resigned from the post in disgrace after he lied to the FBI in the course of an investigation. Another Clinton-era HUD secretary, the current governor of New York, Andrew Cuomo (D), used the agency as a vehicle for self-promotion, spending close to a million dollars on a flashy booklet depicting HUD under his leadership as civil rights crusaders. Cuomo also reportedly bombarded his home state with HUD funding in the run-up to his gubernatorial campaign.

Sadly, investigative journalists went into a coma when Obama was inaugurated. They completely or largely ignored the IRS targeting of conservative nonprofits, the fraud that is Obamacare, Obama’s abuse of executive power, the Fast and Furious gunrunning scandal, the war on legitimate whistleblowers and abuse of the Espionage Act, spying on journalists, the corrupt administration of the Troubled Asset Relief Program (TARP), the huge expansion of welfare programs, the unconstitutional Deferred Action on Childhood Arrivals (DACA) program, the Benghazi cover-up, Hillary Clinton’s illegal email servers, Operation Chokepoint, the attempt to politicize the U.S. Census, the attempt to use government funds to generate pro-Obama art, forcing men into women’s change rooms and bathrooms, the deadly treatment waiting lists at the VA, and the dishonest White House-orchestrated propaganda campaign in support of an insane nuclear nonproliferation deal that empowers Iran.

In 2011 the Obama administration showered its allies at ACORN Housing, which was the largest affiliate in the now-defunct ACORN (Association of Community Organizations for Reform Now) activist network, with $729,849 despite evidence of corruption and massive accounting irregularities. A 2010 audit determined that ACORN Housing was incapable of administering federal funds properly, had poorly-trained staff and questionable accounting procedures, and violated conflict-of-interest guidelines laid down by the Office of Management and Budget. To add insult to injury, as of July 2011, ACORN Housing and its subsidiaries owed $162,813 in back taxes to the IRS and other tax-collection agencies.

As I detailed in my 2011 exposé of ACORN and Obama, Subversion Inc., the federal government gave at least $79 million to ACORN and its affiliates before the group filed for bankruptcy in November 2010.

Reporters showed little interest in all these scandals that erupted during the Obama administration.

But now so much of what President Trump does in his daily duties is treated as irregular or unacceptable behavior no matter how many previous presidents have done the same thing. For example, Trump’s firing of U.S. attorneys left over from the previous administration – something all modern presidents do after assuming office – was marginally newsworthy, yet it was treated as a major scandal that threatened American democracy. And so it has been with so many other Trump initiatives as the left goes to great pains not to “normalize” Trump’s presidency.

Funny how the mainstream media only notices potential government mismanagement when Republicans are in power, isn’t it?