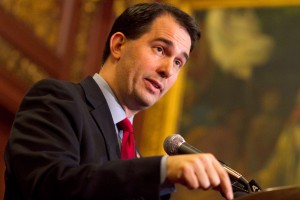 As the 2014 election neared, and the unions had their third chance to stop Walker, the Governor appeared to be in danger of losing. In mid-October, the RealClearPolitics average of polls had Walker ahead by only 47.7 to 47.3. Given that challengers usually receive the lion’s share of undecided voters, any incumbent polling under 50 percent with a challenger close behind is in serious trouble.

Walker’s opponent was formidable: Mary Burke, who had served as the state’s Secretary of Commerce under former Gov. Jim Doyle, Walker’s predecessor. Burke won the Democratic primary 83-17 over state Rep. Brett Hulsey. Hulsey was considered a gadfly. A liberal, he had reportedly tried to make a deal to join the GOP caucus in the Assembly, then, supposedly to satirize Republicans’ racism, dressed as a Confederate major to greet Republicans attending their state convention.

Burke was rich, the daughter of the founder of Trek Bicycle Corporation, and her wealth was spotlighted during the campaign. Democrats cheered her ability to “self-finance” her campaign. That’s an important quality in a candidate today, given that campaign finance laws make it difficult for people of modest means to raise money for a major campaign. Burke eventually spent a reported $5 million of her own money in the governor’s race.

Republicans questioned Burke’s ability to understand the problems of working-class people and small-business-class people, particularly in light of her attacks on the Tea Party movement. It turned out that, to win her only elective office, a local school board seat in Madison, she had spent $128,000 of her own money. Particularly damaging to Burke was the revelation that she had taken off from work for two years to “find herself” and go snowboarding in Colorado and Argentina. (Details of the trip are murky because Burke refused to clarify what happened.) “Yes, she’s a wealthy business owner who took time off to snowboard,” wrote Joan Walsh of the left-wing online publication Salon, but “She’s also a philanthropist who gave her time and money to Madison’s Boys and Girls Club” and other nonprofits.

Walsh wrote that, “In the crowd of mostly retirees [at a Burke campaign event], there’s a fondness for Burke, an odd gratitude that this affluent woman, a comparative newcomer to politics, has graced their party, and their state, with such a high-minded campaign. If this is noblesse oblige, bring it on.” [For the rest of the article, click HERE.]