A Union Bank with a Goal—Victory for the Left

Does Amalgamated Bank serve working Americans, or gamble with their money? 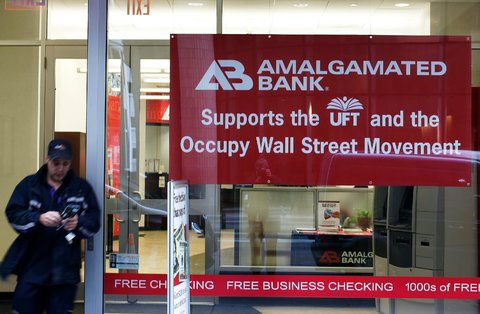 Summary: Amalgamated Bank is America’s only union-owned bank. The latest chapter of its tumultuous history finds it specializing in political work that few financial institutions would dare risk. Funded by monies that unions compel their members to provide, the bank seems less devoted to maximizing returns for customers than to assisting left-wing candidates and causes in their quest for power. (This report updates Capital Research Center’s profile of Amalgamated Bank that appeared in the June 2013 Labor Watch.)

Amalgamated Bank is the exception. It’s a bank they like.

A union-owned institution with extensive ties to the Democratic establishment, it is embraced by the Left. Increasingly, it is a player in the financial field, run by and patronized by the labor movement and its allies. With its blend of specialized political financing and ideological bent, Amalgamated has attracted high-profile accounts—the Democratic National Committee, a pro-Hillary Clinton superPac, and a hundred others of like mind.

For an example of the way the bank has brought political titans and their union patrons together under its expanding umbrella, consider this story: On September 27, Keith Mestrich, president and CEO of Amalgamated Bank, stood beside Randi Weingarten, president of the American Federation of Teachers, at a glitzy Clinton Global Initiative event and together pledged to invest $100 million in early childhood education. Left unspoken: the same union had endorsed Hillary Clinton’s campaign only weeks before, supposedly because of the very same issue.

Nor was the American Federation of Teachers a stranger to its partner in this Progressive investment; the union also happens to be a major client of the bank.
The bank has positioned itself as an innovator in the nascent niche of political investment banking, offering cash infusions on short notice to political action committees and campaigns and providing round-the-clock service to political groups that operate far outside traditional banking hours. For unions in the corporate world the bank has also become an unconventional vehicle for change. As the home of billions of dollars in union pension funds—strategically invested across a broad portfolio of companies—Amalgamated essentially gives the labor movement a seat at the corporate governance table and thus an influential voice in how big businesses operate.[Click HERE for the rest of the article.]

Sarah Westwood is an investigative reporter for the Washington Examiner, from which this article was adapted.
+ More by Sarah Westwood