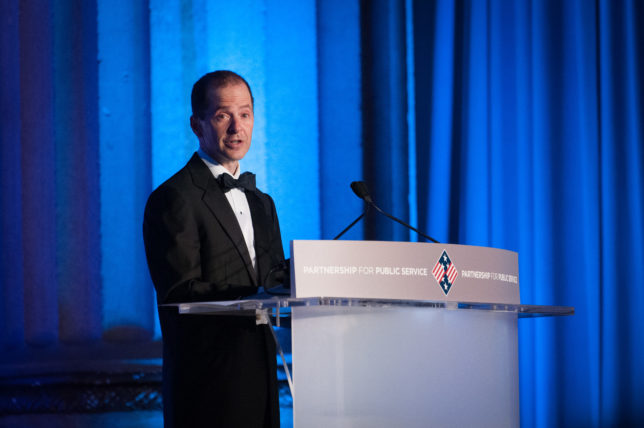 President and CEO of the Partnership for Public Service, Max Stier, gives his opening remarks at the 2013 Samuel J. Heyman Service to America Medals. https://www.flickr.com/photos/publicservice/10156306814/sizes/o/
by Shane Devine

A man named Max Stier recently entered the news cycle after the New York Times reported that he claims to have witnessed Supreme Court Justice Brett Kavanaugh involve himself in an indecent sexual act during a college party when he was a student at Yale University. The Times also mentioned that Stier had notified the FBI and senators about his allegations during the confirmation hearings for Kavanaugh but added that the FBI decided not to investigate his claims and Stier declined to speak about the matter publicly.

However, it turned out that the female student said to have been the victim in the alleged incident did not speak with Times reporters, and the Times later added an editor’s note to the article stating that her “friends say she does not recall the episode.” On top of that, Stier’s account itself reportedly made it to the Times second-hand. Now the story is out of the news cycle. But who was this Max Stier?

Stier and Kavanaugh not only overlapped at Yale (where Stier received his undergraduate degree), the two later crossed paths in the early stages of their legal careers in the 1990s: while Kavanaugh was working for then-Independent Counsel Ken Starr, the man who wrote a report establishing grounds for Bill Clinton’s impeachment, Stier was working for Williams & Connolly, the firm that represented former President Bill Clinton during the Monica Lewinsky scandal.

Stier went on to work in various positions in the federal government until he finally found a home as the CEO and president of the Partnership for Public Service, a nonprofit dedicated to promoting government.

Stier has stated that one of the “core principles” of the Partnership for Public Service is to help the government become more efficient because it “does not have adequate metrics to allow it to understand its own effectiveness.” On another occasion, he claimed that the 9/11 terrorist attack on the World Trade Center “really made the government relevant in people’s lives in a way it hadn’t been for a couple of generations,” adding, “9/11 made us realize in fact we were at risk, and that the primary vehicle to address this challenge was our government.” He also advised that the American public should think of government workers in the same way that they think of the military.

In practice, the Partnership for Public Service provides leadership training to federal employees, gives out medals and cash prizes to government workers at a swanky annual award show (Amazon CEO Jeff Bezos spoke at the 2018 “Sammies,” as they are colloquially called) with the explicit intention to cause more people to desire government jobs, and helps operate the Call to Serve program, a career fair of sorts that targets over 600 college campuses across the country to promote government jobs to graduating students. The Partnership works very closely with federal agencies in operating this program, the Office of Personnel Management (OPM) in particular. In 2005, the Partnership was given a government grant of $600,000 for this program.

Since 2008, the Partnership has received an estimated $20.6 million in federal grants. (In other words, taxpayer money was spent on a program to showcase how the government benefits taxpayers.)

The Partnership for Public Service has such a degree of influence on the government that it persuaded Congress to create the Congressional Public Service Caucus, designed to audit the federal government as if the Partnership were its very own consultancy firm, in turn offering them advice for hiring processes and projects. The Partnership has convinced multiple federal agencies to shorten their hiring methods by “eliminating many steps in the application process.”

While the Partnership worked with both the Trump and Clinton campaigns during the 2016 election to ensure that the government appointee process would go smoothly regardless of which candidate won, it later went on to launch a tracker with the Washington Post to keep watch on who President Trump nominated to various positions throughout the government agencies.  The group did not create a tracker for any previous administration.

As of July 2018, the Partnership was receiving support from 43 corporate sponsors including Microsoft, Deloitte, AT&T, Citi, JP Morgan, and Morgan Stanley. Outside of the $45 million endowment left behind by the organization’s founder Samuel J. Heyman and the millions contributed by the Annette Heyman Foundation (which seems to be eponymous for the late Samuel’s mother), the Partnership’s major funders are the Bill and Melinda Gates Foundation, the Annenberg Foundation, the Robertson Foundation, and the Ford Foundation.

The government—along with giant foundations, banks, and corporations that like to lobby the government—pay Max Stier’s group to advertise government jobs to college students, many of them having just taken out government loans to go to government-funded schools. In effect, the tax money of U.S. citizens was spent promoting ways to increase your taxes, as more positions filled by students will require money to pay their salaries and benefits; and in turn, everything they do at their jobs—administering programs and expanding budgets—will cost tax money.

Stier and his team may need to consider a different way to look at the question of government efficiency.

Players in the Russia Collusion Hoax: The Praetorian Guard

Players in the Russia Collusion Hoax: The Activists, Part 1

Players in the Russia Collusion Hoax: The Activists, Part 2