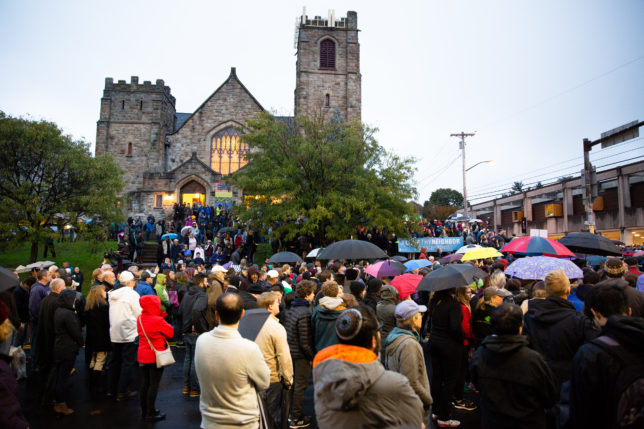 On Wednesday, activists from two left-wing Jewish organizations, Bend the Arc: Jewish Action and IfNotNow, interrupted a speech by President Trump in Pittsburgh to blame him for the attack on the Tree of Life synagogue.

In a video posted by IfNotNow, a group primarily known for its boycott of Birthright trips, activists can be heard screaming, “Trump endangers Jews!” According to IfNotNow’s Facebook post, the activists disrupted Trump’s speech “one year after he incited the deadliest attack on Jews in US history.”

WATCH: 8 Jews just disrupted @realDonaldTrump’s speech in Pittsburgh — one year after the Tree of Life shooting.

Trump continues to endanger Jews and all of us. #OurSolidarityWill defeat white nationalism.

Tree of Life synagogue shooter Robert Bowers actually hated Trump because of his Jewish family and his perceived fondness for Jews. By blaming Trump for the attack on Jews, left-wing Jewish activists are actually—if one uses their logic—blaming the victim.

Social media posts by Bowers reveal that he despised Trump. His social media posts include deeply offensive slurs in reference to Jews, comments about how he has never voted for Trump nor owned “a maga hat,” and posts depicting Trump as being supposedly controlled by Jews:

Posts from the suspected Pittsburgh shooter Robert Bowers. He hated Trump and thought Trump was controlled by Jews. This monster is an unhinged anti-Semitic terrorist. pic.twitter.com/sjb2k6ucwb

These social media posts have been referenced by mainstream news outlets, although they have not prevented Jewish activists (and even Linda Sarsour) from blaming Trump for the shooting in their social media commentary.

The posts about Bend the Arc and IfNotNow protesters interrupting Trump to exclaim that he somehow endangers Jews come just days after the White House erected its first sukkah, a temporary dwelling while celebrating the holiday of Sukkot, and after Trump’s daughter, son-in-law, and grandchildren celebrated the Jewish holidays.

It is, unfortunately, no surprise that left-wing Jewish activists are capitalizing on Pittsburgh to bash Trump. Even CBS News’ reporting on the matter included the caveat as an editor’s note that although Bowers did not support Trump, he supported Trump’s views. It is clear that the left-wing Jewish activists are willing to distort what actually happened in Pittsburgh and Poway, and the true motivations of the shooters, in order to support their narrative.

IfNotNow, meanwhile, has a donate page that mentions donations to both the IfNotNow Movement, a 501(c)(4) and the 501(c)(3), IfNotNow Education Fund. The 501(c)(3)’s mission, according to its summary, is explicitly about Israel. IfNotNow’s Education Fund claims it “conducts educational campaigns within the American Jewish community to support the movement to end American Jewish communal support for the Israeli occupation of Palestine and support freedom and dignity for all Israelis and Palestinians.” The Education Fund’s total revenue in its recent tax filing was less than half a million dollars, at $497,453.