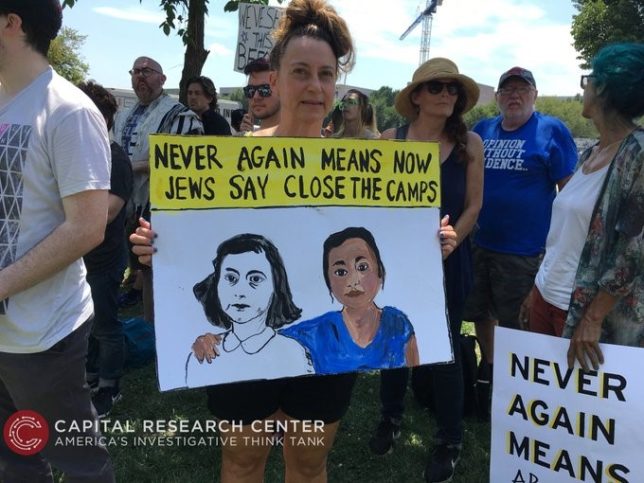 Donations to Never Again Action, the Jewish anti-ICE organization famous for drawing comparisons between immigration policy and the Holocaust, previously went to an explicitly Southeast Asian organization and an organization dedicated to defending illegal immigration, rather than any Jewish causes. 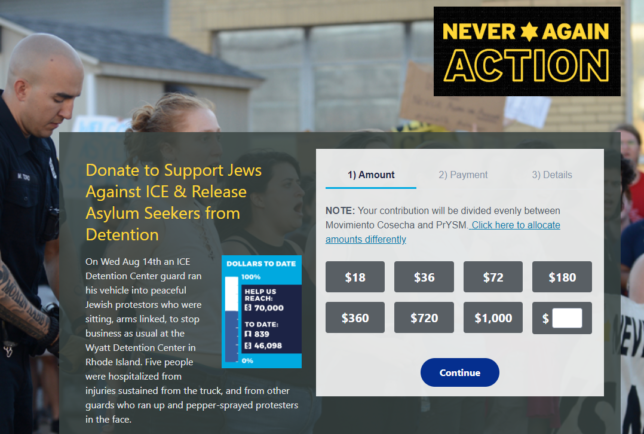 Never Again Action is working alongside immigrant led organizers and organizations within Rhode Island and nationally. Money raised on this page will support Never Again Action, Movimiento Cosecha, and AMOR (Alliance to Mobilize Our Resistance), which is a coalition of directly affected and people of color led organizations based out of Rhode Island. All the money given to AMOR (appears as PrYSM on the donation page, who are their fiscal sponsors) will go directly to bonding immigrants out of concentration camps in Rhode Island. Bond ranges from $35,000 to $60,000 to release just one person. Please support us today.

At the time, there was no indication of exactly how Never Again Action was involved with PrYSM and Movimiento Cosecha, the sole beneficiaries of all grants to the supposedly Jewish interest group.

As of Rosh Hashanah (Sept. 29 to Oct. 1), Never Again Action circulated an email campaign debuting its “official organizational launch.” The group’s new donate page claims contributions will go to Never Again Action. On this new incarnation of the donate page, PrYSM or Movimiento Cosecha are unmentioned: 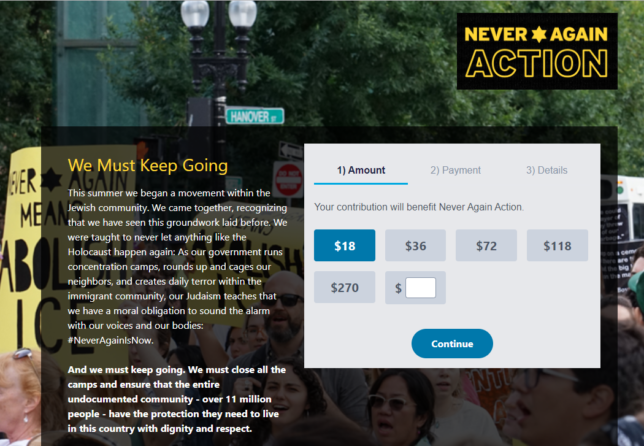 A July 2019 report in Jewish Currents states Never Again Action was created when Movimiento Cosecha organizer Serena Adlerstein published a Facebook post asking how Jews were going to respond to the alleged concentration camps on the border. According to the Jewish Journal, Adlerstein is a full-time organizer with Movimiento Cosecha and is one of the three original leaders of Never Again Action.

Never Again Action spokesperson Jamie Goodman told the Jewish Journal, “We want to get the message out. We’re here as Jews to show our support for organizations like Movimiento Cosecha.”

If Movimiento Cosecha sounds familiar, it’s because one of its organizers famously disrupted her Birthright trip to Israel in January at the behest of anti-Israel Jewish group IfNotNow.

A September 2019 investigation by Legal Insurrection detailed striking similarities between the tactics used by the vehemently anti-Israel group IfNotNow and Never Again Action. Most importantly, both organizations coopt the Holocaust and make it a central theme to defend their political positions. However, there is even more overlap between the leaders of Never Again Action and IfNotNow.

Never Again Action’s Tali Ginsburg sent an email to the group’s mailing list inviting supporters to join the Never Again Action’s Local Leaders Cohort to “equip our network with the skills and resources needed to take bold action in our fight against the deportation and detention machine.” The Google form asks prospective applicants if they will be available to participate in an Action Camp.

According to the description of the Action Camp, it’s for people who are “not f*****g around” and will be training leaders for the groups “IfNotNow, Jews Against White Nationalism, Never Again Action, and more to come!”

Before asking about involvement in Never Again Action, Never Again Action’s form asks if prospective applicants have been involved with IfNotNow. These are mandatory questions, although the form says that individuals do not need to be involved in either group to participate in the Action Camp. 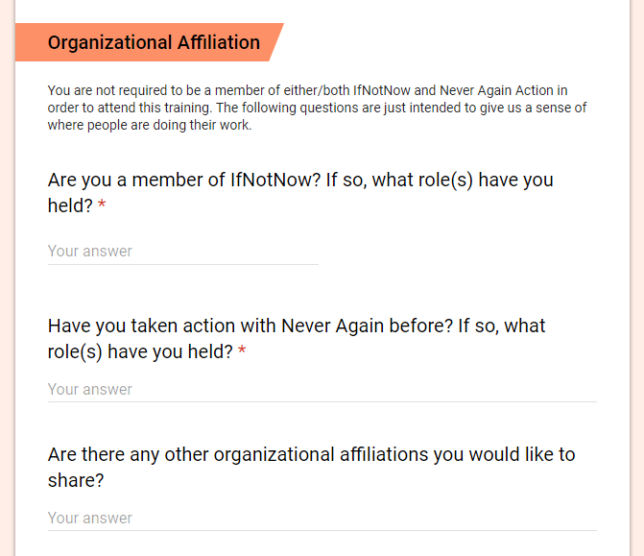 In a recent article shared on the IfNotNow website, Alyssa Rubin, a leader of IfNotNow Boston and a cofounder of Never Again Action, states that IfNotNow “helped us start a movement to stop ICE” and points to IfNotNow and Movimiento Cosecha as the starting point for Never Again Action:

Within days, a group of Jews who were connected to each other through IfNotNow, Movimiento Cosecha, and other progressive Jewish and non-Jewish organizations came together to mobilize a Jewish response to the concentration camps at the border and ICE’s detention and deportation machine. We decided to call it Never Again Action.

She adds, “We were only able to mobilize so quickly because of the network of Jewish organizers that have been developing their skills, building trust, and preparing for mass mobilization for years in IfNotNow and other movements.”

In addition to Movimiento Cosecha, donations from the original inception of Never Again Action also went to PrYSM. PrYSM, the Providence Youth Student Movement, an explicitly Southeast Asian group. In fact, on PrYSM’s own donation page, it says the group is “building southeast asian youth power since 2001 [capitalization theirs].” Donations to PrYSM are meant to help the Southeast Asian community and to “build a housing cooperative for QTPOC to creating CopWatch teams to implementing a groundbreaking police accountability ordinance.”

As Never Again Action’s donation page stated, donations to AMOR, the Alliance to Mobilize our Resistance, go to PrYSM: 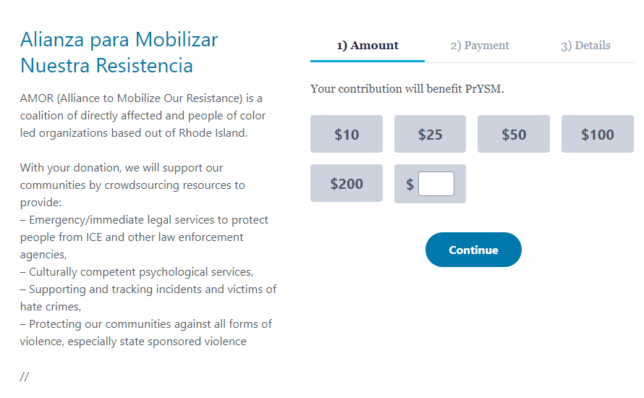 AMOR’s Facebook page reveals that, in addition to PrYSM, it is made up of the anti-capitalism “liberation” group Direct Action for Rights and Equality (DARE), the anti-fracking Fighting Against Natural Gas (FANG Collective), the pro-prostitution Call Off Your Old Tired Ethics (COYOTE), the Latin American migrant support group Colectivo Sin Fronteras, and the pro-refugee Refugee Dream Center. None of these groups have an explicitly Jewish message, like Never Again Action.

With the new Jewish year, Never Again Action is attempting to create its own independent organization, but that does not absolve the group’s past of exploiting the Holocaust, the history of the Jewish people, and Judaism itself for political causes that do not even assist Jews.