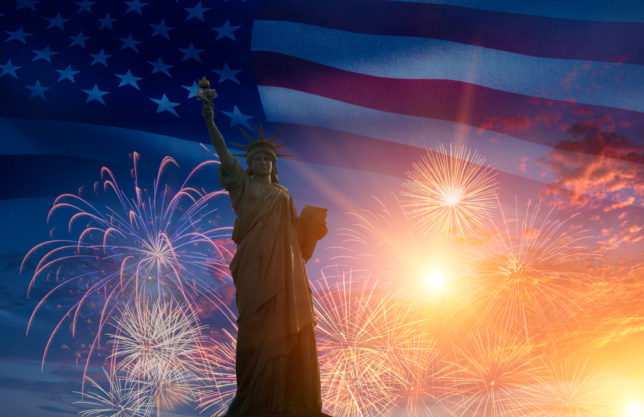 Probably no other document has better captured (and stirred) the innate human desire for freedom in the hearts and minds of men and women around the world than the Declaration of Independence.

On July 4, 1918, near the end of World War I, Winston Churchill gave a speech in London in honor of the 142nd anniversary of the Declaration of Independence, lauding its brilliance and universality as only Churchill could. We reproduce the text of his speech below:

I move that the following resolution be cabled from the meeting as a greeting to the President and people of the United States of America:

This meeting of the Anglo-Saxon Fellowship assembled in London on the 4th of July, 1918, sends to the President and people of the United States their heartfelt greetings on the 142nd anniversary of the Declaration of American Independence. They rejoice that the love of liberty and justice on which the American nation was founded should in the present time of trial have united the whole English-speaking family in a brotherhood of arms.

We are met here to-day at Westminster to celebrate the national festival of the American people and the 142nd anniversary of the Declaration of Independence. We are met here also as brothers-in-arms facing for a righteous cause grave injuries and perils and passing through times of exceptional anxiety and suffering. We therefore seek to draw from the past history of our race inspiration and comfort to cheer our hearts and fortify and purify our resolution and our comradeship.

A great harmony exists between the spirit and language of the Declaration of Independence and all we are fighting for now. A similar harmony exists between the principles of that Declaration and all that the British people have wished to stand for, and have in fact achieved at last both here at home and in the self-governing Dominions of the Crown.

The Declaration of Independence is not only an American document. It follows on Magna Carta and the Bill of Rights as the third great title-deed on which the liberties of the English-speaking people are founded. By it we lost an Empire, but by it we also preserved an Empire. By applying its principles and learning its lesson we have maintained our communion with the powerful Commonwealths our children have established beyond the seas.

Wherever men seek to frame politics or constitutions which safeguard the citizen, be he rich or poor, on the one hand from the shame of despotism, on the other from the miseries of anarchy, which combine personal freedom with respect for law and love of country, it is to the inspiration which originally sprang from the English soil and from the Anglo-Saxon mind that they will inevitably recur. We therefore join in perfect sincerity and simplicity with our American kith and kin in celebrating the auspicious and glorious anniversary of their nationhood.