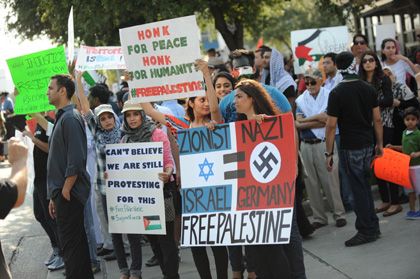 With heated protests throughout Israel, the arrest of American journalist Peter Beinart, and the tentative ceasefire of the latest ballistic exchange between Hamas and the Israeli government; the Israeli/Palestinian conflict remains one of the premier issues on the global stage. Within the United States, the debate remains heated as different interest groups fight for the hearts and minds of the American people. One of these organizations funding outspoken activists is the little-known, but surprisingly influential Moriah Fund.

Big name donors like George Soros and Tom Steyer cast long shadows. But the Efroymson family stays out of the philanthropic limelight, even though they fund many left-wing causes such as undermining Israel in its ongoing conflict with Palestine and supporting for Roe v. Wade.

The Moriah Fund was established in 1985 by Robert and Clarence Efroymson, separate from their namesake philanthropy, the Efroymson Family Fund, a donor advised fund of the Central Indiana Community Foundation. The donor advised fund prides itself on contributing to local artistic and environmental projects. It places little emphasis on political ideology. Contrast this wholesome philanthropic venture with the Moriah Fund, which supports a more ideological set of initiatives. Its goal to become a vehicle for social justice on the surface sounds as glittering as it is vague, ranging from ephemeral economic justice, to woman’s issues, and of course, fostering democracy in Israel, the black sheep of the middle east.

The Moriah Fund describes itself as having a philosophy “rooted in fundamental Jewish values,” such as supporting the disadvantaged. But its grantmaking pattern looks a lot like other left-wing social justice agendas.

Give­n how often the Israel/Palestinian conflict gains media attention, these various organizations have a variety of opportunities to exert influence. The New Israel fund has supported the recent protests against the Israeli Nation-state Law, a largely symbolic redeclaration that Israel was and is a state for the Jewish people. The results from these advocacy groups funded through the Moriah Fund have been subtle, but effective within the Democratic Party, as it has been shown that among Democrats, pro-Israel positions have dropped from 43 percent in 2016 to just 27 percent today.

To be fair, not everything the Moriah Fund supports is necessarily leftist. In 2016, the nonprofit contributed to the Capital City Public Charter Schools organization in Washington, D.C. as well as the charter school program Hebrew Public (financial records show it stopped providing grants to them in 2017).

However, the Moriah Fund provides a steady stream of funding to left-wing policy organizations that lobby for abortion-on-demand, environmental regulation, and other leftist issues. And while the Moriah Fund is inconspicuous when compared to many larger left-wing funders (such as the Ford Foundation), the nonprofit has ties to notorious groups on the professional Left such as the Tides Center, Democracy Alliance, and Planned Parenthood. In fact, former Center for American Progress executive vice president and Obama administration staffer Melody Barnes served as a Moriah Fund board member from 2003-2007.

The Moriah Fund rarely donates more than $100,000 in a single grant to a specific program or group; but what it lacks in quantity, it makes up for in frequency. The group has granted a stunning $58.6 million to hundreds of different programs since 2013, granting $8.8 million in 2017 alone.

This is just a snapshot of the Fund’s overall giving in 2017:

Since each individual contribution is relatively small, its impact is subtle, but its strength is dispersed among all of the different groups it funds to further its left-wing agenda. Upon close inspection, a careful observer will find that the Efroymson family’s intricate web of financial contributions totals over $80.4 million in assets according to its self-reported financial information.

The Moriah Fund’s strong advocacy for abortion and sex education in the American public education system aligns with other left-wing funders who object to abstinence-only sex education and downgrade the importance of marriage to family life—often as “part of an explicit strategy for policy reform.” It also provides funds to the Planned Parenthood of Metropolitan Washington D.C., the National Network of Abortion Funds, and the D.C. Abortion Fund—which “pays for the abortions that federal law prevents the city government from funding.”

The debate around reproductive rights and sexual education is in the news cycle again as the Senate prepares to confirm Judge Brett Kavanaugh as the next associate justice of the U.S. Supreme Court. In 2017, the Moriah Fund made grants to groups dedicated to opposing new Supreme Court nominees based on a judge’s likely opinion on Roe v. Wade. These groups include Urge and the National Women’s Law Center, receiving $65,000 and $50,000 respectively.

For decades, the Moriah Fund has operated under the radar, but it has nevertheless been instrumental in funding and maintaining a plethora of progressive programs without undergoing public scrutiny. The fund’s success should remind the public that the most influential groups might not belong to George Soros or Tom Steyer—they could belong to an obscure family without a major public persona.