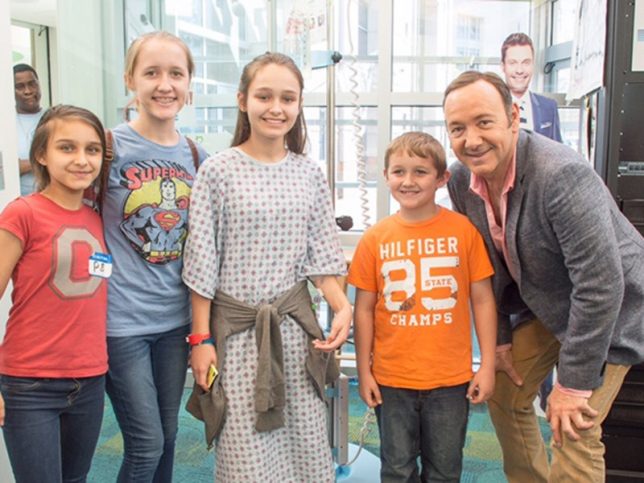 The history of political and sexual hypocrisy as typified by Weinstein and Spacey seems to fit into a broader Hollywood-Media Industrial Complex pattern of deeply ingrained corruption. Image credit: goo.gl/RMPfu7.
by Hayden Ludwig

Summary: Horrific sexual harassment revelations have recently exposed several Hollywood bigwigs for the predatory hypocrites they really are. But the hypocrisy rampant among entertainment elites extends to their political activism.

The current wave of Harvey Weinstein-induced sleaze affecting Hollywood is nothing new: the city has held a reputation for moral seediness at least since the probable murder of producer Thomas H. Ince on William Randolph Hearst’s yacht in 1924. Hollywood producers have periodically reveled in exposing the dark side of their industry, and over the years have released any number of self-flagellating exposés depicting the film industry—as the BBC nicely puts it—“as a hellish cesspool of corruption, murder, and insanity.”

Movies like Show People (1928), What Price Hollywood (1932), Sunset Boulevard (1950), The Bad and the Beautiful (1952), Beyond the Valley of the Dolls (1970), and The Player (1992), among others, take a view ranging from satirical to sinister of reputed Hollywood decadence and degeneracy. Indeed, the Coen Brothers’ Barton Fink (1991) depicts filmmaking as the exclusive enterprise of madmen.

Blatant sexism and sexual exploitation of talent is a recurring Hollywood theme. Stories abound of the infamous “casting couch,” an illicit piece of furniture upon which sexual favors were demanded of actresses by producers and directors in exchange for professional preferment. Indeed, most actresses can recollect cringe-inducing casting calls, with casting directors offering crass remarks like, “Her cleavage is her best feature.” According to Hollywood professionals posting on the website Casting Call Project, a platform for actors and actresses to report their casting horror stories, it isn’t uncommon to find female roles described as “the dream of any teenage boy, sexy yet wholesome, perfect physique, and always eager to please her man.”

Fitting squarely into this sordid history are reports of influential executives like Harvey Weinstein cajoling female employees into sexual acts with money, promises of career advancement, or outright threats of physical violence.

While it would be unfair to say vulgarity is the singular domain of Hollywood, the ability of film industry executives to depict themselves as devoted feminists while at the same time they call for “whores for a Quentin Tarantino project” is probably unique in corporate America. One anonymous source relates his experience as a Hollywood agent and manager; his employers would regularly ask him to rate women’s looks on a scale of 1 to 10 when considering taking them on as clients. Isn’t it ironic that the nation’s most left-wing for-profit industry is also the most exploitative of women – while coming under the least fire for workplace sexism?

Hollywood’s dishonesty over worker treatment doesn’t end with sexism, of course: Many Hollywood stars are among the most vocal proponents of the national campaign to double the federal minimum wage from $7.25 to $15 per hour. The so-called Fight for $15, the brainchild of the gargantuan Service Employees International Union (SEIU), has been hailed as a moral imperative by left-wing, coastal elites, who call it a “living wage” for workers.

Again, ironies abound: Picket sign-wielding stars, such as Tim Robbins, Ed Harris, and Helen Mirren joined some 350 people in a March 2015 strike in North Hollywood to demand the Actors’ Equity Association (a union) oppose a contract requiring small theaters to pay actors minimum wage for performances. “We want change,” the protesters cried, “but not this change!”

“This would kill almost all 99-seat theaters,” an actor and Chicago theater owner later whined. In an open letter penned by numerous actors opposed to the minimum wage rule, they wrote,

Scores of beloved theaters would be forced to double or triple their budgets overnight in order to give actors a drastic pay raise. Tiny theaters on micro-budgets would be hard-pressed to meet such a sudden new requirement.

It’s worth noting that the devastating minimum wage they protested was $10 per hour; the Fight for $15 was still on the horizon.

Actor Alec Baldwin supports minimum wage hikes… except when they interfere with his busy celebrity schedule. Caught in a vicious traffic jam caused by an April 2015 sit-in protest for a “living wage” in New York City, a serially annoyed Baldwin tweeted out his frustration:

There are ways to rally people to your cause without inconveniencing an entire City.

Life in NY is hard enough as is. The goal is not to make it more so. How clogging rush hour traffic from 59th St to 42 do any good?

Meanwhile, worker abuse runs deep in the film industry. While A-list actors regularly make headlines for their eye-popping salaries, low-level employees—often hired as 1099 independent contractors to avoid being paid employee benefits as full-time workers—regularly report exploitative practices. California lawmakers frequently exempt the film industry from collective bargaining agreements and other expensive labor regulations. Under California law, almost all employers are required to grant workers paid sick leave; private contractors hired for state building contracts cannot ask workers about their criminal history; and companies have tight rules about paying fired workers in a collective bargaining agreement. The film industry is exempt from all of the above laws.

An April 2010 Reuters story likens the entire film industry to a caste system, with production assistants—often (illegally) unpaid—denigrated as “untouchables.”

They’re some of the youngest and most abused workers in the industry. Most are paid minimum wage, but hundreds of stories by former PAs recount producers who get around wage requirements by calling them “interns”—despite assigning them 10-hour workdays and professional duties. It’s thinly veiled deception; one unpaid “internship” posted on the website Craigslist calls for

…those who feel comfortable with/and have: Camera/equipment knowledge; camera set up, working closely with DP; lighting set up; transporting equipment and heavy lifting.

Producers are incentivized to shave off labor costs wherever possible. Outsourcing animation jobs that used to be performed in-studio to small animation shops (often located offshore) is common, according to Steve Hulett, a former Disney animation writer. So are fear tactics designed to intimidate workers into working excessive hours each week for poor pay. Hulett writes,

This isn’t to say people don’t make pretty good money, but [they’re] working seven days a week, 14 hours a day, and so their hourly [wage] isn’t all that high. Instead of judging on a 40-hours per week, you’re looking at 80-to-90 hours a week.

In the next installment of Hypocrisy, Thy Name is Hollywood, we investigate why Hollywood elites flock to the Democratic Party – their choice for promoting the film industry’s interests.