Hypocrisy, Thy Name is Hollywood: All the World’s a Stage 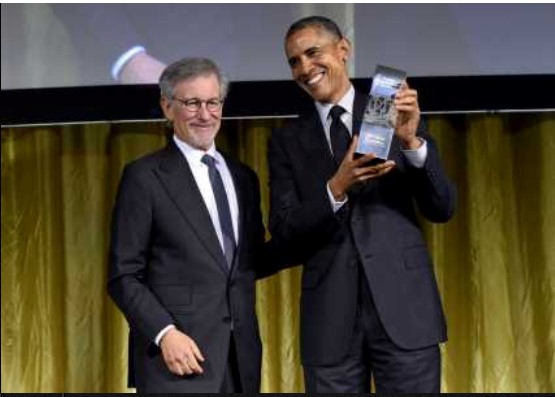 Summary: Horrific sexual harassment revelations have recently exposed several Hollywood bigwigs for the predatory hypocrites they really are. If so many film industry elites don’t practice the politics they preach, why do they support the Democratic Party? The answer: money.

The entertainment industry is infamous for producing vocal crusaders for the Democratic Party and left-wing causes who use their money and media access to promote their radical politics. The oodles of money flowing through the industry further incentivizes Democrats to cater to movie producers and actors.

Hollywood stars were salient supporters of Barack Obama’s 2008 presidential campaign. For the president’s 2012 reelection, actors, producers, and musicians held some 25 or so fundraisers with ticket prices ranging as high as $35,800 per couple—money that directly fueled his campaign. The list of celebrities who fawningly hosted or attended Obama’s fundraisers is measureless, with names like director Steven Spielberg, Dreamworks Animation producer Jeffrey Katzenberg, and actors Robert De Niro, Whoopi Goldberg, and Ellen DeGeneres appearing most prominently. In terms of dollars raised, the largest event was hosted by actor George Clooney at his Hollywood manse, where roughly 150 guests ponied up an estimated $15 million—the most lucrative single-event fundraiser in the history of presidential campaigns!

On the other hand, Republican presidential nominee Mitt Romney, received a meager $100,000 or so from wealthy celebrities in 2012, according to the Center for Responsive Politics. And he found scant support in the film industry—the most prominent of which were producer Jerry Bruckheimer and actor Robert Duvall.

But while the Hollywood Left may sound ultraprogressive, its donations demonstrate a preference for Establishment-friendly Democrats. Reporting by the Los Angeles Times in October 2015 showed that, while Hollywood donors were vocally split over the candidates in the 2016 Democratic Party primary, 90 percent of the $5 million in donations from the industry went to Hillary Clinton. That analysis broke the spending down further, revealing that $3,508,100—over 70 percent—of these Clinton donations came from just four men: Steven Spielberg, Jeffrey Katzenberg, Saban Entertainment CEO Haim Saban, and director J.J. Abrams. By March 31, 2016, that figure had risen to $8.4 million split between the Clinton campaign and its main superPAC, Priorities USA Action. Not counted in that sum, though, are proceeds from two fundraisers held by George Clooney in which tickets for couples were sold for as much as $353,000, again raising an estimated $15 million, according to Reuters.

By contrast, all Republican presidential primary candidates combined barely broke $460,000 in donations from the entertainment industry.

It isn’t just the A-list stars who fund Democratic Party candidates. According to data from the Center for Responsive Politics, entertainment and media company employees are roughly six times more likely to donate to Democrats than they are to Republicans. Even employees of the major conservative news conglomerate Fox News are more likely to support Democrats than Republicans for public office, based on their political contributions.

All the World’s a Stage

It’s clear that most of Hollywood is ideologically at odds with the Republican Party, but the Democratic Party’s support for increased regulations seems at odds with the business side of movie-making. If they’re interested in promoting social freedoms and their business profits, why don’t the stars and producers support pro-marijuana, pro-business libertarians? More to the point, why are film executives—who often use the rhetoric of Bernie Sanders-esque progressives—such big supporters of mainstream Democrats?

Here self-interest is perhaps a better explanation than vice. The film industry is a lucrative, well-connected special interest, and entirely capitalist in nature. Movie moguls have secure ties to the California state legislature in part because the industry is such an icon. But many states and many foreign governments find the lure of drawing film studios away from the Golden State irresistible. Since film production is highly mobile and can be done just about anywhere, all the world’s a stage for enterprising filmmakers.

Many governments simply pay studios to shoot within their borders. Foreign countries and U.S. states offer a bevy of incentives to movie producers, including tax credits and shelters, cash rebates, and government-sponsored film grants. The vacation island of Fiji, for instance, offers a whopping 47 percent tax rebate on production money spent in the country. HBO’s Game of Thrones is partially shot in Dubrovnik, Croatia, for another generous rebate. Often these come with hitches designed to benefit the local economy. Estonia, for example, offers studios a hefty 30 percent cash rebate for film productions—but only if the story is set in Estonia, or makes use of Estonian-based filmmakers, actors, or production crew.

In the United States, movie production incentives (MPIs) are popular with state officials who view them as lures for job growth, though history shows they often disappoint. According to a 2016 report by the California Legislative Analyst’s Office, the Golden State spent a gargantuan $800 million in credits for the film industry from 2009-2014. It’s an absurd figure considering about 1-in-3 projects that received generous California MPIs would have been filmed there without the credit, anyway. And while the spending did modestly boost the state’s economy, it only did so by roughly $1 billion in a $2.5 trillion economy, or “no more than a few hundredths of a percentage point.” (The film industry in California, it should be noted, is worth about $50 billion.) Nevertheless, in July 2014, 29 California congressional Democrats asked Sacramento legislators to increase the state’s film credit program, which quickly tripled from $100 million to $330 million, even as California’s total share of U.S. post-production jobs declined from 65 to 61 percent from 2004 to 2012.

To be fair, most states with aggressive MPIs (particularly California) only established the programs in response to a rising number of U.S. studios choosing to film in foreign countries. And though the use of MPIs has diminished in states with budget-slashing administrations, like Illinois under Republican Gov. Bruce Rauner, a majority of states still use them.

Meanwhile, numerous reports show that states aren’t getting their money’s worth. According to the Tax Foundation, when Michigan legislators analyzed the state’s MPI return on investment it “discovered they were distributing over $100,000 for every full-time equivalent position created by film credits.”

What’s worse, very little accountability exists for how this money is spent. According to the California Franchise Tax Board, taxpaying studios often claim the same credit more than once; and the agency admits that no “comprehensive, accurate accounting of all tax credit” exists From the September 2016 report:

Without comprehensive, accurate, and timely data, it is unclear to us how well the state can ascertain that credits are not being claimed more than once.

What’s more, these credits often drag states into multi-billion-dollar bidding wars with other governments in the U.S. and Canada eager to attract filmmakers. It sometimes creates truly peculiar scenarios. The New York-based filmmaker Martin Scorsese’s 2014 picture, The Wolf of Wall Street, is set in New York’s financial district. It got $30 million in subsidies to film… in New York.

The first two seasons of the Netflix series House of Cards received state subsidies totaling some $31 million to film in Maryland.

The first two seasons of the Netflix series House of Cards received state subsidies totaling some $31 million to film in Maryland (it’s set in nearby Washington, D.C.). Then the film studio postponed filming the third season, according to a February 2014 article in the Washington Post—telling Maryland Governor Martin O’Malley that “the filming schedule for Season 3 ha[d] been pushed back to June to ensure that a big enough [credit] increase ha[d] been approved.” Legislators weren’t pleased:

“We hope that they won’t,” said Dominick E. Murray, secretary of the state Department of Business and Economic Development.

The company wasn’t bound to Maryland, and was clear that it “would move elsewhere if the subsidies weren’t improved,” writes the senior editor of the Manhattan Institute’s City Journal. “The legislature caved.”

All of this, of course, was funded by Maryland taxpayers—and was ultimately a waste of money, as recent events have shown: House of Cards producers cancelled the show in light of the revelations in star Kevin Spacey’s predatory past.

In the final installment of Hypocrisy, Thy Name is Hollywood, we examine the growing importance of selling movies in China, and how it’s shaping free speech in American films.