Hypocrisy, Thy Name is Hollywood: Charity-Washing on the Silver Screen 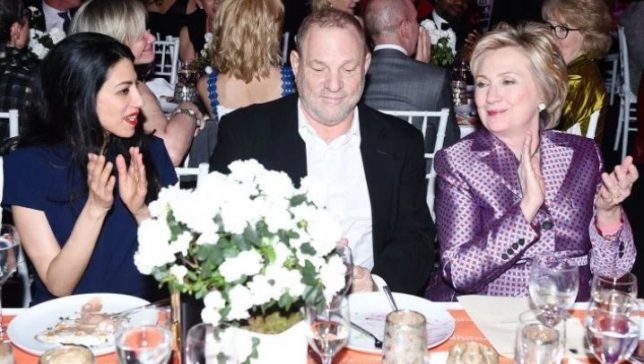 Harvey Weinstein seated between Hillary Clinton and Huma Abedin, a top aide. A donor to Clinton’s 2016 presidential campaign, Weinstein was cited by the Hollywood Reporter as joining a number of actresses in his standing ovation for Clinton’s speech. Image credit: goo.gl/7YJYcT.
by Hayden Ludwig

Summary: Horrific sexual harassment revelations have recently exposed several Hollywood bigwigs for the predatory hypocrites they really are. For many entertainment elites, using the language of progressive selflessness is de rigueur; but behind the mask is a well-connected machine that uses politics to advance private business interests and the media to glamorize its image and cover up a tawdry history of sexual crimes.

“Do unto others what you don’t want done to yourself” might serve as a maxim for the supposedly highbrow actors, directors, and executives who preach Progressivism without living it or really understanding what they’re preaching. Thankfully, most Americans pay more attention to Hollywood’s movies than to the self-inflated opinions of its stars—but recent events show, painfully, that they should be more aware of who’s creating the entertainment products they consume.

Allegations of rape and sexual harassment against Hollywood mega-producer Harvey Weinstein, founder of Miramax, and a cluster of powerful celebrities have exposed what CRC’s president Scott Walter calls “charity-washing,” or using philanthropy to mask hypocrisy and malfeasance. This second “Hurricane Harvey” has unleashed a torrent of disturbing revelations about the industry’s seedy side, and revealed Hollywood’s ever-hollow core.

The Hollywood-Media Industrial Complex and Hypocrisy

Since early October, scores of men and women have come forward with accusations of rape, molestation, and sexual harassment at the hands of an ever-growing list of actors, directors, and producers.

Beginning with Harvey Weinstein, the Hollywood sex scandal has widened almost daily to include allegations against—among others—director James Toback, producer Brett Ratner, actors Kevin Spacey and Ben Affleck, and journalists Michael Oreskes (Senior Vice President of News at National Public Radio) and Lockhart Steele (director at Vox, a liberal online outlet). If true, the allegations of unwelcome groping, sexual harassment, and rape are revolting enough; but the most galling aspect of the drama is the blatant hypocrisy of many of the accused, who claim to be ardent feminists and champions of women’s rights.

It’s blatant charity-washing: using nonprofits and political activism to push an agenda that has no bearing on the way you actually live your life.

…and I believe, as you do, that trusting and valuing women is the right and moral position to take.

A donor to Clinton’s 2016 presidential campaign, Weinstein was cited by the Hollywood Reporter as joining a number of actresses in his standing ovation for Clinton’s speech. The ironies inherent in this moment, both from the point of view of the speaker, whose husband’s abusive treatment of women is well known, and the applauder, an about-to-be exposed serial abuser, boggles the mind.

Another instance of Weinstein’s charity washing can be seen in his position as a “fixture” (Bloomberg) on the board of the Robin Hood Foundation, which calls itself one of New York’s largest poverty-fighting nonprofits. According to information on Robin Hood’s website, the foundation provides grants to at least a dozen groups focused on helping women.

Academy Award-winning actor Kevin Spacey has also been implicated in decades of abusive behavior, with at least one accuser detailing lewd advances made to him in 1986, when he was age 14. The incident seems sadly typical of Spacey’s predatory behavior: he’s been accused of propositioning a male undergraduate in the late 1990s, groping filmmaker Tony Montana in 2003, and preying on young men at the Old Vic Theatre in London, where he was the artistic director for 11 years. Particularly disturbing in light of Spacey’s alleged child abuse is his charity washing work through the Kevin Spacey Foundation, which defines its mission as supporting “school children, young people and emerging artists in the performing arts and film.”

But the history of political and sexual hypocrisy as typified by Weinstein and Spacey seems to fit into a broader Hollywood-Media Industrial Complex pattern of deeply ingrained corruption. The entertainment elite, often woefully uninformed, are nevertheless given a stage to voice their left-wing political views by a sympathetic media, which celebrates their celebrity and validates their stances on progressive issues like feminism, climate change, and income inequality.

Celebrity-obsessed media feeds the already massive egos of the very people they cover, thus providing content and spurring supporters of the Democratic Party into action. Meanwhile dirty deeds directly opposed to stated beliefs and values go down in the half-light.

In the next installment of Hypocrisy, Thy Name is Hollywood, we expose how entertainment elites’ hypocrisy extends to their political activism.