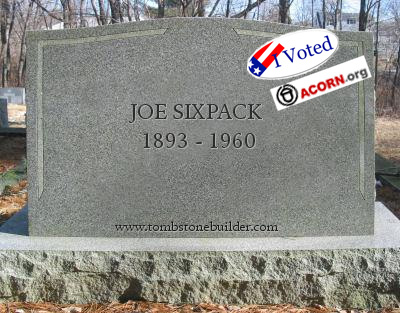 You’ve got to expect obfuscation from professional obfuscators.

Not surprisingly, the spin doctors at the Huffington Post microscopically lawyered my post Media Matters-style to attempt to get away from the fact that Project Vote is a vital part of left-wing ACORN’s empire of vote fraud and political agitation. (And incidentally, for 30 years ACORN has been laying the groundwork for the subprime mortgage meltdown.)

And as I write this post, news is circulating that police in Las Vegas, Nevada, raided the local ACORN office. Authorities allege that ACORN canvassers “falsified forms with bogus names, fake addresses or famous personalities.” The Las Vegas Review-Journal reports “that most members of the Dallas Cowboys appeared to be registering in Nevada to vote in November’s general election.” And in Ohio, ACORN admits voter fraud is just part of doing business.

Meanwhile, the HuffPost denies that Project Vote is now and has for years been the voter mobilization arm of ACORN. But now that ACORN is getting bad press by the bushel, HuffPost writer Seth Colter Walls argues that when Barack Obama ran Project Vote in 1992 it wasn’t technically a part of ACORN. (Background: Walls’s original post criticizing Seton Motley of the Media Research Center is here; Motley’s post in response is here; and my post in response to Walls’s original post is here.)

Walls produces statements from the Obama campaign and Obama supporters at the ostensibly nonpartisan Project Vote who –surprise, surprise— proffer an invented claim that Project Vote and ACORN didn’t become closely aligned until 1994, which is after they say Obama left Project Vote. Of course there is no credible evidence we’re aware of that substantiates the claim. The HuffPost hasn’t provided any.

Walls’s article is meant to serve as a distraction from the fact that Obama has long been directly involved with ACORN. And unlike the HuffPost, we have proof.

An article by Toni Foulkes of ACORN dispels all doubt. In the article, “Case Study: Chicago-The Barack Obama Campaign,” which appeared in Social Policy magazine in 2004, Foulkes makes it abundantly clear that ACORN and Project Vote were partners in the voter registration drive.

The blog Sweetness & Light has reprinted the text of the article. In a discussion of the primary race in March 2004, Foulkes writes:

Obama started building the base years before. For instance, ACORN noticed him when he was organizing on the far south side of the city with the Developing Communities Project. He was a very good organizer. When he returned from law school, we asked him to help us with a lawsuit to challenge the state of Illinois’ refusal to abide by the National Voting Rights Act, also known as motor voter. Allied only with the state of Mississippi, Illinois had been refusing to allow mass-based voter registration according to the new law. Obama took the case, known as ACORN vs. Edgar (the name of the Republican governor at the time) and we won. Obama then went on to run a voter registration project with Project VOTE in 1992 that made it possible for Carol Moseley Braun to win the Senate that year. Project VOTE delivered 50,000 newly registered voters in that campaign (ACORN delivered about 5000 of them).

Since then, we have invited Obama to our leadership training sessions to run the session on power every year, and, as a result, many of our newly developing leaders got to know him before he ever ran for office. Thus, it was natural for many of us to be active volunteers in his first campaign for State Senate and then his failed bid for U.S. Congress in 1996. By the time he ran for U.S. Senate, we were old friends. And along about early March, we started to see that the African-American community had made its move: when Sen. Obama’s name was mentioned at our Southside Summit meeting with 700 people in attendance from three southside communities, the crowd went crazy. With about a week to go before the election, it was very clear how the African-American community would vote. But would they vote in high enough numbers?

It seemed to us that what Obama needed in the March primary was what we always work to deliver anyway: increased turnout in our ACORN communities. ACORN is active on the south and west sides of Chicago, in the south suburbs and on the east side of Springfield, the state capital. Most of the turf where we organize in is African American, with a growing Latino presence in Chicago’s Little Village and the suburbs. [emphasis added above]

So Obama was right there in the thick of things, organizing for ACORN/Project Vote, representing ACORN in court at its specific invitation and leading ACORN training seminars.

It’s worth noting that groups on the extreme left, such as ACORN’s Project Vote, often have many tentacles. That’s the way they organize themselves. They often have overlapping memberships and interlocking directorates. They align themselves in strategic coalitions all the time. Sometimes they have formal mergers and sometimes they have strategic partnerships. This is their modus operandi. 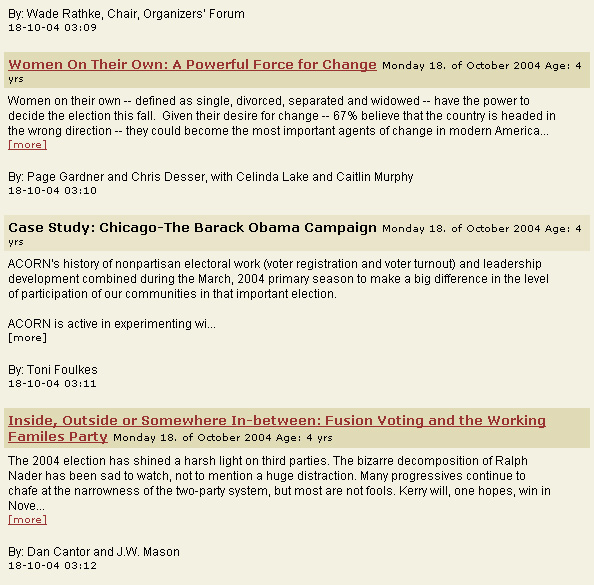 The titles of articles that are available are highlighted in a brownish color. The title of the Foulkes article, however, appears in black letters indicating that access has been denied.

Guess who’s behind Social Policy magazine? Something called The Institute for Social Justice. The website indicates the address of the magazine is 1024 Elysian Fields Avenue, New Orleans, Louisiana 70117. Here is a screen grab of the address from the website: 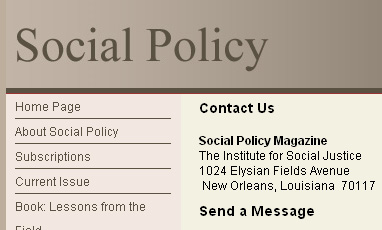 Guess who else lives in Elysian Fields? ACORN.

Go to Sweetness & Light blog and scroll down to the Form 990s (tax returns for nonprofits) and you will see that both ACORN and Project Vote report the same address, 1024 Elysian Fields Avenue, New Orleans, Louisiana  70117.

There is also more evidence of the close relationship between Project Vote and ACORN in 1992.

We did find this item on Nexis from The Hotline dated October 8, 1992. The short article is called “VOTER REGISTRATION: PROJECT VOTE! TARGETS URBAN SWING AREAS.” It begins:

Sandy Newman, exec. dir of Project VOTE!, a national non-partisan, non-profit voter participation organization which targets African-American communities, announced that registration efforts have added “over a half million” new voters to the rolls — “most of them in swing presidential states with close Senate races,” including IL, PA, MI, OH, NY, CA, MD and CT.

It indicates that in New York City in October 1992 Project Vote was either part of or closely aligned with ACORN. The exact wording of the relevant paragraph is:

A recent article by Lynn Sweet of the Chicago Tribune (Oct. 6) also lumps ACORN and Project Vote circa 1992 together:

Though officially non-partisan, the focus of the ACORN/Project Vote voter drive was on groups leaning Democratic in the presidential contest: African American, young, Latino and low income earners.

Maybe Sweet didn’t get the memo from the HuffPost.