How the Left Created Nikolas Cruz 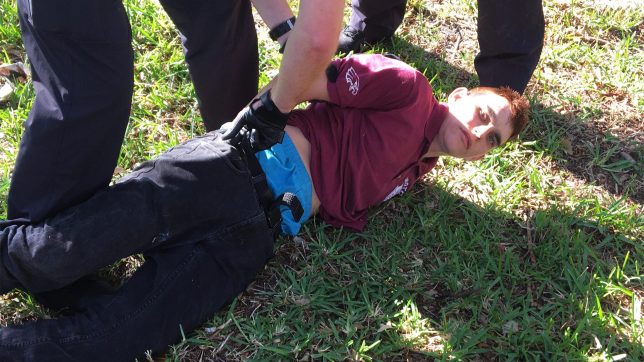 This piece first appeared in American Thinker on April 2, 2018.

Did you know that the same reckless juvenile delinquency policies that effectively green-lighted high school spree-killer Nikolas Cruz’s descent into infamy are now in effect all across America?

No organization has done more to keep juvenile offenders across the nation on the streets instead of behind bars than the Baltimore-based Annie E. Casey Foundation, which was created in 1948 by UPS founder James E. Casey and his siblings in honor of their mother.

The Casey Foundation now brags that its Juvenile Detention Alternatives Initiative (JDAI) “has grown to become the most widely replicated juvenile justice reform initiative in the United States, reaching youth in more than 300 local jurisdictions across 39 states and the District of Columbia.”  Approximately 10 million young people aged 10 to 17 live in these communities.

The Casey Foundation also boasts in a recent report that there were in excess of “3,800 fewer youth in detention on an average day in 2016 than before those sites undertook JDAI — a reduction of 43 percent.”

This is reason to celebrate – if you want America to slide into chaos.

But Broward County isn’t just one of many outposts of soft-headed thinking about juvenile justice reform: It is Ground Zero for the anti-incarceration movement that tries to keep all but those young offenders accused of the most serious crimes in society where they can perfect their skills as they become recidivists.  For a quarter century, Broward has been showing the way in reversing what left-wingers fancifully call the “school-to-prison pipeline” by wrongfully keeping young sociopaths out of jail.

JDAI has its origins in Broward County.  The program began in 1993, growing out of a lawsuit that claimed the county’s juvenile facility was overcrowded.

Capital Research Center reported eight years ago on the dangers presented by the program.  A paper stated:

Broward County officials responded to the suit with a series of measures that would later form the core JDAI guidelines.  They devised a test to screen arrested youths, determining which young people needed to stay in detention awaiting trial for violent offenses or because they posed a flight risk, and which could be channeled into alternatives such as home monitoring.

The JDAI approach is unduly focused on the well-being of the offenders, as opposed to their victims and society as a whole.  To progressives, young people committing crimes is no social crisis.  The real crisis is that the young people who are committing crimes are being caught and prosecuted.  To these leftists, modern-day America is a horrifying Dickensian dystopia of institutional cruelty that persecutes the young, minorities, and the poor.

Around the time JDAI was getting started, law professors David Wexler and Bruce Winick coined the term “therapeutic jurisprudence,” which certainly seems to cover JDAI.  The expression can be defined as “an interdisciplinary method of legal scholarship that aims to reform the law in order to positively impact the psychological well-being of the accused person.”  In other words, the legal system should exist primarily for social work benefitting perpetrators, not for dispensing justice.  This is fine by unrepentant Marxist terrorists and academics Bill Ayers and Bernardine Dohrn who praised JDAI by name in their book, Race Course Against White Supremacy.

Casey Foundation officials, who hand out large sums to state and local governments and activist groups, as well as JDAI staff and their co-religionists in municipal and county juvenile justice systems, assert that there is a statistical correlation between detention and incarceration.

[D]etention itself has a significant negative impact on delinquency cases.   Research has shown that detained youth are more likely to be formally charged, found delinquent, and committed to youth corrections facilities than similarly situated youngsters…  [y]outh detained pending court were three times as likely to be committed to a corrections facility as youth with identical offending histories who were not detained.  Detention, therefore, might be thought of as the slippery slope into juvenile justice’s deep end.

The problem with this kind of thinking is that correlation does not imply causation.

It stands to reason that the young people detained by authorities are those most likely to be convicted of crime and to re-offend later.  Detention itself does not generate crime; bad behavior leads to incarceration and more lawbreaking.

Ironically, at one point, the Annie E. Casey Foundation website itself embraced political violence.  It used to feature “articles lauding protesters who try to prevent the construction or expansion of juvenile detention centers.”

We have to wonder what kind of a person runs a program as perverse as JDAI.

Bart Lubow, its director from 1994 to 2014, has a track record of pro-criminal activism.

In 1975 he was held for questioning after “three members of the Black Liberation Army on trial for the murder of two New York City policemen somehow managed while in custody to obtain explosives and weapons hidden in legal envelopes.”  Lubow was detained because he was thought to know how the perpetrators obtained the weaponry.

The New York Times reported “that in 1972, while he was providing legal counsel to minority American sailors in the Philippines, Lubow was deported for attempting to distribute communist and anti-government literature.”

Not surprisingly, he loudly opposed the tough-on-crime measures pursued by Rudolph Giuliani (R), then the mayor of New York City, that many credit with cleaning up and resurrecting a troubled metropolis.

Lubow has also been involved in pushing something called the “deliberate indifference” legal strategy promoted by the W.K. Kellogg Foundation of Battle Creek, Michigan.

The argument is that “when policymakers implement rules known to be injurious to a certain group when non-injurious alternatives are available, they are acting with ‘deliberate indifference’ to that group’s constitutional rights.”  If these people can find courts that agree with this absurd line of thinking, most or perhaps all juvenile detention could suddenly become unconstitutional.

That massive philanthropic pool of close to $12 billion isn’t likely to be spent on good things that benefit society.  A fair-sized chunk of it will go to keep young adults like Nikolas Cruz out of the justice system.  Given the size and scope of JDAI, it stands to reason that there are many more troubled teenagers like Cruz out there right now, shielded and coddled by law enforcement officials like Sheriff Israel.  How many more Americans will die because of the Casey Foundation’s disastrous juvenile justice program?

If Cruz had experienced any kind of meaningful contact with the criminal justice system in Broward County it is possible his killing spree could have been avoided.

Sheriff Israel’s office was besieged with tips and complaints about Cruz.

“This kid exhibited every single known red flag, from killing animals to having a cache of weapons to disruptive behavior to saying he wanted to be a school shooter,” Broward County Public Defender Howard Finkelstein told the New York Times.

“If this isn’t a person who should have gotten someone’s attention, I don’t know who is. This was a multisystem failure.”

If Israel’s office had taken the Cruz case seriously, perhaps he wouldn’t have been able to purchase the weaponry he used against his former classmates.

“He had a clean record, so alarm bells didn’t go off when they looked him up in the system,” said veteran FBI agent Michael Biasello.  “He probably wouldn’t have been able to buy the murder weapon if the school had referred him to law enforcement.”

Of course, it is also true, as Paul Sperry reports, that Obama administration policies encouraging relaxed school discipline have allowed “thousands of troubled, often violent, students to commit crimes without legal consequence.”  The flawed approach to juvenile justice goes back to the 1990s and seems to have been inspired by radical academics in the tumultuous 1960s, a decade historian Paul Johnson aptly dubbed “America’s suicide attempt.”

Radical sociologists Richard Cloward and Lloyd Ohlin argued in their 1960 book, Delinquency and Opportunity: A Theory of Delinquent Gangs, that capitalism creates criminals.  Poor inner-city youth were only rationally pursuing their own self-interest when they committed crimes.  Delinquency was caused by poverty, which denied would-be criminals opportunities for economic advancement, or so their thinking went.

Cloward and his wife, academic Frances Fox Piven, wrote a book titled Poor People’s Movements: Why They Succeed, How They Fail, in which they argued criminals are either misunderstood, freedom fighters, or perhaps both.  When a poor person commits a crime it is a justifiable act of rebellion worthy of sympathy, if not support.  In their upside-down Marxist world, it is simultaneously a cry for help and for revolution.

The couple decried the social tendency to apply “the pejorative labels of illegality and violence” to describe “defiance by the lower classes.”  Using these “labels” glosses over the fact that the poor are trapped in “a structure of political coercion inherent in the everyday life of the lower classes.”

And so, hidden behind farfetched social theories, distortions, euphemisms, and lies, the Juvenile Detention Alternatives Initiative has given a generation of young criminals like Nikolas Cruz permission to wreak havoc.