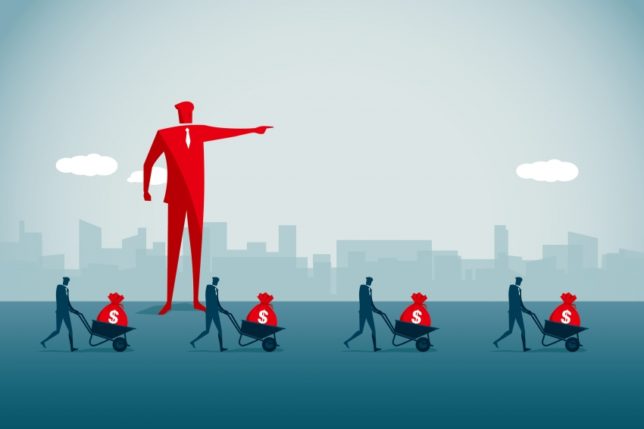 ISTOCK as appears on www.philanthropy.com
by CRC Staff

This article first appeared in the Chronicle of Philanthropy on December 4, 2019.

Among wealthy donors and foundation heads there is a growing belief that capitalism, the financial engine that put Ford cars in driveways and Hewlett-Packard printers on office desktops nationwide needs to be rewired. The relentless pressure on companies to serve up quarterly profits to shareholders has widened the gap between the superrich and the rest of the country, they say, and made one of philanthropy’s main jobs — fixing social problems — even harder.

What’s needed, according to an expanding chorus of philanthropy leaders, is a change in the economic system itself.

They’re calling for a new code of business ethics, expanded employee ownership of corporations, and rule changes that would put the environment and equitable distribution of wealth on the same footing as making a profit.

The Ford Foundation’s Darren Walker has been among the most vocal on the issue. Capitalism doesn’t need to be a “winner-take-all system,” he wrote in From Generosity to Justice, a book the foundation published this fall. He makes the case for an “inclusive capitalism” in which more than just a narrow circle of shareholders benefit from a rising stock market. Capitalism only works, Walker argues, if it works for everyone, and philanthropy has an obligation to help make that happen.

Walker isn’t singing solo. In recent months, billionaire Marc Benioff declared that capitalism, the system that turned his company Salesforce into a tech powerhouse, was, in effect, dead because of the inequality it had created. Jean Case, chief executive of the Case Foundation, which owes its millions to the success of America Online, chimed in, heralding the coming of a “Capitalism 2.0” which ditches the free-market absolutism that has driven some corporate purists.

And Rockefeller Foundation President Rajiv Shah, speaking at the Global Inclusive Growth Summit in Washington in October, lamented “tax policies that have consistently preferenced capital over labor over the past several decades.” He also argued that society has grown “comfortably numb and deferential to businesses that aggregate and sell our data and information.”

Corporate leaders hear the rumblings. In August, 181 members of the Business Roundtable, a powerhouse group of CEOs of large U.S. companies, issued a statement rejecting the notion that shareholder returns should be corporate America’s overriding objective. Their new mission statement includes concern for workers, treatment of vendors, health of the environment, and the stability of the communities where they do business.

Foundation leaders are taking a number of approaches to try to ensure that the change really happens. Walker served as an adviser to the Business Roundtable as it devised its new credo. Ford is pushing to get more business leaders on board and making the case that a socially conscious business doesn’t have to sacrifice financial returns.

Facebook co-founder Chris Hughes wants to break up corporate giants. In October, his Economic Security Project announced the creation of a $10 million fund that will be used to support legal and economic research and advocacy campaigns designed to check corporate power. Donors include the Nathan Cummings, Ford, Hewlett, and Knight foundations, as well as George Soros’s Open Society Foundations and Pierre Omidyar’s Omidyar Network. (The Hewlett Foundation is a financial supporter of the Chronicle of Philanthropy.)

The Kendeda Fund has committed more than $24 million to groups trying to increase the number and awareness of worker-owned companies, such as Evergreen Cooperative Laundry.

Some grant makers, including the Kendeda Fund, which was founded by Diana Blank, the former wife of Home Depot co-founder Arthur Blank, have made grants to organizations that give workers more say in running the companies that employ them.

Making those changes in a few select business sectors is minor compared to the task of securing shifts among publicly traded companies that do business in the global market, admits Diane Ives, Kendeda’s adviser for people, place, and planet. Currently only about 450 worker-owned cooperatives exist in the United States. But, she says, the number of startups and business conversions is growing. She hopes Kendeda’s grants can help build a network of worker-owned businesses that advocate for employee-friendly regulations and that distribute profits to employees and benefit the cities where they work.

“There are a lot of motivations for running a business. Profit is not the only one,” she says. “Transitioning to employee ownership allows a business owner to tap into some of those other values, like an appreciation for the work force and the role the business plays in the community.”

While attitudes about capitalism have changed in some quarters, and the issue has taken center stage among Democrats running for the White House, the movement to overhaul capitalism faces stiff headwinds. The Business Roundtable’s broadened definition of corporate purpose was savaged by many business leaders and the Wall Street Journal editorial board, which warned that it would do nothing to “appease the socialists.”

Even corporate leaders calling for a change in the market mind-set, such as Ajay Banga, chief executive of MasterCard, admit that it’s impossible to ignore the main purpose of a business: making money. Banga took the stage at an event in Washington in September to tout his vision of an “inclusive capitalism,” where corporate leaders are driven by a “decency quotient.” But, he told the crowd, businesses are not philanthropies and should never be confused as such.

Scott Walter, president of Capital Research Center, a conservative think tank that focuses on philanthropy, noted that huge foundations like Ford wouldn’t exist without the wealth generated by free-market capitalism.

“If the Ford Foundation’s money is so badly tainted, perhaps they should start on a swift course of no longer possessing it,” Walter says. “Let’s redistribute it.”

Nonprofits and grant makers often bristle when management experts suggest they operate more like a business, he notes. So when a nonprofit or foundation executive, even one like Walker, who sits on the board of PepsiCo, suggests how corporations should be managed, they are similarly overstepping, Walter says.

“I don’t think Mr. Walker or the average foundation executive has a deep understanding of the way businesses operate, and to dictate that they should operate differently seems like a combination of ignorance and arrogance,” he says.

For Walker and the Ford Foundation, the key is to get buy-in from the companies whose behavior they want to change. Over the past year and a half, as the Business Roundtable developed its approach to shareholder primacy, Ford met with several business organizations to discuss how companies might prosper in a “new capitalism.”

The result was Imperative 21, a coalition of six business groups that are current and former Ford grantees: the B Lab, the B Team, the Center for Inclusive Capitalism, Chief Executives for Corporate Purpose, Conscious Capitalism, and Just Capital. In total, the group represents 72,000 companies. Members of Chief Executives for Corporate Purpose alone generate more than $6.6 trillion in annual revenues.

Imperative 21 plans to provide business leaders with research on the financial benefits of thinking beyond the interests of shareholders, says Jay Coen Gilbert, co-founder of B Lab. The idea is to reorient businesses’ culture and attitude away from short-term financial results and get managers and investors interested in whether a company creates a public benefit as well.

But the focus on the “narrative” of a new capitalism relies on a few “heroic leaders” to make a difference, says Coen Gilbert. Socially conscious CEOs, he says, cannot make a difference through sheer will; they must work within a system that rewards their efforts to improve the world.

Recognizing that, the Imperative 21 discussions evolved — right around the same time the Business Roundtable leaders issued their statement — to focus on providing corporate leaders with incentives to keep in mind workers, the environment, and local economies.

Coen Gilbert declined to go into specifics, but changes in what information businesses report to the public, and altering their governance policies, could be more effective than a group of corporate honchos looking to do better. “When good intentions are in conflict with incentives, the incentive structures typically win,” he says. “It’s not a super fair fight.”

The current dominance of free-market thinking has its roots in the work of Milton Friedman and other economists who advocated a reduced role of government in the economy, allowing individuals as much freedom as possible to run businesses and maximize their profits. During the Cold War, when Friedman’s approach was ascendant, neoliberalism had an effective story to tell Americans because it promoted liberty in the face of a Communist menace.

Returning to a Keynesian model, in which government plays a big role in the economy, as it did during the New Deal, isn’t necessarily the best option, says Jennifer Harris, a senior fellow for special projects at the Hewlett Foundation. But any new approach, she suggests, has to put equality on equal footing with liberty.

Harris is halfway through a two-year, $10 million exploratory effort Hewlett created to build an intellectual framework to replace capitalism as it currently exists. She has been working with other foundation leaders to come up with ideas on how to promote a different worldview.

She points out that Friedman’s laissez-faire acolytes were supported by philanthropic investments from donors including Richard Mellon Scaife and Charles Koch in university programs and think tanks. Broad changes in the economic system, she says, can once again be nudged in a new direction by philanthropy.

Specific policy changes are possible, she says, such as rethinking antitrust rules to weaken the power of internet companies or an approach to climate change that looks to government dollars rather than market power.

For those ideas to gain steam, they have to become an accepted part of the debate among a broad swath of the public, Harris says.

“You can make really good policy strides, but unless they’re happening within a larger set of shared understanding that crosses the political parties, it’s always going to be two inches forward, two inches back,” she says.

The Omidyar Network is similarly exploring ideas for what could replace free-market dominance. About a year ago, the philanthropy reset its overall strategy and launched a $20 million commitment to “reimagining capitalism.” In addition to contributing to Chris Hughes’s Anti-Monopoly Fund, the grant maker is throwing its weight behind efforts at think tanks including the Roosevelt Institute and the Washington Center for Equitable Growth to find ways to make sure more people benefit from the economy and rethink how economic gains are measured.

Omidyar has also supported policy change. It has provided grants to the Workers Lab, an organization that aims to give workers more power. Omidyar also backs Clean Slate for Worker Power, a program at Harvard University that will present a proposed revamp of national labor policy in January. Omidyar is also pushing for rules to allow employees to unionize industrywide, rather than employer by employer.

Major change will not come through corporate statements of goodwill, Kubzansky says. It will require a hard examination of whether a rising economy has led to the best outcomes for the majority of people and a major shift in the balance of economic power.

“The set of assumptions we have been working under are well past their sell-by date,” he says. “The rules of the game need to get rewritten.”

Alex Daniels covers foundations, donor-advised funds, fundraising research, and tax issues for the Chronicle. He recently wrote about grant making that gives grantees more power in decision-making and about the distribution of $1 billion to four research institutions. Email Alex or follow him on Twitter.