Global warming alarmists claim to have discovered a huge pocket of methane gas that is trapped under the Arctic Ocean.  As the Arctic Ocean warms up due to global climate change, these methane gas pockets will slowly be released into the environment causing CATASTROPHIC damage.  Methane, they claim, is 20 times more damaging to the environment than carbon dioxide.  Thus, the alarmists, staying true to their cause, dub this the methane ‘time bomb.’  A little extreme, don’t you think?

It is ironic that alarmists would begin to worry about methane being released into the environment now, considering methane has been released for years from the BS science they pursue and the BS alarmism they champion.  These pockets of methane are certainly not man-made pockets of greenhouse gases (GHG).  That such pockets exist might even constitute strong evidence that rising and falling levels of GHG are a result of natural processes rather than man-made pollution.  Indeed, the presence of methane is quite natural occurrence, as everyone knows.  Methane production occurs naturally in plants, animals, and non-living things. At the very least, this hardly seems like the kind of issue to issue panicky proclamations about. Rather than jumping to the ‘time bomb’ conclusion that the greenies like so much, we could hold off and see what the science tells us. What is wrong with taking things slowly and rationally instead of trumpeting a conclusion and then being forced to support it, regardless of the evidence?

Maybe the alarmists are getting this one right though.  Maybe we should overreact to avoid the ‘time bomb.’  One possible solution would be to simply destroy all methane producers (since its so dangerous) for the sake of the planet.  If we did this, then, at the very least, this envirowacko would be right about something: 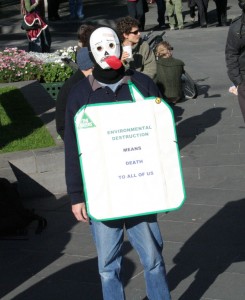