Global Cooling is on the way! Give up your freedom NOW!

Here’s the opening of a New York Times article: “The question is again being discussed whether recent and long-continued observations do not point to the advent of a second glacial period, when the countries now basking in the fostering warmth of a tropical sun will ultimately give way to the perennial frost and snow of the polar regions.” The date: February 24, 1895. A subhead on the article noted: “Geologists Think the World May Be Frozen Up Again.”

By the 1930s, the concern had shifted. “NEXT GREAT DELUGE FORECAST BY SCIENCE / Melting Polar Ice Caps to Raise the Level of Seas and Flood the Continents,” proclaimed the New York Times, May 15, 1932.

By the 1970s, we we were back to Global Cooling. “Get a grip on your long johns, cold weather haters – the worst may be yet to come. That’s the long-range weather forecast being given out by ‘climatologists,’ the people who study very long-term world weather trends.” So reported the Washington Post in a January 11, 1970 article entitled “Colder Winters Held [sic] Dawn of New Ice Age / Scientists See Ice Age In the Future.” The article continued:

Some of them [climatologists] say the world is in a ‘cold snap’ that started in 1950 and which could last hundreds of years, even bringing on the start of another Ice Age.

In the meantime, it could mean more snow, and more arctic freezes like the one Washington is now shivering through.

Ice floes will continue to close in around Iceland; glaciers in the Pacific northwest will grow; there will be major changes in farming patterns – and colder late season football games.

The New York Times reported in a May 21, 1975 article, “Scientists Ask Why World Climate Is Changing; Major Cooling May Be Ahead,” that “Sooner or later a major cooling of the climate is widely considered inevitable. Hints that it may already have begun are evident. The drop in mean temperatures since 1950 in the Northern Hemisphere has been sufficient, for example, to shorten Britain’s growing season for crops by two weeks. . . The first half of this century has apparently been the warmest period since the ‘hot spell’ between 5,000 and 7,000 years ago immediately following the last ice age.” (That warm period in the first half of the century would have been prior to the period when human-caused Greenhouse Gas emissions are supposed to have warmed up the climate.) 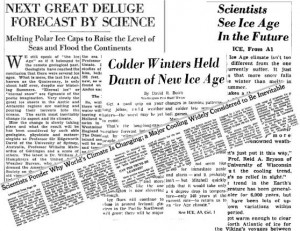 Throughout the 1970s, the news media, citing the reports of scientists, warned us that we were headed into a new Ice Age. A small sampling of the headlines, taken from a longer list compiled by Popular Technology:

The approaching Ice Age was often cited as a reason for taking away people’s rights and expanding the power of government. An example appeared January 26, 1970 in the Owosso, Michigan Argus-Press, the Uniontown, Pennsylvania Evening Standard, and a number of other papers :

. . . [I]f by now we are accustomed, if not inured, to the physical threat of pollution, along comes a warning there may also be dire political consequences.

Dr Arnold Reitze, an expert in the legal aspects from Cleveland’s Case Western Reserve University, suggests pollution, or the effort to control it, could be fatal to our concept of a free society.

As likely inevitable restraints on the individual and mass, Reitze suggests:

In Reitze’s view, “We will be forced to sacrifice democracy by the laws that will protect us from further pollution.”

Today, those steps are said to be necessary to save us from Global Warming. Bigger government and less freedom: No matter what the problem, the solution is always the same.