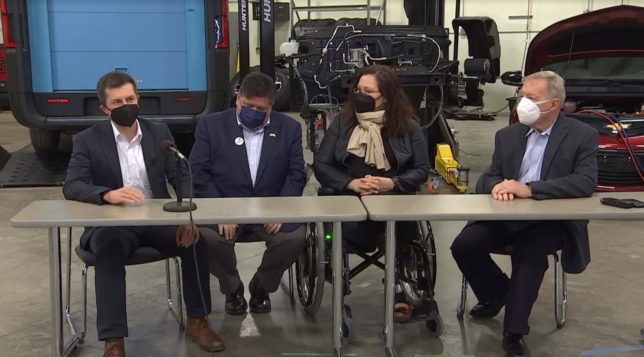 Once known as a cutthroat investor and “the man who broke the Bank of England,” George Soros’s reputation as a man of international finance has been somewhat eclipsed in recent years by his reputation as a political powerbroker and philanthropist.

George is still an investor at heart, though, so when the Soros Fund Management, Soros’s personal investing vehicle in the United States, is deep in the red on one of its largest-ever investments, it’s noteworthy.

In late 2021, reports began to surface that Soros had made a massive investment in Rivian Automotive, a start-up electric vehicle (EV) manufacturer. The company, which went public in November 2021, was anticipated as an exciting new competitor in the electric vehicle market, and major companies like Amazon (20 percent of the company) and Ford (12 percent) scooped up huge chunks of shares. But the star of the show in the initial round of investing was George Soros.

Soros bought far less than other investors, just 19.8 million shares or 2 percent of the company. What made his investment stand out was the price tag of over $2 billion, which instantly made it Soros Fund Management’s largest investment, possibly ever. In fact, shares of Rivian now reportedly make up nearly one-third of Soros Fund Management’s total assets, a huge gamble to make on one company.

Perhaps Soros believed that his involvement and reputation would make the stock an instant success among speculators, or perhaps he believed that with the backing of giants like Ford and Amazon the company was simply too big to fail. Whatever the reasons, Soros’s confidence in the company has not been rewarded so far (though time will tell). When Soros bought in, Rivian shares were priced somewhere between $100 and $170 per share. Now, shares are selling for less than $34 (closed at $36.26 on April 20, 2022).

Rivian was also forced to raise the prices of its two vehicle models, a pickup truck and an SUV, by roughly 20 percent, greatly upsetting investors. This led investors to recently file a class action lawsuit against the company.

Despite the announcement of a Rivian mega-factory to be built near Atlanta, Georgia, rising gas prices, and growing demand for electric vehicles, Rivian shares have continued to plummet. The value of Soros’s shares has decreased by more than 65 percent ($1.3 billion) in just a few months. This is immense, even for Soros, whose net worth is $8.6 billion according to the latest estimates.

Worse yet, for the first time ever a respected stock broker, Exane BNP Paribas, has given Rivian a “sell” rating, indicating a belief that share values will continue to decrease.

Soros isn’t one to take immense losses lying down, though, and if anyone has a trick or two hidden up his sleeve it’s him.

Who Will Stop the Bleed?

Soros is not shy about admitting he has used his power as a public figure to manipulate markets to make money in the past, so it seems logical that he might also use his influence as a philanthropist and political donor today to recover from potentially his largest losses ever.

Soros was a major supporter of Democrats and the Biden Administration in 2020, giving tens of millions to political action committees (PACs) supporting Democrats during the election cycle. In turn, as part of their environmental agenda, Democrats and Biden have been staunch advocates for the electric vehicle industry, and for Rivian specifically.

The Biden administration has signed orders calling for 50 percent of all new vehicles to be EVs or plug-in hybrids by 2030 and made $5 billion available to create a nationwide network of EV-charging stations. It has also proposed dramatically expanding tax credits for electric vehicles in ways that would benefit Rivian, but not foreign competitors.

Biden has been criticized multiple times for neglecting to work with or mention Tesla, the nation’s largest electric vehicle manufacturer. Accordingly, he has repeatedly applauded Rivian and Ford, one of Rivian’s largest shareholders, for their work in the electric vehicle industry, despite their much lower production. In February 2022, Biden commended Rivian in a speech, calling it “an innovative younger [company]” that builds electric trucks. A month later in his State of the Union address, Biden applauded Ford, which owns 12 percent of Rivian, for investing billions in electric vehicle manufacturing, while conspicuously neglecting to mention Tesla.

The Center for American Progress (CAP), which has received millions in funding from Soros, has also published reports calling for federal investment in electric vehicle manufacturing. CAP continues to support the failed Build Back Better Act, which the CAP Action Fund lobbied for, specifically praising the bill’s provisions to extend and expand electric vehicle tax credits by several thousand dollars. Rivian itself issued statements supporting the measure, though it disputed an additional tax credit that was limited exclusively to union-manufactured cars. (Rivian’s factories are currently non-union.)

The Economic Policy Institute and the Institute for Policy Studies, which have each received $1 million or more from Soros, co-authored a 2021 letter from 100 organizations calling for Congress to pass the Build Back Better Act. Signers included CAP, Center for Community Change Action, and numerous other Soros-funded groups.

While left-leaning groups supporting generic left-leaning legislation is not remarkable, Soros’s financial maneuvering to position himself to potentially gain from the legislation his own grantees are pushing certainly is. It seems to fit in perfectly with Soros’s track record of using his influence to manipulate markets and governments to make a few (billion) bucks.

A Story to Watch

Rivian is a young company, and perhaps Soros’s investment will turn out to be profitable in the years to come, only time will tell. While much is uncertain about the company’s future, where George Soros is involved, political intrigue is sure to follow.

In the months after Rivian’s stock price began its dramatic descent, George Soros announced one of his largest political expenditures ever, perhaps the largest ever, when he poured $125 million into his Democracy PAC. Perhaps, in hopes of digging himself out from his immense potential losses, Soros is preparing for all out political warfare to ensure a favorable policy environment for his largest investment.

Whatever happens, Soros, Soros-backed politicians, and particularly Soros’s philanthropic empire should be watched closely for any meddling in the electric vehicle industry or the environmental policies affecting the automotive industry as a whole.