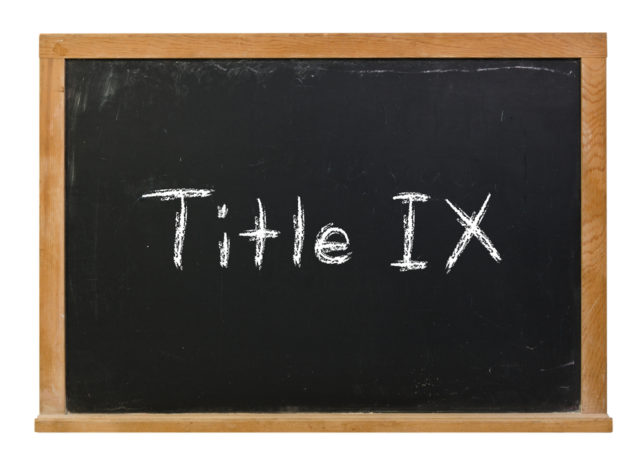 The Biden Administration was recently handed a temporary defeat by Federal District Court Judge Charles Atchley, when he blocked the Education Department’s latest Title IX guidance regulations. This injunction is not just a major blow to the Biden Administration, but also a major blow to the Left’s most influential powerbrokers who have been funding groups that secretly set the agenda for Biden behind the scenes, namely George Soros and teachers unions.

In April of this year Capital Research Center (CRC) alerted Fox News to the existence of a secret organization called Governing for Impact (GFI), which had received nearly $13 million exclusively from George Soros and had been working since 2019 to write new federal regulations for the Biden administration to issue. Hiding in the massive $1.7 billion Arabella Advisors network (which CRC was also the first to expose), the group intentionally operated under the radar for years with a tight-knit circle of associates at its helm, writing dozens of complex policy memorandums and using high-level contacts within the Biden administration to get the government to act on “more than 20” of its policy recommendations.

Governing for Impact is the ultimate example of the “dark money” the Left pretends to hate. It works totally in secret, it’s funded by one billionaire, it’s run by that billionaire’s cronies, and it directly influences policy from the shadows. The idea that a group so deeply in Soros’s pocket is calling the shots on regulations that will affect the education and safety of almost every child in the country is deeply disturbing and should be investigated at once.

As predicted, the Biden administration did announce sweeping changes to Title IX, and the proposed changes seem to pull directly from GFI policy papers.

As Fox News reported back in April:

The Education Department is set to announce a new regulation that will change Title IX rules on anti-transgender bias in schools, reversing Trump-era guidance. GFI appears to have worked on the issue, as its site contains a November 2020 legal memo on the matter.

The Education Department, like GFI, wants to make two key changes to Title IX. First, it would change the rules for investigations of sexual assault allegations. Second, it would expand Title IX’s protections for women to cover any discrimination against a student’s gender identity. GFI has written policy papers recommending both changes.

In “Addressing Sexual Violence Under Title IX of the Education Amendments of 1972,” GFI advised the Education Department to repeal a Trump-era regulation that required colleges to provide students accused of sexual harassment with live case hearings, the opportunity to cross-examine accusers, and written summaries of the evidence presented against them.

Education Secretary Betsy DeVos first issued the regulations in 2020 because, as KC Johnson, professor of history at Brooklyn College put it: “A well-intentioned policy initiative designed to ensure that survivors of sexual assault would not lose their access to education had wound up producing an entirely separate class of victims—students who were punished after dubious or false findings of guilt.”

Biden’s proposed, and blocked, rule changes would implement almost every action item in GFI’s memorandum. If enacted, the changes would have reverted campus Title IX procedures back to glorified kangaroo courts. KC Johnson and other academics have warned the changes would create a “Title IX Inquisition” on college campuses from which nobody would be safe.

In a second memo, “Protecting the Rights of LGBTQ+ Students Under Title IX of the Education Amendments of 1972,” GFI also advises the Education Department to issue a clarification that it will interpret Title IX protections to extend to a student’s gender identity. The administration has now proposed to do exactly that.

In April 2022, Sarah Perry, senior legal fellow at the Heritage Foundation, warned that women’s opportunities in college will be “jeopardized by the inclusion of biological males in their chosen athletic programs. How backward it is to take a women’s movement ‘win’ and subjugate it to a ‘loss’ to the agenda of the radical few.”

The materials from the GFI memos show that Perry’s phrase “agenda of the radical few” is an apt description. The Biden administration isn’t just enforcing an ideology. It’s following written instructions.

Although it worked in secret, GFI did not work alone.

At the head of every single GFI education policy memorandum are two names: Governing for Impact and the National Student Legal Defense Network (NSLDN). The NSLDN is a left-of-center advocacy group focused largely on college-debt forgiveness. The group helped GFI write a policy memorandum proposing student-loan forgiveness for the permanently disabled, which the Biden administration appears to have acted on.

It turns out, the NSLDN doesn’t just work for students. It works for teachers as well.

During this period, we now know that NSLDN was hard at work alongside GFI secretly developing education regulations for the incoming administration. Meanwhile, the teachers unions were loudly calling for the exact same policy changes that GFI and NSLDN would co-create.

In 2020, AFT president Randi Weingarten publicly declared AFT’s opposition to the rule changes that reigned in the Title IX kangaroo courts, baselessly accusing Secretary DeVos of promoting a “boys will be boys” culture. The NEA also strongly opposed the rule change and, coincidentally, the group both unions paid a combined $250,000 helped write the very policy that repealed it.

The AFT and NEA have also been vocal supporters of allowing transgender males to compete in women’s sports and cancelling student debt, other areas that GFI policy memorandums have specifically addressed.

Biden’s Title IX reforms have been years in the making and were developed through an unusual commingling of cash from teachers unions and George Soros.

Reports of the Biden Administration allowing teachers unions to write the CDC’s school-reopening guidelines during the COVID-19 pandemic have made Big Labor’s domineering influence over the Biden administration common knowledge. But this combination of union and Soros influence is a new and disturbing development. Together, two of the most powerful forces on the Left have set their sights squarely on an important part of nearly every student’s life. If not for the intervention of the courts, this pair of subversive influencers would have foisted dangerous gender ideology and rabid “#metoo-ism” upon students from college all the way down to pre-K. While the legal battles rage on, it is more important now than ever before to understand and investigate where these radical ideas come who is behind them, and the troubling amount of influence left-wing mega-donors seem to wield over the current administration.