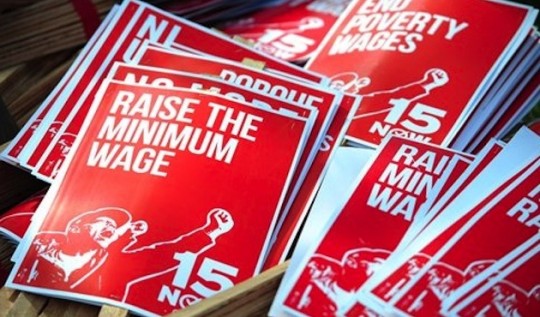 The left-wing hotbed of Seattle (home to the United States’ only openly Trotskyist lawmaker, Councilor Kshama Sawant) was among the first cities to pass the $15 per hour minimum wage demanded by the Service Employees International Union (SEIU) and local left-wing hypocritical businessman Nick Hanauer, dubbed “America’s worst minimum wage pundit” by Forbes writer Adam Ozimek. The City Council was sufficiently confident that they had repealed the law of supply and demand that they commissioned a study that they hoped would show other liberal cities that marching to the union tune was costless.

That study, conducted by researchers from the University of Washington, has now been released, and the results will not be to the Council’s, the union’s, or Mr. Hanauer’s liking. From the abstract:

Using a variety of methods to analyze employment in all sectors paying below a specified real hourly rate, we conclude that the second wage increase to $13 reduced hours worked in low-wage jobs by around 9 percent, while hourly wages in such jobs increased by around 3 percent. Consequently, total payroll fell for such jobs, implying that the minimum wage ordinance lowered low-wage employees’ earnings by an average of $125 per month in 2016.

In the words of the Washington Free Beacon’s Sonny Bunch, “Minimum Wage Hikes Kill Jobs, Duh.” Contrary to Mr. Hanauer’s confident assertion that economics is a “scam,” the evidence indicates that the laws of supply and demand are not subject to repeal by liberal or even Trotskyist legislators. Even the liberal-leaning data analysis site FiveThirtyEight was forced to concede that Seattle “may have hit that limit” of how high minimum wages can go before they hurt employment prospects.

The SEIU and its allies were taken aback by this entirely predictable result. Ben Zipperer, an economist at the SEIU-funded Economic Policy Institute, was incredulous when asked about the results by The Washington Post: “’Like, whoa, what? Where did you get this?’ asked Ben Zipperer, an economist at the left-leaning Economic Policy Institute (EPI) in Washington.”

Don’t expect the unions and liberal activists like Hanauer to step back after this result. The pursuit of union dues power and snarky champagne socialism are too much for one study—or any amount of employee pain—to derail.

It seems that there was more to this story than first reported. According to Seattle Weekly, the office of Mayor Ed Murray (D) was shown a pre-release version of the study and then (coincidentally we’re sure) very union-sympathetic researchers at the University of California, Berkeley released a review claiming everything was fine before the UW study was published. The Weekly reports:

To review, the timeline seems to have gone like this: The UW shares with City Hall an early draft of its study showing the minimum wage law is hurting the workers it was meant to help; the mayor’s office shares the study with researchers known to be sympathetic toward minimum wage laws, asking for feedback; those researchers release a report that’s high on Seattle’s minimum wage law just a week before the negative report comes out.

It’s not quite book-cooking, but there’s a clear effort by the unions to obscure the likely harmful effects of minimum wage increases like Seattle’s.